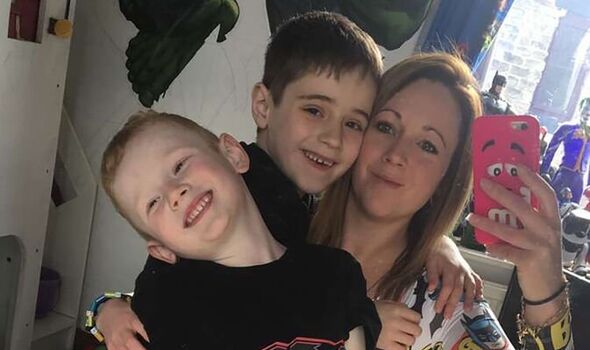 A mother has shared her heartbreak after her eight-year-old son was killed in a car crash on a motorway causedby his drug-driving father.

Vicky Consterdine said she has endured a “continuous nightmare” following the death of Blake, back-seat passenger in the BMW 3 Series which aquaplaned and collided with a lorry on the M60 with Leon Clarke, 40, behind the wheel.

Clarke was jailed for four years on Monday at Minshull Street Crown Court after admitting causing death by careless driving whilst over the drug driving limit. He was thirteen times the drug-driving limit, reports Manchester Evening News.

The dad also pleaded guilty to causing death by driving while uninsured.

Speaking after sentencing, Vicky paid tribute to her “loving” boy” who had a “bright future”. She also shared a cherished family photograph of her, Blake and his six-year-old brother Mason, who was also in the car at the time of the crash in Tameside, Greater Manchester.

During Blake’s funeral in February 2020, devastated Vicky screamed: “Please Blake, please wake up for mummy” at the coffin.

Speaking today, Vicky said: “Blake was cheeky, he was the joker, he was popular, and he was very clever, he had a bright future. Blake was sensitive, affectionate, protective of Mason, his friends and me.

“He loved school, so much so he couldn’t wait to get back to school on that Monday. He loved his friends, which he had from nursery. He enjoyed street dance, computer games and Lego. Blake loved life and loved his family.

“Having been told by the hospital that Blake had died and seeing Mason with minor injuries. I couldn’t understand how one of my children was okay and the other was dead.

“On the day of Blake’s funeral, he was lay in his coffin. I knew this would be the last time I would see Blake, kiss him and touch his skin. I was screaming, shouting at him ‘Please Blake, please wake up for mummy’.

“Blake and Mason didn’t get a choice or a chance that day after they left their nana’s, all the choices were made for them by their dad who they were both excited to see. He killed my precious Blake by the decisions he made on that day.

“My boys didn’t stand a chance. Now I live in a continuous nightmare that I’m yet to wake from. Mason has lost his best friend and I have lost my beautiful son, and the life and love I once had.”

Clarke had picked Blake and his little brother up from their grandparents’ home in Middleton, Greater Manchester, at about 1.40pm on the day of the tragedy.

As Clarke drove home along the M60, Blake was sitting in the back seat of the BMW 3 Series while Mason, aged six at the time, was a front seat passenger. It was raining heavily and there was a “significant amount” of water on the carriageway, the court heard.

The build-up of water is believed to have been caused by a blocked drain and signs on the motorway warned that it was “liable to flooding”.

As Clarke drove past junction 23, his BMW was estimated to be travelling at about 76mph in the outside lane. However, as he indicated to move left, he lost control of the vehicle.

“It’s clear that loss of control was caused by Mr Clarke aquaplaning on standing water across the carriageway,” prosecutor Robin Kitching told the court.

Clarke tried to brake but the BMW veered across three lanes before the rear of the vehicle collided with a highways maintenance lorry parked on the motorway’s hard shoulder. The truck had been called out to assess damage caused during another incident in which a vehicle aquaplaned earlier that day.

Other motorists stopped at the scene after witnessing the collision and pulled Blake and Mason from the BMW. While Mason suffered minor injuries, Blake was unconscious and had “serious head and internal injuries”.

Both boys were taken to Royal Manchester Children’s Hospital, where Blake was pronounced dead that same afternoon.

Following the incident, Clarke was arrested by police. Tests showed he had 680mg of benzoylecgonine, a metabolite of cocaine, in his blood – more than 13 times the legal limit of 50g. Clarke, of Rochdale, Greater Manchester, was also not insured to drive the BMW at the time of the incident, the court heard.