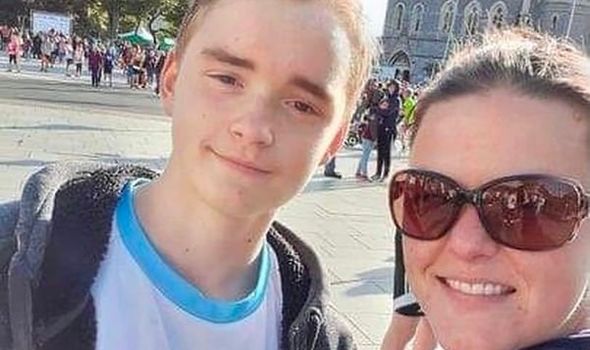 Abby Wiseman says Ethan was told by members of staff at Scott Medical and Healthcare College in Stoke, Plymouth, despite allegedly being aware of his anxiety. After Ethan refused to remove the ring, Abby claimed her son was excluded from class and she was told to expect official communication from the headteacher, on which she is still waiting.

The school has not commented on the individual incident, but has said it is expected that “all students present themselves in-line with school policies” and support is given to parents and students to ensure the correct uniform is worn.

But Abby is fuming, telling Plymouth Live the rules are “far-fetched” and unfair.

“It doesn’t seem to matter what I tell the school, they just don’t care because it’s about an image and he’s wearing a ring, yet staff can wear wedding bands, earrings and make-up,” Abby added.

“Excluding him for wearing a ring is a bit far-fetched.

“They have taken it too far, and it’s not really about looking after the children anymore, it’s about image. School is not about that.”

Ethan is in his final year and has exams at the school and college, which caters for approximately 400 children aged 13 to 19.

His family has informed the school about his anxiety, which Abby says hasn’t caused problems with previous management at the institution.

Abby, from Plymouth, continued: “It’s a plain band, like a wedding band and it spins. It doesn’t make any noise so when he is feeling anxious he spins it. It’s a distraction technique.

“When the previous headteacher was there, I went to him and spoke to him, gave him information on it and he was absolutely fine with it. He just wanted my son to be happy.

“He didn’t really care if that came from a ring or whatever, he was just all for his mental health and if that’s what he needed to keep him happy and in school.”

However, Abby received a phone call last week to inform her Ethan had been “put into the red” for refusing to take the ring off when requested.

The mum said: “The following day I was told Ethan was being ‘excluded’ and the headteacher would be in contact. When I spoke to my son about it, he said it was because he refused to take his ring off.

“He really wants to be in school.”

When contacted for comment, Will Smith, CEO of the Greenshaw Learning Trust who run the school said: “Our expectation is that all students present themselves in-line with school policies and Scott College offers support to parents and students to ensure the correct uniform is worn.

“We have proven experience in transforming schools and believe the key to success is to create a supportive and inclusive learning environment.

“If any students or parents have queries regarding our policies they should contact the school.”