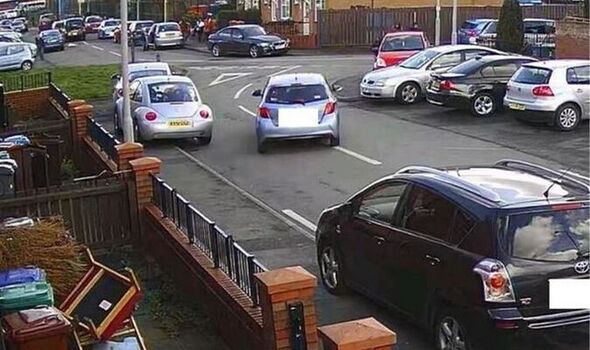 A frustrated homeowner has described how parents on the school run have blocked her driveway and even abused her when asked to move.

Laura Ali, 31, said she’s been told to “f*** off” and “shut up you s**g” when she asked drivers to move their vehicles from outside her home near two schools in Ardwick.

Speaking to the Manchester Evening News, Ms Ali said an angry motorist threatened to smash her windows after stopping her from taking her children to school. Residents on Langport Avenue have been plagued by years of motorists parking on pavements, junctions and even in the middle of the road.

In 2019 fed-up locals protested outside Dean Trust Ardwick secondary and St Luke’s CE Primary School over the ‘ridiculous’ parking by parents at pick-up and drop-off times. However, neighbours said the situation is still raging on as they shared photos of families being blockaded in.

Ms Ali said: “Why is the council not being proactive? I’ve approached parents that blocked me from taking my children to school, and been responded with ‘f*** off’ or ‘shut up you slag’, ‘we’ll smash your car window’ too many times in front of the school over the years.

“I’ve seen parents get into physical fights with each other on the street, shouting abusive language in front of the primary and secondary school kids.”

The fed-up mum said a child was hit by a car last month near the schools. She added: “We were glad to hear they weren’t seriously harmed but how many incidents need to happen before they resolve this issue we’ve pleaded about for years?”

Police have been called to the street to promote road safety and support residents, while Manchester City Council said they will be trialling ‘School Streets’ which create pedestrianised zones.

Ms Ali said: “I’m a vigilant driver and aware teenagers step out in front of cars but it’s not so much the kids that are a concern, it’s the parents shoving their prams in the road causing us to emergency stop and ‘effing’ off when they park in roads. It’s awful and we’re all tired of dealing with the awful behaviour the schools parents inflict on the local residents. We just want to feel safe on our doorstep.”

Sirous Fallahi, 32, who lives on Langport Avenue, has stepped in and put out cones along the street to try to prevent parking on double yellow lines. The 32-year-old security worker said: “A few years ago we protested over the parking by parents but nothing has changed and it’s getting seriously out of hand.

“What’s more concerning is the amount of times residents have addressed this issue to the school and they have deflected our concerns. The police show up and the atmosphere changes but when they leave the chaos resumes. It’s difficult for them to see how bad the issue is.

“We have made many suggestions with more signs, a crossing, cones out, and speed bumps for more safety measures. I’ve contacted the council and the school multiple times and said ‘they will investigate the issue’. It has continued for years and we’re all frustrated. It’s not fair on any of the residents and more importantly, children are being put at risk by their parents.”

Dean Trust Ardwick said it aims to work alongside the local community to minimise impact of these issues by regularly reminding parents to respect highway rules and regulations.

A spokesman for the secondary school said: “All Dean Trust schools always aim to work alongside it’s local communities to minimise the impact of these issues at school drop off/pick up times by asking and regularly reminding parents and carers to park respectfully observing highway rules and regulations. However, this can sometimes be beyond our control as we do not have any jurisdiction over public highways. We will continue to work with our Dean Trust Ardwick community to improve this situation.”

A spokesperson for Manchester City Council said: “The issue of on-street parking around schools is an issue the Council takes seriously and, in the past, has encouraged schools to put in place schemes which encourage walking and cycling to school. The Council will soon be trialling ‘School Streets’ which create a pedestrianised zone around schools as well as working with Greater Manchester Police to promote road safety around this school in particular.

“In roads where there are no parking restrictions the Council is limited in the action which can be taken. However, the Council will continue to work with our partners to prosecute drivers who park illegally and would encourage residents to contact us when they observe illegal parking.”

St Luke’s CE Primary School has been contacted for comment.