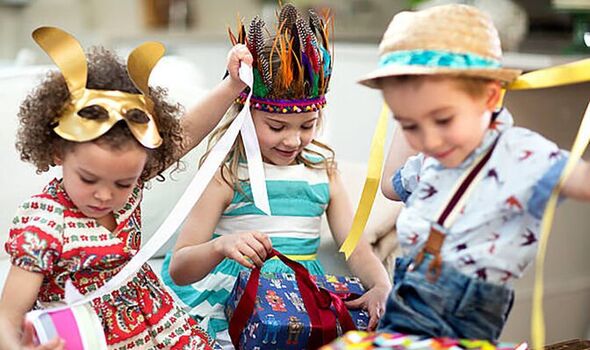 The mum took to social media forum Mumsnet to ask other parents if she was being unreasonable following the bash last week. While the anonymous parent admitted her son wasn’t overly bothered, she couldn’t help but fume over it herself.

The mum stated the same child attended her son’s birthday party earlier this year but didn’t bring a present.

She wrote: “A kid came to half of DS’s [Dear Son] party – he couldn’t make the activity so came for the pizza at a pizza restaurant – I obviously paid for all the pizzas.

“This kid brought no present, just a ‘card’ on a piece of paper he’d drawn on. He got a party bag at DS’s party. I felt like it was a little rude to come to a party with no present – but whatever, kids have enough cr** so they don’t need more – but this was a party where only five children were invited so it stuck out. I wouldn’t have noticed otherwise.

“This morning, DS went to that kid’s party, which was an activity, no food. About eight kids. At the end, there were “no party bags left” when it came to DS (he’s quite shy and not terribly pushy so would have waited until the end). DS obviously gave a present.

“AIBU [Am I being unreasonable] to find this pretty cheeky?!”

She doesn’t believe the family are having money issues, Edinburgh Live reports.

The parent added: “(Also – this family isn’t poor or having any money troubles. In fact, I’d call them well off. I know this for certain. Only mentioning in case people say they can’t afford a present or a party bag.) Anyway happy to be told that I’m being petty and annoying and should mentally shut up about it. I haven’t said anything to anyone and won’t but inside am thinking it’s rude. (DS isn’t especially bothered anymore but was sad at the time to be the only kid with no party bag.)”

But her post divided opinion among other parents across the UK.

Others pointed out that “just a card” was in fact a handmade one, which is more thoughtful and sweet.

But one user commented: “Does sound a bit off. I always made up enough bags and then a couple of spares in case errant siblings turned up.”

To which the original poster replied: “Same – I always have spares in case that happens or I am cr** at counting.”

Another mum replied: “Not the kid’s fault but that’s really awful. Isn’t standard party bag planning ‘prepare more bags than invitees, just in case? Sounds like they over invited and assumed there’d be some drop-outs.’

“What probably happened was that a sibling took one or was given one by their brother/sister, not realising that there wouldn’t be enough for siblings. I’ve had to guard party bags like a hawk and be in control of giving them out at the end of my DS’s parties as I’ve seen kids do this at others. Best thing to do now is not make a huge thing about it and say it would mostly be cake so let’s get some cake we like etc. He’ll have forgotten all about it soon.”