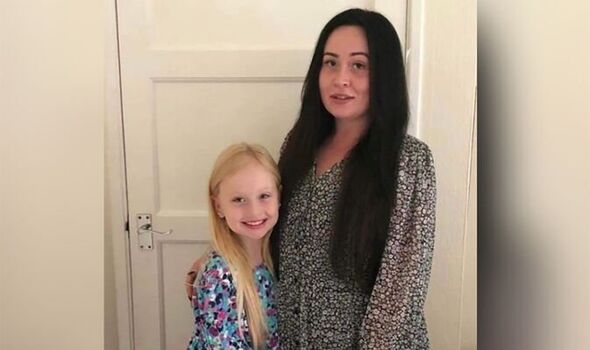 Eva Yeomans, eight, had her lessons at Meadow View Stables near Burton-upon-Trent, Staffordshire, cancelled after she became emotional on the ponies and “doubted her own ability to be able to do things”. This was brought on by Eva’s “additional needs”, her parents claim, as they’ve blasted the stables for the “absolutely disgusting” decision.

Meadow View Stables conceded Eva “enjoyed” the lessons at the start but said she became so “worried and emotional about riding” she “sometimes would pull on the mouth of the pony”.

It said Eva can return to groom the horses at the stables but riding them might be detrimental to their welfare.

“Is it hard for them to understand every child is different? Doesn’t it make them uncomfortable that she gets upset? We as her parents both then attended the farm in order to get some more answers. I then as her mother was greeted with, ‘well you don’t help during lessons either’. I as her mother do all that I can – in every single setting.”

Shan said Eva had learned new skills, and her confidence and knowledge had improved during the last 11 months.

The mother says the company has since shown “no regard for her feelings”.

She continued: “Our daughter was then offered to come up to the farm and groom the horses instead. They wanted me to tell a child with additional needs that she can no longer ride the horses that she has been for 11 months – ‘but don’t worry, you can brush them instead’.

“I don’t know on what planet they think that’s normal, but it’s not. I am completely disgusted by the way our daughter was treated, the way they as a company and human beings had no regard for her feelings, her mental health, no compassion as adults, women or parents. Absolutely disgusting.”

A spokesperson for Meadow View said: “Eva started lessons with us 11 months ago. At first, she got on well and was enjoying participating, however, over time she had become increasingly worried and emotional about riding, to the point where sometimes she would pull on the mouth of the pony she was riding, which is concerning for the welfare of the pony – and this is paramount to us as a caring yard.

“More recently she had even started screaming at her parents to get her off the pony, which escalated during her last lesson to the point where she refused to get on. At times her mother was equally upset and in tears herself and we understand how distressing that must have been, so we were keen to try to help her as we are as passionate about the children who ride with us as we are about our ponies’ safety.

“We understand that the customer believes that we have ‘kicked’ their child out of the riding school because of additional needs but this couldn’t be further from the truth. We have taught many children over the years with ADHD and autism, and we continue to do so. We weren’t aware that Eva had any additional needs at first, however, after five months this was brought to our attention, and we have endeavoured to support her as best we could.”

Shan, who says she has attended lessons to support her daughter, says Eva was taught to pull back on the reigns in order to stop the pony. “As a child, she may have sometimes pulled slightly harder than needed, but if that ever happened she was told right there and then from the teacher and then nothing was ever mentioned afterwards. She was there to learn how to ride the ponies, these were all things she was learning how to do,” she said.

She added: “The welfare of the ponies is always important, I would never reject that comment. In her last lesson as they put it, a pony stood on Eva’s foot while she was attempting to mount him to ride him, this naturally made her upset. She then got on the horse but knew she couldn’t ride because she couldn’t regain focus.

“So rather than wasting people’s time and confusing the horse, we decided to end the lesson there and leave. In my mind, we did the best thing. They had nearly a year to pull us in for a conversation if they felt like they had concerns, but they chose not to.

“My daughter is eight and we as her parents are the ones right now who need to make sure she is treated with respect and fairness, not treated differently because of her struggles. Never once has anybody reached out to apologise for how our daughter was dismissed and treated.”

The riding school has said that it offered to teach Eva in a private lesson as it only has Eva’s best interests at heart. The spokesman said: “Moreover, rather than taking someone’s money for their child to get increasingly distressed during lessons we suggested that she begins to rebuild her enjoyment of being around ponies again by coming to groom them and spend time at the yard without the stress of riding. There was never any intention to charge the customer for this, we just wanted to find a way to continue to engage the family with Eva’s best interests at heart.

“As the yard’s owner and senior instructor, I also offered to personally take over teaching Eva on a Saturday and asked the dad to ring to arrange this. However, the customer has chosen not to take up this offer. We are aware that videos have been circulated showing Eva enjoying her riding which is lovely to see. However, there is also CCTV at the yard and we have clear recent footage that evidences this hadn’t been the case and shows clear signs of her distress.

“We teach many children each week and strive to provide a safe and friendly environment for each participant to enjoy their lessons, with whatever support they need, so it’s very disappointing that despite our best intentions for Eva her parents felt the need to take this course of action. Our business has been established for over 17 years and we have prided ourselves on providing excellent customer service and have never had a bad review until now. We have customers who have had lessons with us as children and who have continued to attend them with us now as adults.”

The stables added: “Eva’s family have recently posted some poor reviews on the Meadow View Stable’s Facebook page, which we believe are very unfair, but if you were to look at other reviews they are all very positive. We are also a fully licensed yard and have five stars with both the council and the vets.

“We wish Eva and her family well and hope that in the future Eva will get the help she needs. We’re sorry that the family felt that we hadn’t been able to offer the necessary support.”