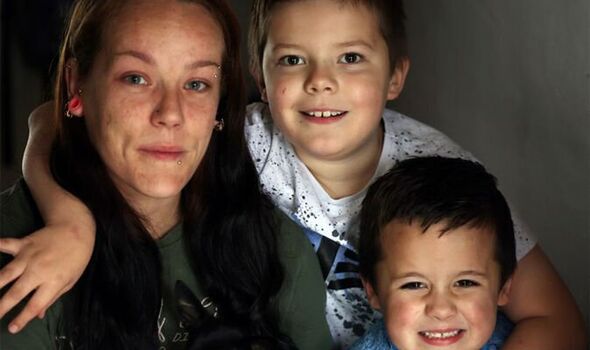 A mum has revealed her desperation as she struggles to try and keep her home warm, whilst feeding her two children during the cost of living crisis. Simone Walton, 30, lives in the Walker area of Newcastle with her sons Enrico, nine, and Kendrick, four.

The single mum is in arrears with her bills and is surviving on one meal a day to ensure that there is food on the table for her children, reports the Chronicle Live. She has resorted to using food banks twice a month and, when they are not at school, she takes her sons out to free indoor events to avoid them using the electricity and gas at home.

Simone, who is trying to get a part-time job, receives around £900 a month in income support, child benefit, child tax credit and disability living allowance, which she receives for her eldest son. She said she currently has a £1,379.49 gas and electricity bill to pay as she was provided faulty meters which she has been unable to use.

She said she is also struggling to cover her other monthly bills which include council tax, water, TV licence, internet, two mobile phone contracts for her and Enrico, food, Netflix and bus travel.

Simone said the increase in the cost of food in the supermarkets has made it difficult for her to manage without the help of a food bank. She said: “Before I was barely able to afford the shopping, now I am going to the food bank at least twice a month.

“One of my sons has additional needs so he will only eat certain things. He will only eat plain pasta or a plain ham sandwich. The price of a pack of ham is up to nearly £2 now, it’s ridiculous. He hasn’t had his turkey dinosaurs for a while – they are too expensive.

“I’m missing meals to make sure they eat, I have one meal at night time. The other day I was in pain through hunger and my little boy was trying to give me his baguette. Even if he offered, I couldn’t take it. I drink pop and water throughout the day, as long as I have my fluids I am ok. Then between 5pm and 6pm we sit down and have a meal together.”

With a huge energy bill already hanging over her head, Simone admits she rarely turns the gas on. She said that she is stressed about money, how she is going to heat her home this winter and the health of her children.

She said: “I can’t afford to heat my house up. I can’t remember the last time I had my heating on. I’ve been scared to have it on for even an hour. Now winter is coming, I do feel the cold now in the morning. The boys have thermal pyjamas with dressing gowns on top and we sit on the sofas with blankets. We have about seven or eight blankets to keep us nice and snug.

“I’m pretty much a month in arrears on everything at the moment. My phone company has let me pay my bill a month after.”

Simone said she purchases clothing for her children from second-hand shops. When it came to purchasing their school uniform, she said she got them school trousers from Primark, their school t-shirts from Poundland and she has bought their jumpers, of which they have two each, from their school: “I mainly go to second-hand shops for their clothes. They don’t really care about style and fashion. My son’s trainers are a size four and he’s a size two but that’s all I could get a hold of at the time.”

Simone said that if an item breaks in their home she has to sell something else, which they do not use as much, to replace it. She said that Enrico’s mobile phone, which he got as a present last year, is now broken and she is still paying for his £12 a month contract.

She said: “It’s a struggle as both of their birthdays are coming up in November and then there is Christmas after that. Now it’s all about electronics. It seems to be a competition of who has the best. My eldest says ‘I wish we were rich so we could have that.’ I tell him he’s got to be good at school and get a good job.”

Simone said they have never been on holiday as a family and that she tries her best to get her boys a Mcdonald’s at least once a month as a treat.

She said: “They keep asking to go to Mcdonald’s all the time. I used to take them once a week on a Saturday but now it’s got to the point where it’s once every couple of weeks, maybe once a month. It depends on how much money we have got and if we can.

“We have never been on holiday, we don’t have passports, I wouldn’t even know where to start.”

Simone said she is desperately trying to find a part-time job so she can improve their quality of life. She has been visiting free events to get help and advice. She has created a CV and is now learning how to write a cover letter.

She said: “Before I had my first son I was doing agency work such as waitressing. When he turned five, I fell pregnant with my youngest. He’s four now and I know that in a couple of months I need to start getting a job. I have been speaking to Building Futures East about writing cover letters and getting back out to work. I try to find things we can go to indoors as it keeps them warm. It gets them out of the house so they are not fighting and they are not using electricity. The kids are getting tired out and they are getting fed with free snacks, which is always a bonus.”

Simone said the financial struggle has affected her mental health. She said that getting her one-year-old Chihuahua Lexi has helped her massively. She said: “Getting her is the best thing I have done. She’s not expensive to feed and taking her out for walks in the fresh air really helps. Whenever I get stressed as a single parent I grab the dog and she sorts me out. She has made me a lot calmer.”

Simone has urged other people who may be in a similar position to attend local events and seek help from services. She added: “Speak up if you need help, whether it’s with your mental health or financially. Speak to somebody and go to the food bank if you need to, don’t be ashamed.”