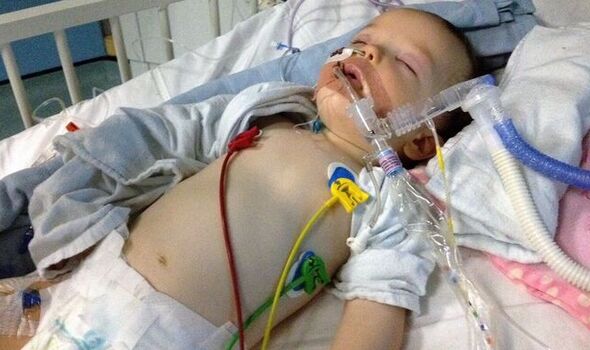 When 10-month-old Annabelle started coughing and wheezing, Kent mother Kate Skelton thought she had another bad cold – but as her breathing became more laboured and doctors refused to admit her to hospital, she became increasingly worried. With the UK seeing an increase in hospitalisations due to respiratory syncytial virus (RSV) in under-5s, Mrs Skelton’s message to other parents is to be aware of the symptoms and trust their instincts.

The first sign something was wrong was how hard it was for Annabelle to breathe, Mrs Skelton said. Her chest was contracting, she was breathing fast, and getting more and more lethargic. She said: “My gut was just screaming – this is not right.”

Speaking about when she was sent home from the hospital, she told Express.co.uk: “My husband and I were so alarmed by the speed of her breathing that we sat up with her all night, counting her heart rate.”

But it was not until their third trip to A&E that Annabelle was admitted. By that point she was rapidly deteriorating. Mrs Skelton said: “It was literally in a second. In the blink of an eye, it was so fast.”

Annabelle was put on a ventilator and transferred in an ambulance to intensive care at King’s College Hospital in London.

Mrs Skelton said: “Watching her fight for her life, her tiny body covered in wires and being unable to hold her or touch her was terrifying.

“There were so, so many wires – in her mouth, her nose, her hands, her legs, her fingers, her toes. She also had a canular and a catheter.”

The doctors said Annabelle had bronchiolitis, a chest infection most commonly caused by the respiratory syncytial virus (RSV) that causes a cough with a lot of mucus, making it a struggle to breathe. Mrs Skelton said: “I’d never heard of the condition, even though it is something eight out of 10 children will have had by their second birthday.”

When Annabelle was taken off the ventilator after a week, she had no voice. “She was crying, but it was a silent cry … She was really, really sobbing, but with no noise and it was just really gut wrenching.

“It just was so awful. And I felt like she had sort of gone into hospital this happy baby and just come out completely different.”

Annabelle is now 7, and has been in hospital almost every winter. Mrs Skelton said she worries every year as cold and flu season approaches.

“It’s all about knowing those signs, because if you don’t know what you’re looking out for, you can’t spot it.”

Parents are experts in their children and know what’s normal for them, she said, encouraging parents to “keep pushing” if they think something is wrong.

“I just thought she had a cold, I had no idea she was going to end up fighting for her life in intensive care.”

Erika Radford, head of health advice at Asthma + Lung UK, said most of the time RSV symptoms are very mild and can be managed at home.

She said: “Like most other colds and viruses, RSV starts with a blocked or runny nose and can progress to cause a cough, fever and sometimes breathing difficulties.

“However, some children do develop more severe symptoms. RSV can sometimes lead to bronchiolitis, an infection of the smaller airways in the lungs.

“Warning signs to look out for in your children include if they are finding it difficult to feed or eat, they are breathing more quickly, they have noisy breathing (wheezing) or seem very tired.

She advised any parents who were worried about their child having RSV or bronchiolitis to speak to their doctor, 111 or call the Asthma + Lung UK helpline on 0300 222 5800.