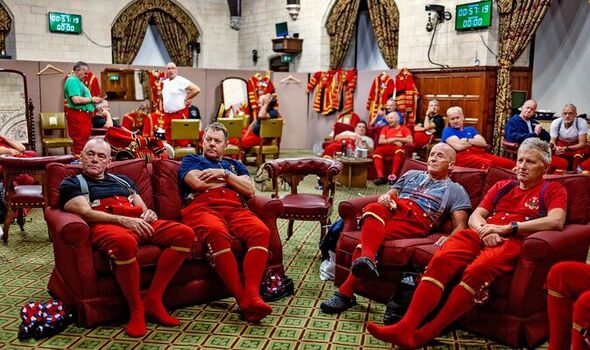 Members of the oldest unit of royal bodyguards were pictured taking a well-earned rest from their final duty for their monarch. Their ceremonial red and gold Tudor uniforms hung within easy reach, ready for their next stint in front of the seemingly endless lines of mourners pouring into Westminster Hall.

Thousands of people last night continued to join the queue to pay their respects to Her Majesty.

During the day the Government urged people not to make the journey to “avoid disappointment”.

But many did, desperate to experience the lying in state in its final few hours before today’s service in Westminster Abbey.

Many took supplies, expecting to wait for at least 13 hours. Officials kept the line open as the estimated time to reach the Hall fell to around 10 hours later in the day.

Mourners were anxious to ensure that they were among the final few allowed in.

Babies in buggies, pensioners and entire families joined the river of people flowing through London – some for the second time. Volunteer helpers kept spirits up by high-fiving queuers.

Reuben Gold arrived at Southwark Park in his Scout uniform with his mum Georgina at 3.30pm.

To pass the time he practised his Scout salute for when he sees the coffin.

The nine-year-old, from Islington, north London, said that he wanted to say goodbye on behalf of his grandma – a huge fan of the late monarch who had met her in 1961 during a royal visit to Ghana.

Previously known as Christiana, she loved the Queen so much she changed her name to Elizabeth. She was unable to join the queue but Reuben took along snacks and jumpers for him and his mum.

He said: “The Queen was a patron of the Scouts and now the King is. So I wanted to say thank you and goodbye myself.

“I’ve been in the Scouts for three years now, since I was six, so today is a really important day for me. It’s my job now to pay my respects.”

Georgina said: “We are doing this for Reuben’s nan who loved the Queen so much. In 1961, she met the Queen when she got off the plane and she always talks about that moment, so we are here for her too.” Shan Parker had boarded a 7.30am bus from Bridgend, South Wales, with stepdaughters Christine Parker and Jane Watson after a night shift in their cleaning business.

The trio were sleep-deprived but still prepared to queue overnight to see the Queen’s coffin.

Mrs Parker, 60, said: “She has been the pillar of the entire Commonwealth. She is someone to look up to. I just love the Queen and it broke my heart when she died. The queue has been fantastic so far. We are ready to go overnight – anything for Her Majesty.

“We want to pay our respects and wish King Charles well.” 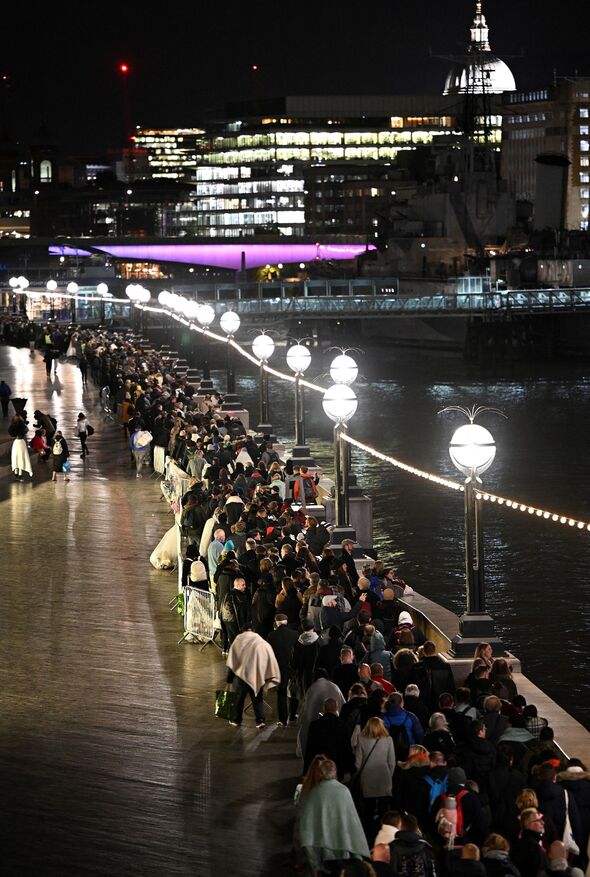 Mrs Parker added: “We have water, sandwiches and we’re going to see the Queen. That’s all that matters.

The three women hoped to see the start of the funeral before catching a bus home so that they can return to work. Despite the long wait times and cold conditions, some people hoped to get the chance to file by the coffin a second time.

Emily and her two daughters were giving the queue a second attempt after having to abandon the first time.

She said she had had to step away from the line as daughter Elizabeth, six, “had a meltdown”.

The Portsmouth mother added: “Elizabeth coerced me last night to come back and try again in the daytime. I couldn’t say No.

“We’re prepared this time. More snacks in the buggy and more clothes just in case. My partner thinks I’m mad. He’s not happy.”

Shiv Pandian, 58, of Raynes Park, south-west London, said that his 30 years working for the NHS had prepared him for a long wait: “There’s lots of places to eat and toilets and things.

The urologist added: “I got out at Waterloo and followed the queue.

“At one point I was guided here to Southwark Park. Then [a notice] said reassuringly, ‘It’s 14 hours from the entrance here’. So I’m hoping by midnight I’ll have seen the Queen.” Lance

Corporal Chris Hurst, 35, had queued up to pay his respects with his Army service his chest.

“She was the boss. If you fight for her, you want to pay your respects. She dedicated her life to the country.”

The Army veteran added: “Us doing this is a way of showing our duty.”