Callum Fitzpatrick won £390,000 when he was 16-years-old, making him one of Northern Ireland’s youngest ever winners. Friends and well wishers have said they are “deeply shocked and saddened” by Mr Fitzpatrick’s sudden passing just a few years after his big win.

A spokesperson for the club shared the update on Facebook, alongside a heartfelt message about how devastated the community is.

The post, shared on Wednesday, said: “The Executive Committee, members, and the Ballymartin Senior men’s team are deeply shocked and saddened by the tragic sudden passing of our friend and teammate Callum Fitzpatrick.

“The entire community of Ballymartin and surrounding area of Mourne is heartbroken. 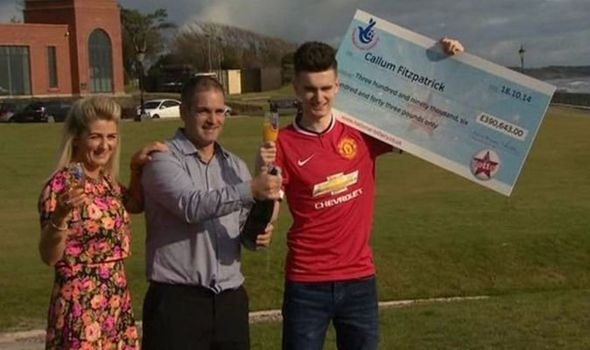 “We offer our sincere condolences to his father Colin, mother Sheila, sisters Tierna, Corragh and Meagh and wider family circle, a lot of whom are deeply rooted in our club at all levels.

“As a mark of respect there will be no onfield activity at the club grounds until further notice.

“Callum will be sorely missed by everyone involved with Ballymartin GAC. A wonderful, intelligent young man, a great friend and teammate, tragically has left this life too soon.”

Mourners have been sharing their heartbreak over the news in the comments of the post.

One said: “Rest in peace Callum- always a gentleman! Thoughts and prayers are with you all. Cherish the beautiful memories you made together.”

A second added: “Cant get this wee fella out of my head. Sincere condolences to the whole family circle. RIP Callum.”

Another said: “Sending Deepest Sympathy to the Entire Family circle thinking about you all at this very sad time.”

Mr Fitzpatrick had been working at his parent’s grocery shop when he won the cash prize in 2014.

He spent some of his winnings on a new car, as well as a visit to Old Trafford given that he was a huge Manchester United fan.

Mr Fitzpatrick was babysitting at his Aunt Geraldine’s house in Bryansford when he realised that he had the winning numbers.

The funeral took place in Massforth on June 4.