In an Instagram post, the Russian opposition leader says he is well and has not been subject to violence, but described a dystopian existence in the prison camp where he will likely spend the next two years. 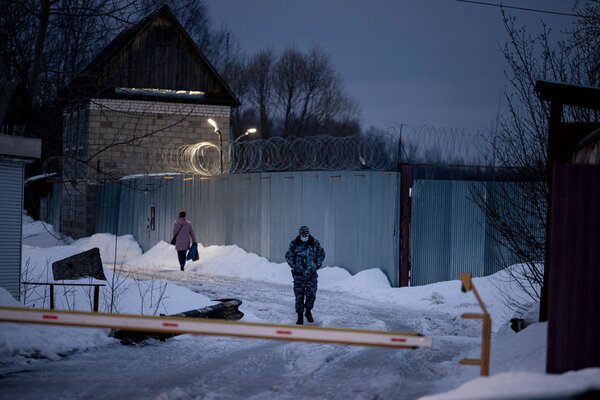 MOSCOW — The Russian opposition leader Aleksei A. Navalny greeted his supporters via Instagram on Monday from the prison where he is likely to spend the next two years, referring to his new confines as “our friendly concentration camp.”

Mr. Navalny, whose whereabouts had been unknown for days, said in a message posted on his Instagram page that he had been transferred to Penal Colony No. 2 in the Vladimir Region east of Moscow. Mr. Navalny had passed the message along to his lawyers, who were able to visit him at the penal colony earlier in the day for the first time.

It was the prison, known for harsh conditions even by Russian standards, where Russian media reported Mr. Navalny had been sent two weeks ago. But it later emerged that Mr. Navalny was dispatched from the Moscow jail where he had been held since January to a different detention center first.

“I must admit that Russia’s prison system managed to surprise me,” Mr. Navalny said in the Instagram post. “I did not imagine that it was possible to set up a real concentration camp 100 kilometers from Moscow.”

Mr. Navalny, the most prominent political opponent of President Vladimir V. Putin, returned to Russia in January after having recovered from a near-deadly poisoning in Siberia last year. He was arrested at passport control, then sentenced to two-and-a-half years in prison for violating parole on a suspended sentence he had received in 2014.

The sentence was widely seen as an attempt by Mr. Putin to silence his loudest domestic critic. The initial wave of nationwide protests prompted by Mr. Navalny’s arrest has now passed, but his political machine remains potent and is preparing to challenge Mr. Putin’s ruling party in the parliamentary elections scheduled to take place in September.

Mr. Navalny appears determined to keep encouraging his supporters from prison via his Instagram account, where he has more than four million followers. He wrote in Monday’s post, which was paired with an old photo, that he had seen “not even a hint” of violence at his new penitentiary home, but that his fellow prisoners appeared to be terrorized by beatings widely reported to have been carried out at Penal Colony No. 2 in the past.

“The methods have now changed and, I’ll be honest, I can’t even remember a place where everyone speaks so politely and, in a way, welcomingly,” Mr. Navalny wrote. “Video cameras are everywhere, everyone is being watched, and a report is written up in response to the slightest violation.”

Even profanity was prohibited, Mr. Navalny wrote. Shockingly for a Russian prison, “this ban is strictly followed.”

The prison, referred to by its Russian initials IK2, has long been known for strict enforcement of rules. Lawyers and former inmates have described a separate, harsher punishment facility within its walls where inmates are not allowed to mingle or even talk among themselves.

The site is typical for Russia’s colony-type prisons that evolved, with a few improvements, from the gulag camps established in the 1930s. Inmates live collectively in groups of several dozen called brigades in low-slung, two-story buildings surrounded by walls and barbed wire.

Discipline is enforced by prisoners in cahoots with the warden, according to former inmates, an arrangement that will allow the prison administration to strictly control Mr. Navalny’s life at all times. Prisoners spend hours standing with their hands clasped behind their backs, looking at their feet, forbidden from making eye contact with the guards, one former inmate, the nationalist politician Dmitri Dyomushkin, told a Moscow radio station recently.

Mr. Navalny, in Monday’s post, said he remained classified as a flight risk, meaning that he was woken up every hour at night by a guard with a camera reporting on his condition.

The constant surveillance, Mr. Navalny wrote, reminded him of a dystopian novel: “I think that someone up high read Orwell’s ‘1984’ and said, ‘Oh, awesome. Let’s do that. Education through dehumanization.’”

But as he has done repeatedly in recent months, Mr. Navalny still sought to radiate optimism. He has used his imprisonment to try to show Russians that they need not fear Mr. Putin, as long as they believe that, sooner or later, their side will prevail.

“If you deal with everything with a sense of humor, you can live with it,” Mr. Navalny wrote. “So, all in all, all is well here.”