A man who tried to ‘massacre’ his neighbours laughed as he was arrested moments after stabbing one to death, telling police officers: ‘I warned them I was going to murder him.’

Can Arslan, 52, attacked father-of-three Matthew Boorman as he arrived home from work, knifing him 27 times in Walton Cardiff, near Tewkesbury, Gloucestershire, on October 5 last year.

Arslan had subjected Mr Boorman, 43, and other residents of the new-build development, to years of threats and abuse, and had been charged with harassment just a week before the killing.

Jurors at Arslan’s murder trial at Bristol Crown Court saw a compilation of video clips taken on the day of Mr Boorman’s killing.

Some have been released by Gloucestershire Police after it was played in court, including footage taken from the body-worn cameras of the officers who arrested him.

Arslan, who is lying on the road with his hands cuffed around his back, is heard swearing at police and saying: ‘You’re next mother******, you’re next.’

‘I was special forces, I warned them I was going to murder him, ha, ha, ha.’ 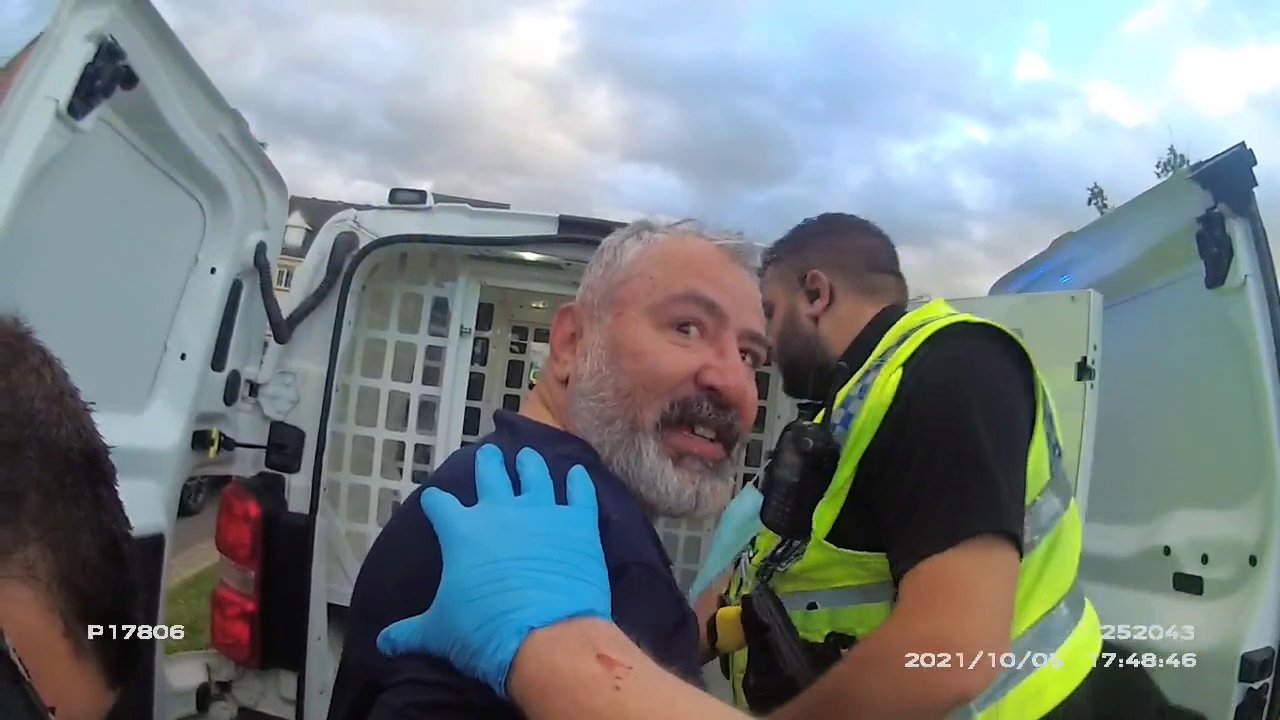 As he is placed in a police van, Arslan says: ‘I told the police one year because he was against my son, my wife, ha, ha, ha.’

He then says there is a bounty on the police officers and calls them ‘mother*******’.

Earlier, jurors were told Mr Boorman had spoken of feeling ‘very scared’ of what Arslan might do and did not ‘know what he’s capable of’.

Mr Boorman had made his statement on May 13 last year and he said he had lived next door to Arslan since 2013, with his neighbour calling him ‘Hitler’ and ‘cocksucker’.

He detailed the contents of a 30-minute telephone conversation he had heard Arslan making the previous evening.

‘I could hear Mr Arslan speaking in his garden in a raised voice and could make out he was making reference to being arrested last Tuesday,’ Mr Boorman said.

‘I believe Mr Arslan was on the phone to someone – or pretending to be – and immediately caused me to be frustrated as this is what Mr Arslan has been doing for the last two years, and also why he’s currently on police bail conditions not to have any direct or indirect contact with my household.

‘I remember certain things which were said on these phone calls. Mr Arslan was speaking in such a loud voice that I could clearly hear what he was saying.

‘Some of the comments are: i) he likes being arrested, ii) he is unhinged, iii) he misses prison food, iv) God forgives but I will not forget.

‘He referred to an incident in 2009 when he assaulted someone after a road rage incident and put them in intensive care. If he would have killed that guy he would be out by now.

‘He talks about hoping he would go to prison and would get out early because he is unhinged.’

Mr Boorman said Arslan also referred to ‘Hitler’, which he assumed was a reference to him.

He went on: ‘Due to ongoing issues, hearing this from Mr Arslan caused me to feel very intimidated and concerned for the safety of myself and my family.

‘He was in his back garden whilst on the phone saying these things.

‘I believe he was well aware I may be hearing his conversations and the aim of doing this was to cause myself to feel alarmed and distressed, as well as to continually harass my family.

‘I am very alarmed he made references in his conversations about missing prison and wanting to be arrested.

‘I genuinely fear his conversation was meant to be overheard by us, to let us know that he isn’t scared of the police, is willing to go to prison, and when he is released, he won’t forget about the incident.

‘I also believe he’s trying to intimidate us into not making complaints to police. I am very scared of what Mr Arslan can do.

‘He makes reference to being ex-special forces and has made threats previously of rape. This week he has taken images of my daughters’ bedrooms.

‘I don’t know what he’s capable of and this causes myself and my wife to be continually anxious regarding the nature of Mr Arslan.’

Mr Boorman, who worked for engineering firm GE Aviation, had just returned from work when Arslan stabbed him.

His wife, Sarah, witnessed the entire attack and tried to pull Arslan off her husband, suffering a deep wound to her thigh as a result.

After the killing, Arslan forced his way into the home of Peter Marsden and stabbed him eight times, although Mr Marsden eventually managed to wrestle him out of the property.

The day before the attack, a police officer had telephoned Arslan about the complaint he had made.

He informed the officer he would sort his neighbour out himself, adding he would “murder him”, the jury heard.

Arslan has admitted the attempted murder of Mr Marsden, causing grievous bodily harm to Mrs Boorman, and a charge of affray, but denies murder, claiming he was in the grip of a psychiatric disorder.