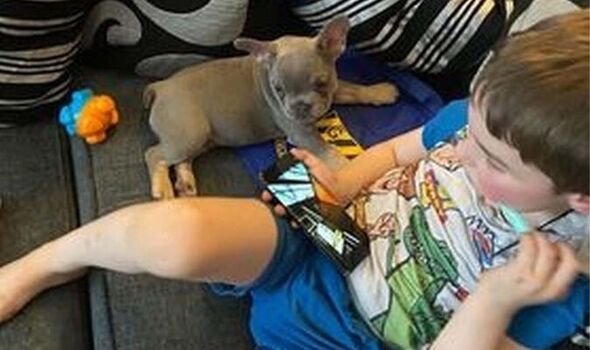 Mum of two, Karen Higgins, claims that she knew something was wrong when her 15-month old French Bulldog, Vitani, started ‘aggressively’ barking in the kitchen after she left her and their new 12-week-old puppy, Stitch, in their beds. The 30-year-old then heard dishes crashing and a candle she got for mothers day smash on the window ledge at around 10pm on Thursday, May 19.

According to the Liverpool Echo, Karen ran straight to the back room of her home on Wilburn Street, Walton, and saw her fence was wide open. She then ran into the street shouting “somebody is in my house” and called the police.

Karen said: “I had just locked up and put the dogs in the kitchen before heading upstairs to bed to watch the soaps. I heard this sound of dishes crashing and a big smash, which was a candle my eldest got me for mother’s day.

“I ran straight to the window and saw the back fence open. I would never do that because it’s always bolted for the dogs.

“I ran into the street because I was too scared to go into the kitchen, I was screaming ‘somebody is in my house’ but nobody was listening. In the end, somebody came over and went into the kitchen for me and said my dog (Stitch) was gone and the window was forced open.”

Karen claims one of her neighbours, Jonathan Anthony Waters, came out into the street and started asking what had happened. After she told him her dog was stolen, she claims he said “that’s heavy that,” before pointing her in the direction of other people on the street who “might be able to help”.

Hours later police arrested the neighbour on suspicion of burglary after Stitch’s collar was found in his home. Waters, of Wilburn Street, Walton, appeared in Liverpool Magistrates Court on Saturday, May 21, where he pleaded guilty to the offence. Waters was conditionally bailed ahead of sentencing on July 5.

Karen said Waters saw the puppy in the street for the first time the morning of the burglary. She told the Echo: “Stitch was just playing in the street and he came over and said “oh he’s boss isn’t he” and was asking questions about him. I couldn’t believe it.”

Karen had only bought the dog a month earlier for her five-year-old son Tyler, who has autism and struggles with communicating with people. Since coming into their home Karen said Stitch was “stuck to Tyler like glue”.

She said: “Since he came into the house (Stitch) he’s made a bond with this boy, they’re inseparable. I can’t even describe this bond. He was staying at his dad’s and every time I FaceTime him he says ‘where’s the baby’, that’s what he calls Stitch.”

Stitch was reunited with the Higgins family on Friday, May 20.