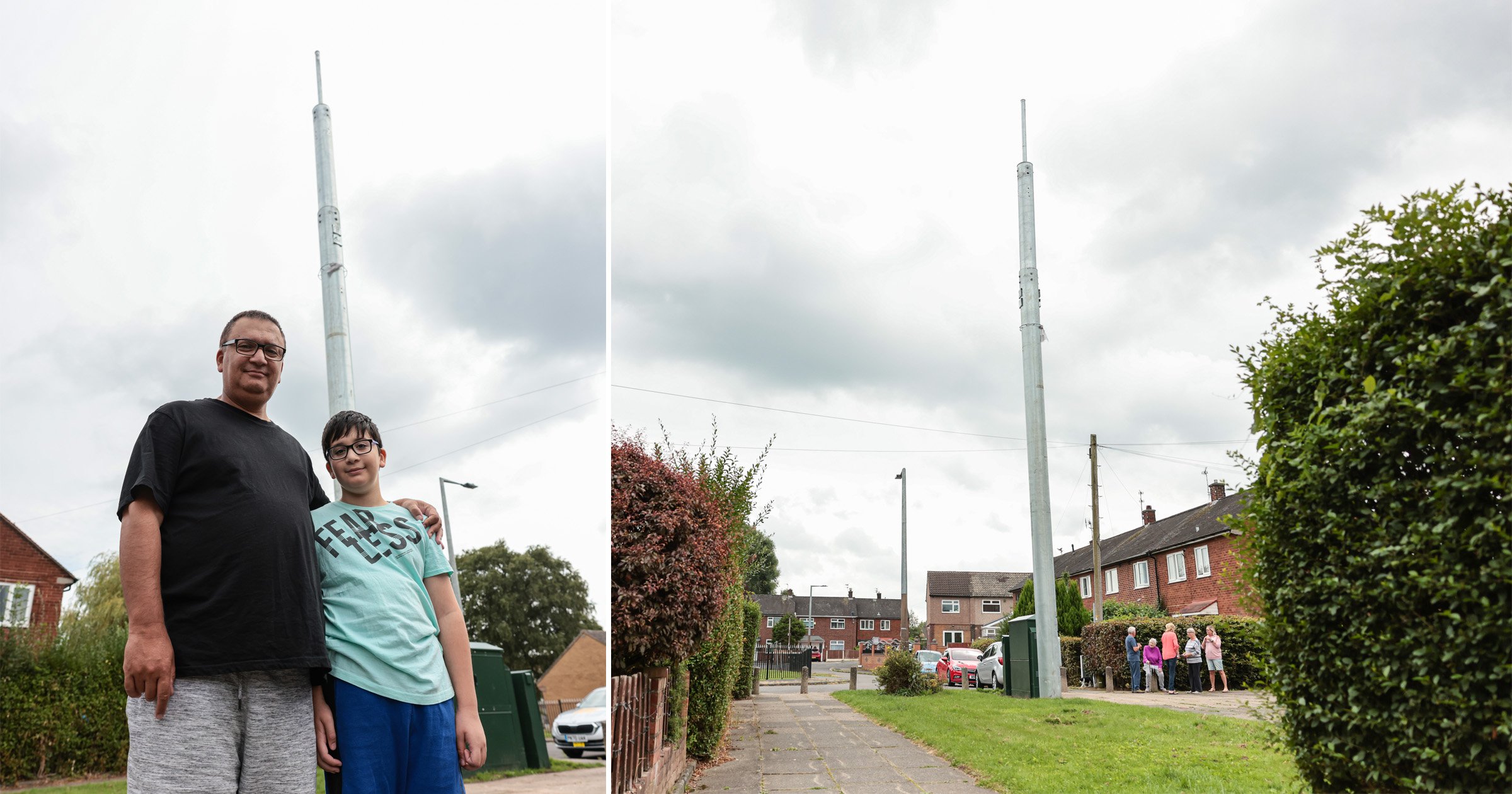 Furious neighbours have been left scratching their heads after a huge 6G mast was installed in their street without notice.

A ‘monstrous’ towering 15-metre metal structure quietly appeared in Lymm Walk, Cheadle, in Greater Manchester, much to the confusion of its residents.

‘I was away for a couple of days and came back – and as soon as I turned the corner I saw it,’ he said.

‘It’s an eyesore, you can see it from my living room window as well.’

Many of the residents in the street – which is just off Tarvin Road – have claimed they were not consulted prior to the erection of the post.

Ryan’s neighbour, 78-year-old Derek Atkin, called the mast ‘an eyesore’ and said people were not given ‘proper notice’ about it.

Derek’s wife Veronica, 70, said an A4-sized notice on a nearby lamppost announcing the arrival of ‘ultra-fast gigabyte-capable broadband’ was not good enough.

‘We didn’t have the option, they just said they were going up, we should have had a letter individually, or at least come to the door,’ she said.

6G is the sixth generation of wireless mobile technology, and is not expected to become a solid standard in the UK until around 2025.

It could offer peak data rates 50 times faster than 5G, which is still currently being rolled out across the world.

Have you been affected by one of these masts being installed near your home? Please get in touch at webne[email protected]

The company, based in Blackburn, says it is ‘managing the 6G internet in towns in the north of England, providing gigabit internet at lower prices than providers such as Virgin and BT’.

IX Wireless has been contacted by Metro.co.uk for further comment.

Tech expert Jeff Brown told the Legacy Research Group: ‘6G will be safe, just like 5G. It’s important to remember that wireless technology like 5G is already safe. It emits non-ionizing radiation. This kind of radiation is all around us.

‘And there has been no conclusive evidence that 5G non-ionising radiation is harmful.’

Any technology is extensively tested before being rolled out and scientists continue to monitor it for long-term impacts on human health.

‘But the radiation that mobile phones or phone masts transmit and receive is very weak.

‘It does not have enough energy to damage DNA so is highly unlikely to be able to cause cancer.’

‘We work hard all our lives to pay for our own house and get a really nice view outside.

‘Then you get to your retirement, you have time on your hands, and you have got this.

‘I don’t think they would put it on a private property, it’s because this is a council estate.’

Several residents – including taxi driver and dad Abdul Khan, 41 – have expressed health concerns regarding the installation of the 6G pole.

A letter from Stockport Council seen by the MEN reads: ‘The council is aware of the recent installation of a metal mast on Malpas Close, which is understood to be 15 metres in height.

‘For the avoidance of doubt this installation has not been assessed under this notification and the mast has been installed without prior notification to the council as the local planning authority.

‘You have been asked to provide clarification as to precisely what the purpose of this structure is, as well as plans and details, and we request this within the next seven working days.’

The council has also been contacted for further comment by Metro.co.uk.