The Organization for the Prohibition of Chemical Weapons confirmed on Tuesday that the substance used to poison the Russian opposition leader Aleksei A. Navalny had “similar structural characteristics” to the Novichok family of highly potent nerve agents.

The finding from the world’s leading chemical weapons body adds additional weight to the conclusions of laboratories in Germany, France and Sweden, and increases the likelihood that Russia, which has been accused of using a similar poison in at least one previous assassination attempt, will be punished, likely with targeted financial sanctions.

“These results constitute a matter of grave concern,” the organization said in a statement. “The use of chemical weapons by anyone under any circumstances,” it said, is “reprehensible and wholly contrary to the legal norms established by the international community.”

Mr. Navalny, the most prominent figure in Russia’s political opposition, fell ill on a flight from Siberia on Aug. 20 and slipped into a coma. The Russian authorities initially prevented his family from transporting him abroad for treatment, but he was eventually brought to Berlin, where he was treated at the Charité hospital. He was discharged on Sept. 23 and has vowed to return to Russia to continue his work after a period of rehabilitation in Germany.

The German authorities said they never doubted the conclusions of military scientists in Germany, who had reported discovering traces of Novichok in biological samples taken from Mr. Navalny, as well as on a plastic water bottle from his hotel that was smuggled out of Russia by his aides.

But the findings of the Organization for the Prohibition of Chemical Weapons add an authoritative and independent assessment that the Germans could use as ammunition in the pursuit of punishment, most likely in the form of financial sanctions against Russian officials.

By doing so, Germany would be following a playbook used in 2018, when the British government relied on the chemical weapons body to bolster its conclusions that Russian operatives had used a Novichok poison in an attempt to murder Sergei V. Skripal, a former Russian military intelligence officer who had spied for Britain. In that case, the organization’s findings helped assure Britain’s allies and justify a mass expulsion of Russian officials in the weeks after the poisoning.

Steffen Seibert, the spokesman for the German government, said in a statement Tuesday that “in the coming days” the countries of the European Union together with the Organization for the Prohibition of Chemical Weapons would discuss “next steps.”

“The German government renews its call on Russia to explain what has happened,” Mr. Seibert said. “Any use of chemical weapons is a serious process and cannot be without consequences.”

The Organization for the Prohibition of Chemical Weapons was awarded the Nobel Peace Prize in 2013 for its efforts to whittle away the world’s stocks of chemical weapons, but its record as the world’s watchdog for such weapons has become clouded in recent years.

In 2017, an official from the organization traveled to Moscow to certify that Russia had fulfilled its obligations as part of the Chemical Weapons Convention and destroyed its remaining declared stocks of chemical weapons.

Less than six months later, a pair of Russian operatives traveled to Britain, armed with a Novichok-class chemical weapon that had apparently been produced secretly, under the noses of weapons inspectors, according to the British government. The operatives used it to poison Mr. Skripal and his daughter, Yulia Skripal in Salisbury, in southern England. Three other people in Salisbury were also poisoned, and one of them, Dawn Sturgess, died.

Two years after that, it was used on Mr. Navalny.

Russian officials have denied involvement in both attacks. On Sept. 15, the head of Russia’s foreign intelligence service, Sergei Naryshkin, gave a rare news conference in which he said that all stocks of Novichok had been destroyed in accordance with the Chemical Weapons Convention.

“To say that on the territory of Russia there is production or stocks of military-grade poisons is of course disinformation,” Mr. Naryshkin said. 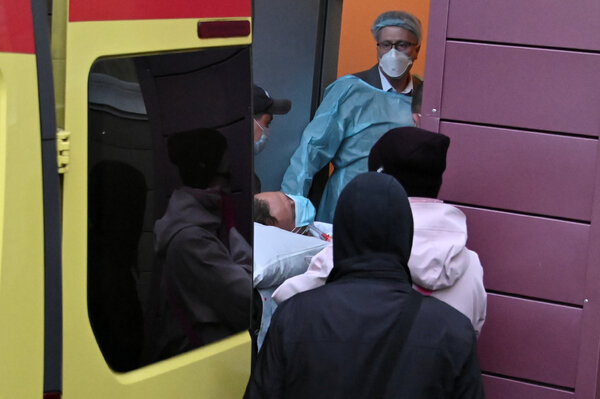 Western intelligence services say otherwise, though Mr. Naryshkin’s comment, even if inaccurate, was revealing — a rare acknowledgment that Russia had, at least at one time, possessed stocks of Novichok. The nerve agent was developed in the Soviet Union and Russia in the 1980s and ’90s and was so highly classified that before the Skripal attack it was not even listed as a banned substance under the Chemical Weapons Convention.

Before Mr. Naryshkin’s comment, Russian officials had denied that the Novichok program existed, though some of the Russian scientists involved in it had spoken about it publicly.

Despite Russian denials, a small group of Western countries have known about the Kremlin’s Novichok program for decades, including where the substance is produced and stored, said Andrew Weber, a senior fellow at the Council on Strategic Risks.

Western officials pressed their Russian counterparts on several occasions to cease production of the weapons, though for years the West resisted including the Novichok class on the Chemical Weapons Convention list of banned substances, Mr. Weber said.

The weapons were considered so dangerous that publicly acknowledging them was judged a proliferation risk, said Mr. Weber, who was an assistant secretary of defense for nuclear, biological and chemical weapons programs during the Obama administration.

Russia never possessed large stockpiles of Novichok, but was able to produce small amounts on demand, he said. Even low quantities, he added, would be sufficient to kill thousands of people.

It was only after the Salisbury poisonings that Western officials accused the Russians publicly and successfully pushed to have three forms of Novichok nerve agent added to the list of banned substances, though not all of them.

The nerve agent used on Mr. Navalny, according to the German authorities, is a novel form of Novichok that until now was unknown to Western experts.

In an interview posted Monday on a popular Russian YouTube channel, Mr. Navalny struggled to explain what it felt like to be poisoned with Novichok, saying it was like nothing he had ever experienced.

“Normally when you’re not feeling well, you can assess yourself and figure out what’s happening — my heart hurts, my stomach hurts, my leg hurts, or I’ve got a cold,” he told the interviewer, Yuri Dud. “But in this case you can’t understand it.”

He said it was something like being kissed by a dementor, the ghoulish soul-sucking monsters from the Harry Potter series.