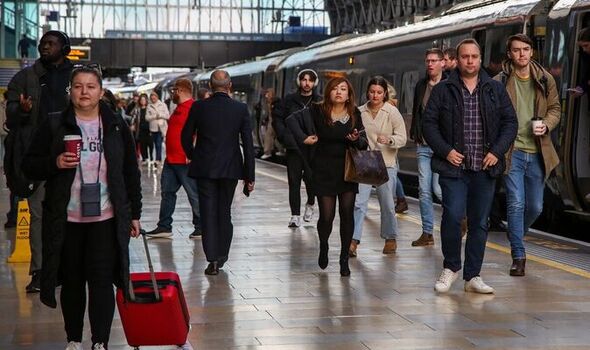 The day-long strikes are expected to launch weeks of mayhem as unions led by the RMT demand higher wages. Event organisers have advised ­spectators to plan their travel around stoppages which threaten to derail their time-off plans.

But RMT leader Mick Lynch has warned that the dispute could last into next year – and other unions are also squaring up to their bosses.

Andrew Haines, chief executive of Network Rail, which owns stations and tracks, said: “We will again have to ask passengers to only travel if ­absolutely necessary.”

RMT’s national railway union members will strike on Saturday, Monday and Wednesday, while Tube and London overground members go out on Thursday.

Industry experts say disruption to services will inevitably spill over from each strike day to the next morning. Network Rail warned on strike days only one in five trains will run across its network and only between 7.30am and 6.30pm.

During the London stoppages on Thursday, management believe there will no trains, or a ­limited service on the Tube and a reduced schedule on the overground.

And the Transport Salaried Staffs Association has called its members in West Midlands Trains out next Friday in a dispute over pay, job ­security and conditions.

Nadine Rae, organising director, said: “Our members are seeing the real value of their wages plummet in this Tory cost-of-living crisis. This ­cannot be allowed to continue.”

This week, new Transport Secretary Mark Harper said he would be “very happy to meet the trade unions” – in a shift from predecessor but one Grant Shapps. Mr Harper said: “The negotiations are going to take place between the unions and the employers: Network Rail and the train operating companies. But I think it’s helpful for ministers to meet trade union leaders and to ­listen to their concerns. I’m very happy to do that.”