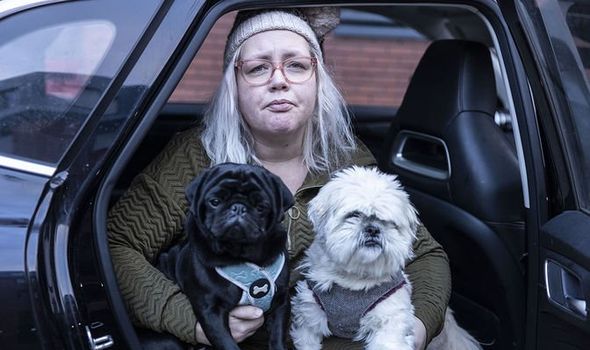 Nikki Campbell, 42, spent Christmas Day “crying” and walking her two dogs Junior and Daisy before sleeping in a car she borrowed from her nephew. She had been renting a house in Wavertree, Liverpool, but had to leave when her landlord wanted to sell up.

She said she’s had to “battle” two different councils to request accommodation and, as nothing has been found, she’s settled in the car with her pug and Shih Tzu.

Nikki, a theatre recovery nurse at Royal Liverpool Hospital, was forced to wash and brush her teeth in supermarket toilets and has spent almost a fortnight in a state of high anxiety.

Speaking to Liverpool Echo, Nikki said: “I just need a little bit of help. I know there’s people worse off than me but it has been probably the hardest time of my life.

“It’s more about the dogs than anything. I just feel so bad for them, I think if I didn’t have anything else to worry about apart from myself it wouldn’t be quite as bad.

“Junior is 18 months old and he barks at the slightest sound so you just don’t settle. It hasn’t been too cold, and I feel like I have been complaining too much because at least I have a car to sleep in.

“It’s quite scary because you just don’t know who is coming up, especially with Junior barking at everything so you’re always on edge.

“Liverpool [Council] said I was not a priority and it should be Wirral Council. The whole thing has been a battle.

It has been probably the hardest time of my life

A spokesman for Wirral Council, controlled by the Labour Party, said it was contacted on December 24, 2021, and its Housing Options team had directed Nikki to the Outreach Team to “assist further with accommodation” but that the offer was “not taken up”.

But Nikki is adamant she was told Wirral Council could not help her and, in fact, closed her case.

With nowhere to go on Christmas Eve, Nikki again slept in the car by New Brighton Promenade in Wallasey, Wirral, where she awoke on Christmas morning.

Describing Christmas Day, she said: “I just cried. It was the most miserable day to be honest.

“I tried to busy myself, I took the dogs on a marathon walk and tried to keep my mind on something else but it was hard to do that.

“You just don’t want to bother anyone and I didn’t tell my friends until that night.”

On December 29, with her mental health suffering, Nikki called a crisis line who alerted Merseyside Police.

She said: “The police were fantastic really, they came and got me and took me to the station and phoned the outreach teams for me, they said ‘you need to help this lady’.

“I found out then that Wirral Council had closed my case.”

Nikki claims she spoke with officials from both councils, but despite outreach workers from Liverpool coming to assess her, no offer of emergency housing has been made.

There were two nights of respite when a charity secured a room in the Ibis Hotel on Dale Street, Liverpool City Centre but, as of yesterday, Nikki was back on the streets with her dogs.

Nikki, who says she had a traumatic childhood and has no immediate family to call on, is now facing an uncertain future and says she may have to give up her dogs so she can continue to work.

She said: “I can’t go and work a 12 hour shift in the hospital and leave them in the car. I am going to try and get them fostered temporarily.”

‘Local connection’ rules surrounding homelessness state a rough sleeper must have lived in the area for six months before an offer of housing can be made.

The local connection rule can be ignored in situations when Severe Weather Emergency Protocol (SWEP) is activated, but in Liverpool that requires the temperature to drop below 2°C.

At the beginning of the pandemic, councils were provided with funding by the government to house all rough sleepers identified in their patch regardless of local connection or immigration status.

In Liverpool that scheme, known as Everyone In, ended and the council now requires proof of a local connection to place rough sleepers in emergency accommodation.

“As such this individual was provided with the Outreach Team contact who could assist her further with accommodation if she had nowhere else to go. It is understood this offer was not taken up.

“Subsequent contact has been made and further assistance offered, however, it is understood this person has chosen to seek accommodation outside of the borough, although the option remains for her to take up relevant support if needed in Wirral.”