Every one of those names carries with it a gloriously uplifting story of stoicism or generosity of spirit that would make the wartime pilots of Britain’s most famous fighter glow with pride. “I am constantly humbled and inspired by the bravery and goodwill of people and so, yes, it does get pretty emotional sometimes when I am up there flying and I think of the names of so many incredible people,” admits John, 60, boss of a family-run aircraft restoration company at the Duxford aerodrome in Cambridgeshire, home of the Imperial War Museum’s largest aviation collection.

As a thank-you to NHS staff and carers during lockdown, John started doing short flights in his area, knowing the sight of a Spitfire always boosts morale. Nurses, doctors and hospital staff appreciated the Thursday evening flights that coincided with the nationwide clap for the NHS.

Then he came up with the idea of writing “Thank U NHS” in large white letters on the underside of the wings and fuselage of the former photo reconnaissance Spitfire, known simply as “L”, capturing nationwide attention.

Following that, his son George, 28, a photographer, had a lightbulb moment that would raise money for NHS charities – some £14,000 so far – and allow people to share more fully in the Spitfire experience. A JustGiving page was set up to allow members of the public to donate money to NHS charities and nominate a name to be written on the aircraft. People caught on fast to the inspired idea and each day John, his wife Amanda, 58, George and his brother Alex, 24, an engineer in the business, see who has signed up.

Reading through the nominations brings a lump to the throat. A few days ago, Alison Thorpe wrote: “Richard Chesman. Very supportive father and partner. Very sadly passed away on Thursday but the NHS staff took him to see the NHS Spitfire on the Saturday before when it flew over our local hospital.”

Kirsty wrote: “I nominate my uncle HJW Brown. He was in the RAF and sadly passed away in 2020 from cancer.

“We couldn’t say goodbye due to Covid and we want to honour him. He was a huge fan of the Spitfire.” 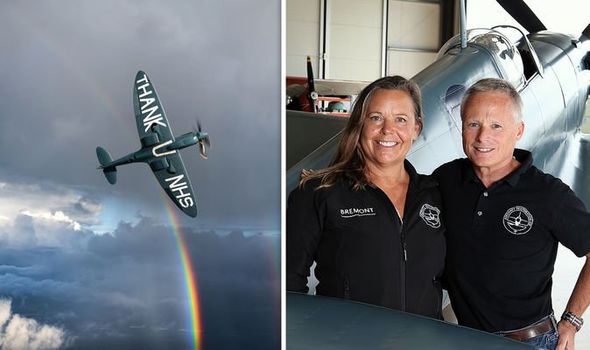 Cath Teague shared a similar sentiment: “I nominate Andy Carpenter, my partner, who supported me when my mum passed in May during lockdown. He loves Spitfires and rushes out to the garden everytime one passes our home in Folkestone.”

An anonymous contributor nominated Jason Hyland, explaining: “Thank you for being such a wonderful daddy and husband, and working tirelessly as a paediatric intensive care charge nurse throughout these challenging times. We love you.”

Every day, her list at the ready, Amanda leaves her desk in the hangar and walks over to the Spitfire, gets out her white pen and adds more names.

“The first name I wrote on the tail fin was ‘Cassie McGee’ and, when I started, I had no idea how many there would be so we’ve all been amazed by the way people have responded, she explains. I’m well on the way to filling one side of the tail fin already with 817 names and then they’ll go all over the rest of the Spitfire.”

Watching Amanda at work it’s obvious the job has become a labour of love.

She takes great care to make sure every name is spelt correctly and written neatly on straight lines, avoiding the aircraft’s markings. All are written in the same style and shape and, like the Thank U NHS slogan, in white so they stand out against the deep blue/green colour of the aircraft. 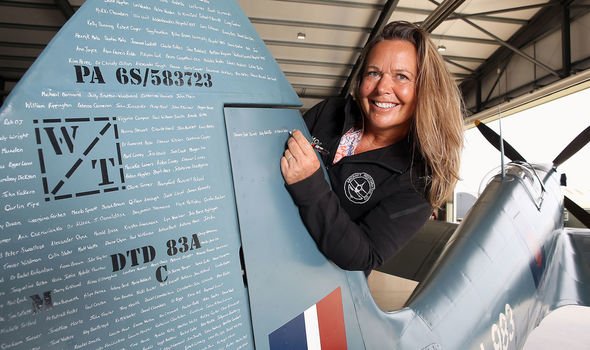 The names provide a poignant snapshot of the heartache and hopes of so many people whose lives have been affected by the Covid-19 pandemic.

Seeing them on a Spitfire seems strangely fitting. Like that other great British fighter aircraft, the Hurricane, it continues to symbolise so many emotions in the national psyche, not least freedom, courage and pride.

But John’s Spitfire, which he acquired seven years ago, has always been a little bit special since she first served at RAF Benson, having been built in 1944.

“Those photographs were vital for the war effort. She had no machine guns, so speed was the only way to get away from enemy aircraft. Her colour scheme meant she blended in beautifully with the sea, so she would have been difficult to spot, but it would have been a pretty scary job for the pilots flying over enemy territory.”

As well as scouring the French coastline for German positions, these types of Spitfire were used to monitor the progress of Allied armies as they fought their way towards Nazi Germany following the D-Day landings of June 1944.

Each day hundreds of photographs would have been analysed and some were almost certainly viewed by Winston Churchill.

As the advancing Allied armies went deep into Germany, this aircraft was assigned to take shots of what was happening on the ground in eastern European countries, again providing priceless intelligence. Emerging unscathed after the war, the aircraft played a key role in cementing British and American relations and created a new world air speed record for the famous female pilot, Lettice Curtis.

Livingston Satterthwaite, civil air attache at the American Embassy in London after the war, was so impressed by the British fighters that he wanted to own one. However, the diplomat could not fly so enlisted the help of Devon-born aviator and flight test engineer Lettice.

She had joined the British Air Transport Auxiliary in 1940 and played a major role during the war years delivering newly built aircraft – including being the first woman to deliver an Avro Lancaster bomber.

Having purchased the surviving photo reconaissance aircraft from the government, Livingston entered Lettice into an air race at Lympne aerodrome in Kent on August 28, 1948.

Such events using ex-military Spitfires and Hurricanes were hugely popular in the gruelling post-war years.

More than that, though, up for grabs at Lympne was a chance to create a new world record for speed over a 60-mile circuit around the aerodrome.

The female title had been set by American Jacqueline Cochran at 292mph. However, in Livingston’s Spitfire, Lettice smashed the record, reaching an incredible 313mph and creating a new world record for women which stands to this day. John has a special folder of pictures of Lettice in the Spitfire, now his own personal pride and joy.

“The history of the aircraft is fascinating, right from its service in the war, through to creating the new record for women pilots and now as the NHS Spitfire as she has become known,” he says sitting in the cockpit as he prepares to take her up for a spin.

A few seconds later the Merlin engine roars into life with its unmistakable growl, and he disappears into the skies, before perfecting his turns over Duxford. 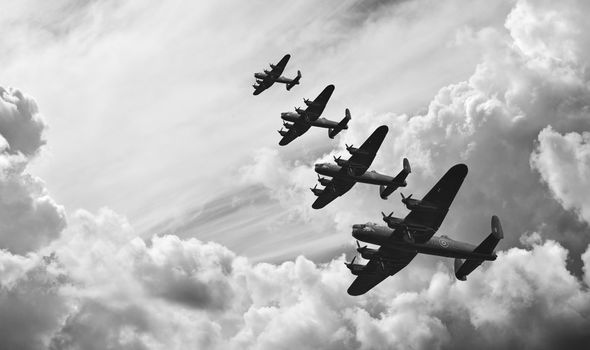 Having disappeared momentarily into the vast sky, a dot on the horizon looms suddenly into view before banking just 100ft above the runway to reveal the NHS slogan in all its glory.

George says: “It’s a fantastic thrill for people on the ground when dad flies low towards them and then suddenly turns to show the message. People start waving and clapping with huge smiles on their faces.“One day I went up in another aircraft to take some pictures. Suddenly two rainbows appeared in the sky and I asked dad to bank quickly, so I have a shot of ‘L’ with the rainbow. It’s one of those once-in-a-lifetime shots we all treasure.”

Phyliss, 87, lives in a nursing home in Bedford, which will soon be visited by the NHS Spitfire, tipping a wing to his mum who has coped bravely during lockdown.

Ultimately, it is hoped that as many as 80,000 names will cover the Spitfire by September 20, when she will close the 80th anniversary Battle of Britain air show leading a Red Arrows display at IWM Duxford.

“It would be quite a sight to see L completely covered in names by then,” says engineer John, who has been running the Aircraft Restoration Company at Duxford since 1991 and is widely regarded as being the world’s best restorer of Spitfires.

More than £14,000 has been raised for NHS Charities Together, but nobody knows how much that will rise by the time the appeal stops on September 20. The sky’s the limit!