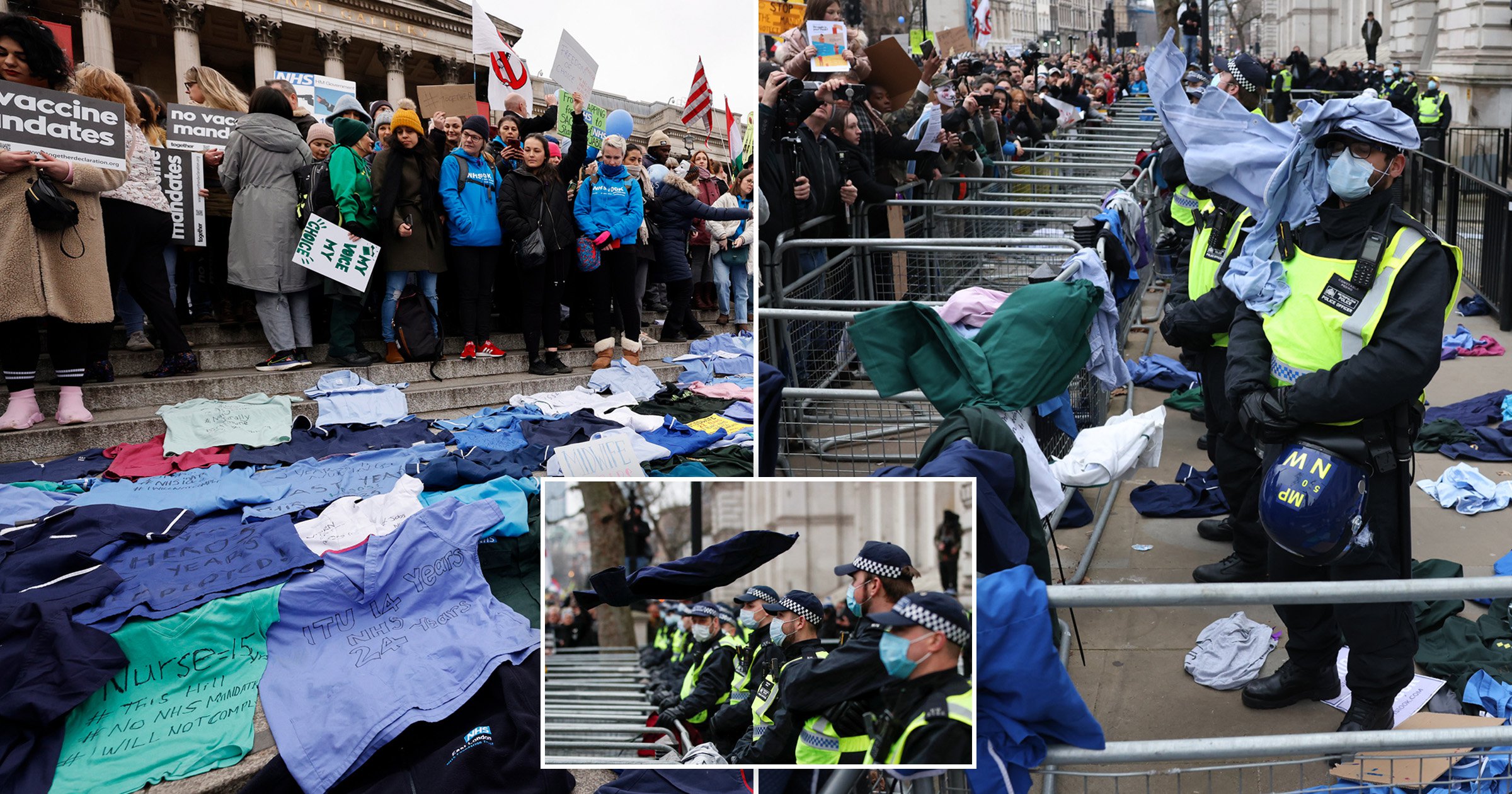 Thousands of NHS workers and anti-vaxxers have protested against compulsory Covid jabs across the country.

Healthcare staff were pictured throwing their scrubs at police outside Downing Street in London, while crowds chanted ‘no vax mandate’.

Well known anti-vaxxer Piers Corbyn was spotted amongst the masses as demonstrators initially gathered outside the BBC Broadcasting House on Saturday.

Meanwhile, protesters in cities including Manchester, Birmingham and Leeds were seen holding up signs saying: ‘Heros to zeros – from clapping to sacking’.

Formal warnings of dismissal are due to be issued from next month as more than 80,000 staff remain unvaccinated.

But reports suggest Boris Johnson could make another last minute U-turn on compulsory vaccines for the NHS.

The rule could be delayed by six months as the prime minister attempts to stop a Tory revolt, The Telegraph claims.

The British leader’s fate is hanging in the balance as the UK awaits the Sue Gray report that will look into alleged lockdown-breaking parties in Downing Street.

A Whitehall source apparently said the requirement is likely to be ‘kicked down the road’ amid demands from Conservative backbenchers for it to be scrapped completely.

As the situation stands, all frontline workers are required to have both doses of the Covid jab by April 1.

This means by February 3 the first jab must have been administered.

NHS England guidance says notices will be issued from February 4, with March 31 marking the end of the notice period.

One nurse at a protest in Leeds revealed she has chosen to walk away from the job she has been in for 30 years rather than have the vaccine.

Specialist nurse Cara Barnes, from West Yorkshire, claims the jab – which the World Health Organisation says has saved hundreds of thousands of lives – is  an ‘experimental drug’.

She said: ‘I am not prepared to be injected with an experimental drug.

‘Coercion is not a choice. It is not the fault of the NHS but I am disappointed – this is not how I saw my 30-year career-ending.’

David Hesford, 52, who has worked in the NHS for 26 years, refused to disclose his vaccination status but said ‘freedom is choice’.

The senior health care support officer said: ‘If the government are going to sack me then they obviously do not care about me.

‘Freedom is the first choice. I have chosen not to divulge my vaccination status – it is about choice.’

Ambulance worker Christabelle Gregory, 32, who was protesting in London, said: ‘People were once clapping for us but there’s no appreciation any more. I’m young and I’ve got antibodies from working on the frontline, so I don’t want the vaccine.’

Some demonstrators wore blue hoodies made by the NHS100k campaign group, which was created to oppose the NHS mandate.

An Ambulance worker’s uniform was left hanging in Regent’s Park, with a message reading: ‘Paramedic 9 years, clapping on Thursday, spat out on Monday.’

Deputy Prime Minister Dominic Raab has played down suggestions the deadline could be delayed, saying the service had greater ‘resilience’ if staff were forced to leave because they would not get vaccinated.

‘Nine out of 10 NHS staff have now come forward and had their vaccine. That is critically important’, he told the BBC’s Sunday Morning programme.

‘I do think that we continue to call for those (who are unvaccinated) to come forward to be boosted or vaccinated before the deadline but I think ultimately we have to make sure that we don’t have people putting patients at risk if they are not vaccinated.

‘The deadline is there to protect the most vulnerable in our hospitals but we have got the resilience because we have got nearly 5,000 more doctors, nearly 11,000 more nurses than we did in 2020.’