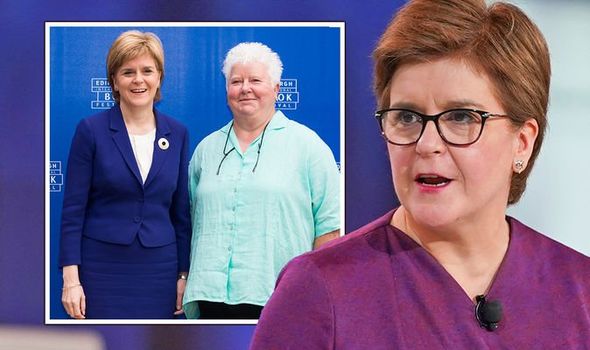 The SNP leader played host to Val McDermid – a Scottish crime writer and supporter of the First Minister – at Bute House in Edinburgh in June 2019. However, Ms Sturgeon was accused of potential “cronyism” as it was unclear whether the event was privately paid for, or whether it was funded by the taxpayer.

The Scottish Government Ministerial code states that when ministers host “party or personal events” in the First Minister’s official residence, it “should be at their own or at party expense, with no cost falling on the public purse.”

Both Ms McDermid and Ms Sturgeon deny any wrongdoing.

In March, Ms Sturgeon was cleared of misconduct with regards to whether she had misled the Scottish Parliament over what she knew and when concerning sexual assault allegations made against Alex Salmond, the former SNP First Minister.

An independent inquiry found she had not deliberately given an “incomplete narrative of events” to MSPs in Holyrood.

Speaking to the Scottish Daily Express, he said the event “raises the spectre of cronyism at the heart of the Scottish political establishment.”

Mr Bibby added: “We need to know if the First Minister adhered to the Ministerial Code, whether it is common practice to use Bute House in this manner and where the cost for this event fell.”

He urged Ms Sturgeon to “come clean” over the “serious matter”.

In a statement, Ms McDermid insisted the event was paid for “in its entirety” by her publisher Little, Brown and Company, including the “room hire, staff costs, drinks and canapes”.

She added: “They asked for this because Bute House features in the book.

“I imagine the Scottish Government made a profit on the night.”

A spokesperson for the First Minister said: “These comments are utterly pathetic.

“The book event in question was funded by the publishers, not the taxpayer – and it was held at Bute House because it features in the book.

“The First Minister is a longstanding champion of Scotland’s thriving literary scene and has been involved in countless events celebrating a broad spectrum of Scottish authors – regardless of their political persuasion.”

In March this year, Ms Sturgeon gave evidence to an inquiry concerning allegations made against Mr Salmond by nine women.

The First Minister had said that she had first learned of the complaints against Mr Salmond from him at her home on April 2, 2018.

However, she later said she had “forgotten” about a meeting with his former chief of staff on March 29 that year.

An inquiry by lawyer James Hamilton cleared her of breaching the Ministerial Code – which states that anyone who deliberately misleads Holyrood should resign.

His report said that Ms Sturgeon had given an “incomplete narrative of events”.

But he said that this was a “genuine failure of recollection”, and so not deliberate.

Mr Salmond was cleared of 13 charges of sexual assault after a separate High Court trial in March last year.