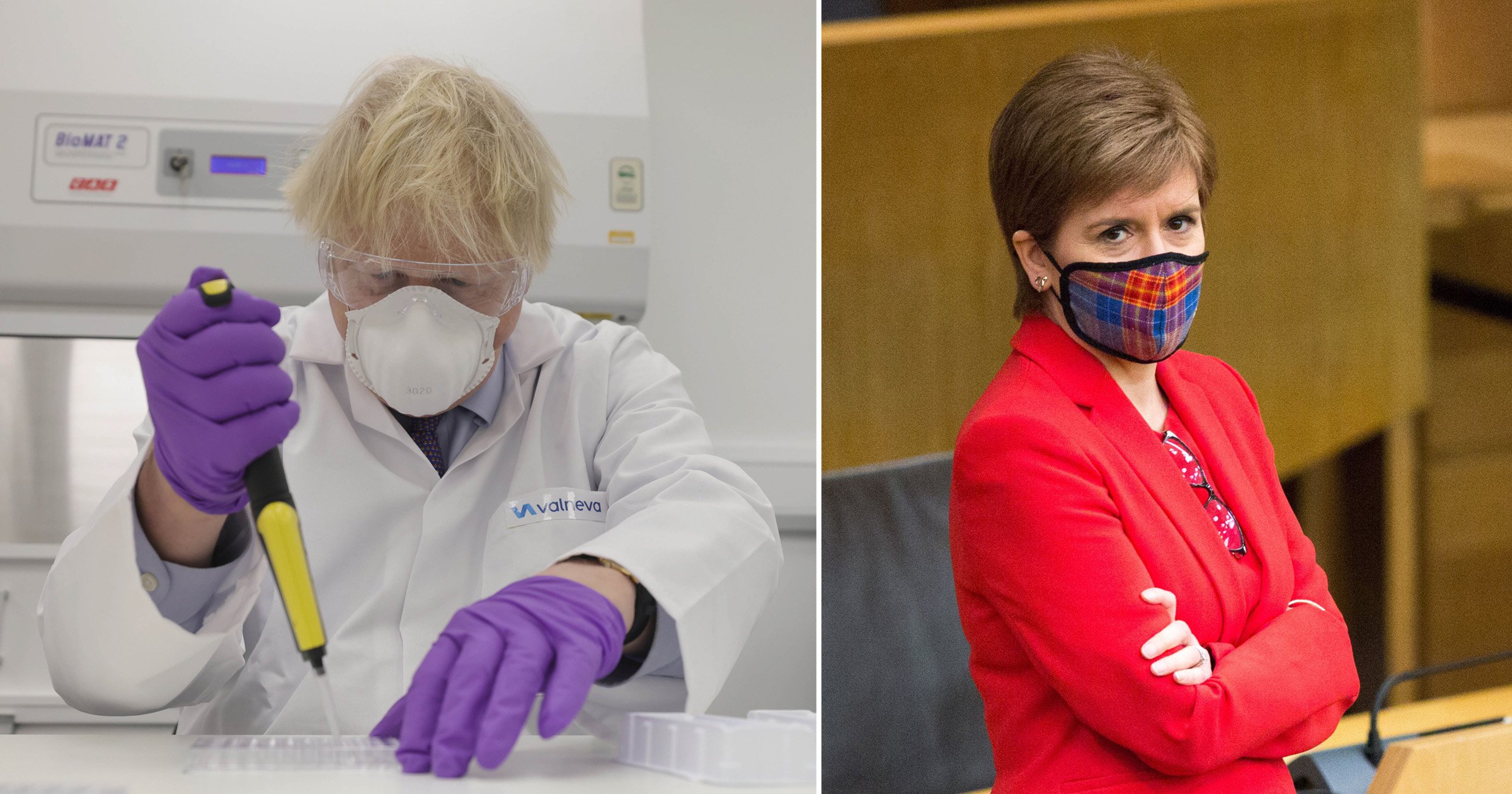 Nicola Sturgeon has said she will publish confidential data on the supply of coronavirus vaccines, despite Boris Johnson’s pleas for her to keep quiet.

The Scottish First Minister said she would reveal the figures in response to claims she is failing to roll out the jab fast enough in her country.

She was accused of siding with the EU, who are currently locked in a standoff with Britain over its supply of the vaccine made by Oxford and AstraZeneca.

At a time when Brussels are demanding millions of the UK’s doses because deliveries of theirs were delayed, Sturgeon was called ‘deeply irresponsible’ by Scottish Tory leader Douglas Ross for putting her politics first.

During a visit to Scotland today, Boris Johnson said he favoured ‘maximum possible transparency’ but said Britain must ‘continue to have national security of supply’.

It is feared revealing the details could aggravate tensions with the EU and other parts of the world and lead to supplies being diverted.

But speaking at Holyrood today, Sturgeon told MSPs: ‘I’ve said to my officials actually, regardless of what they say, I think we will just go back to publishing the actual supply figures from next week so we all have transparency around that.’

She claimed ministers in the UK were having a ‘hissy fit’ over the publication of the figures and said accused them of of briefing ‘misleading figures on supply’.

It comes after Scottish Conservative leader in Holyrood Ruth Davidson questioned Sturgeon on why just Just 462,000 people in Scotland have received a first dose of the vaccine.

Sturgeon accused Downing Street of double standards by briefing the one million figure figure ‘through spin to the media’, while urging her to keep supply data secret.

She said the nation had been allocated one million of the UK’s jabs but was still failing to reach at risk people.

So far, 11.5% of England’s population has been vaccinated, compared to only 8.5% north of the border, the Telegraph reports.

The Scottish Government took its vaccine rollout plan down from its website earlier this month.

A Whitehall source told the Herald: ‘The reason we didn’t want to publish these figures was because everyone in the world wants these vaccines.’

‘If other countries see how much we are getting, they are likely to put pressure on the drug firms to give them some of our allocation.’

The European Commission and AstraZeneca are in dispute over 60 million to 75 million doses, with the manufacturer saying they could only deliver a fraction of the jabs promised due to a production problem.

AstraZeneca CEO, Pascal Soriot, insisted it had also had ‘teething issues’ with Britain’s supply – but because UK officials signed its contract three months earlier than the bloc, the disruption was fixed ahead of the EU.

Brussels suspects the firm has been giving Britain preferential treatment and sent officials to its facility in Belgium earlier today to check if they really were having supply issues.