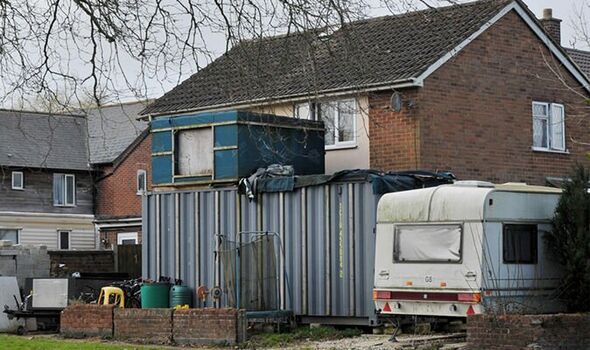 Lillie Goddard, who previously featured in the Channel 5 documentary ‘My Nightmare Neighbour Next Door’, was said to be living in the static home alongside her £170,000 property.

Ms Goddard previously had a shipping container in the garden in Swindon in Wilts, and faced years of complaints from neighbours.

A court has now ruled the static caravan must be removed from their garden.

At Swindon County Court a judge ruled that their “quiet residential area has been inconvenienced” by the caravan.

The caravan must be gone by August 5, or the council will remove it.

The court also heard her and husband Mark’s names are ‘Lord and Lady Goddard’.

Speaking at the property earlier in June, Mark said his wife bought the English aristocracy title several years ago.

There was initially not enough room in the garden for the caravan, which arrived in July 2019, before a wall was partially removed to accommodate it.

However, Swindon Borough Council claimed that this broke several covenants – legal rules contained with the deeds of a property – which set out what can and cannot be done with the land.

Council prosecutor Daryl Bigwood told the court there are three covenants that were breached which state:

He said that Lady and Lord Goddard breached all three.

The court heard that the static home “affected the amenity of the area”, residents were asked to move their cars to make way for it and that the council has “been put to some expense”.

Lady Goddard, who represented herself via video link, claimed that the covenants did not apply to her.

She said that as the council sold the house in 1997 to another buyer, and she was not aware they existed, they did not apply.

But deciding on the case, District Judge Peter Hatvany said that it was “clear” the covenants did apply, and found that they were breached.

He said: “She has made attempts as to where it can be moved. She simply doesn’t know how she can comply.

“She has very limited finances and is worried about that.”

Lady Goddard will have to meet the council’s costs of £5,000.

Speaking at home, ‘Lord Goddard’ said his wife resides in the caravan with her disabled mother – but she is “making arrangements” to have it moved following the court’s decision.

He said: “I’ve not done anything wrong myself, not personally.”

“The problem is, [my wife] has misinterpreted the law. It could have been dealt with a lot differently.

“She offered to put a fence up there, it would have been fenced off and you wouldn’t see anything – but the council wouldn’t allow it.

“I know Lillie’s not perfect, but it could have been resolved completely differently had people come up to her and spoken to her normally.”

Lord Goddard said Lady Lillie’s disabled mother – who also lived in the caravan – is going to be moved to another of their properties in the Swindon area once the caravan has been removed.

The newly employed coach driver claims the only ‘nightmare neighbour’ in his street is the woman who continuously reports everything he and Lady Goddard get up to.

Councillor Gary Sumner, the cabinet member for strategic infrastructure, transport and planning, said: “I am really pleased the court supported our application for an injunction as the caravan, and container before it, had been causing real issues for local residents.

“This has been a long, drawn out process which has been going on for many years and it is a shame we have had to go down the legal route to have the caravan removed.

“I look forward to seeing it finally taken away so residents can begin to put this whole episode behind them.”