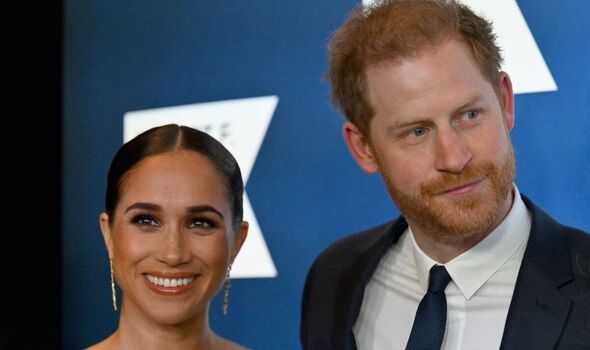 Kathy Griffin comments on how Prince Harry and Meghan met

Prince Harry has been told that the Royal Family will remain silent and will not issue an apology until he “admits his fault” in the ongoing disputes. The Duke and Duchess of Sussex made a series of explosive and incendiary claims in their Netflix docuseries aired last week and watched by millions around the globe.

It is now claimed that the former Royal couple wants a face-to-face meeting with members of the Firm to talk through their grievances.

In particular, they are said to want the Royal Family to acknowledge the pain and hurt they put the couple through.

But Katie Nichols, Vanity Fair’s Royal Editor, said that any reconciliation between the warring parties can only come about if Harry and Meghan also admit they have made mistakes.

She said until then the Palace is likely to maintain a “dignified silence” for now in public.

The author of the New Royals told OK! Magazine: “What needs to happen is an admission that there have been faults on both sides and once there has been that admission, that may pave the way for a reconciliation.”

She added: “But Charles knows that a monarchy divided is not a monarchy the world wants to see.”

Buckingham Palace has refused to comment on Harry and Meghan’s documentary, despite the furore it has created.

Ms Nichols, however, believes this is the right way for the Firm to proceed, if it wants to stop the issue gaining more traction.

“I think the Palace’s stance of never complain, never explain in this instance is absolutely the right strategy because if they comment they will only fuel the narrative and allow the story more oxygen to run.

“I think by saying nothing it’s a dignified silence.”

The Netflix series has rocked Royal fans as it vividly shows deep splits among the family and bitter resentments.

Among the bombshell revelations was Harry’s admission that his brother William had “screamed and shouted” at him.

The disgruntled Duke of Sussex also accused his father, King Charles, of lying during the Sandringham meeting where the couple said they wanted to take a step back from Royal duties.

Harry revealed: “It was terrifying to have my brother scream and shout at me, and my father say things that just simply weren’t true, and my grandmother, you know, quietly sit there, and sort of take it all in.

“But you have to understand that, from the family’s perspective, especially from hers, there are ways of doing things, and her ultimate sort of mission, goal, slash responsibility is the institution.”

Meghan also expanded on her depression that led her to contemplate suicide.

She again said she had wanted to get help but had been refused, as the Palace was worried how this could damage the reputation of the Royal Family.

She said: “They were worried about how it would look for the institution.”

Harry added that the Firm was aware of her mental health struggles, but believed the answer was to simply tough it out.

He said: “It was as if to say, ‘Well, you know, everybody else has dealt with it, why can’t she deal with it?’

“But this was different.”