Speaking to RT in Edinburgh before his ill-fated trip to Newcastle, the Brexit Party leader laid into Ms Sturgeon for the post-Brexit narrative she had spun. He said: “The impression that’s often given by Nicola Sturgeon is that almost everybody in Scotland thinks the EU is a fantastic idea. The reality is perhaps 30 percent of their own voters, because they’re actually genuinely nationalists, voted to leave the EU.

“So I think the SNP are in a funny place with this.

“You can want separation from the UK but don’t sell it as independence.

“Because you cannot be an independent country and be part of the EU.”

Mr Farage is now pressing charges against the man who threw a milkshake at him at a ‘walkabout’ in central Newcastle. 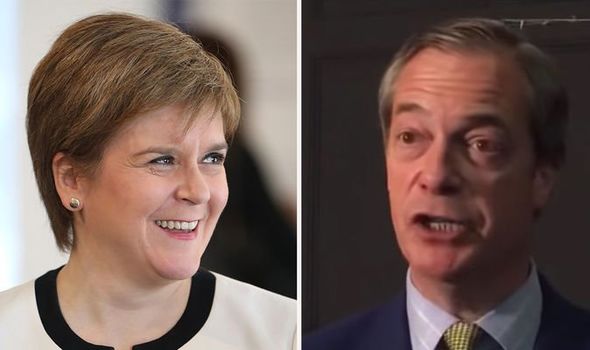 Lambasting his security for not seeing the offender sooner, the former UKIP MP stormed back to his car.

The following day, Mr Farage accused the Electoral Commission of being “absolutely full of Remainers” as the watchdog visited the Brexit Party’s headquarters amid a review into its donations system.

Mr Farage claimed the regulator was staffed by establishment figures and was not a neutral organisation – and said he believed his party was “more compliant” than any others standing in the European elections.

The Brexit Party leader, in an interview with the Press Association, also labelled Channel 4 News as “political activists”, after it reported that insurance tycoon Arron Banks had spent approximately £450,000 on Mr Farage in the year following the EU referendum in 2016.

Discussing his party’s donation system, he said: “I’ve got a team of four qualified accountants looking after our money, our income. I bet we’re more compliant than any of the other parties in this election.

“I’ve crossed with the Electoral Commission before – they are not a neutral organisation, absolutely full of Remainers, full of establishment figures.

“We are about not just leaving the European Union, the Brexit Party is about changing politics for good – getting SW1 and Westminster to reflect the country more broadly and the Electoral Commission are part of that huge reform that is needed.”

Mr Farage said his party was looking for repeat donations, and had sent money back if it was unsure where it had come from.

“I’m not stupid. I’ve set this up to take on the Labour and Conservative parties who, I think, have betrayed the biggest democratic vote in our nation’s history. I know that when you do that the establishment will not come out with a tray of gin and tonics and say ‘well done’.