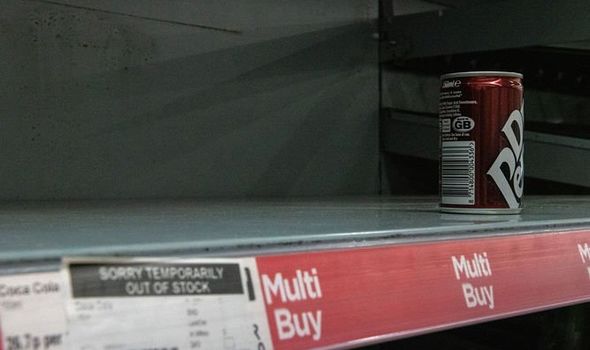 Iceland boss Richard Walker said he is confident stores will not run out of goods, insisting: “There is no need to panic buy.” His message was reiterated by Downing Street, who urged people not to stockpile after food production delays and fuel rationing rocked consumers.

Business Minister Paul Scully said: “There is no need for people to go out and panic buy.”

BP and Esso took the drastic measures yesterday at a small number of locations after being hit by a lack of tanker drivers.

And a shortage of lorry drivers has remained at around 100,000, according to the Road Haulage Association – despite Government attempts to fast-track training.

There have also been recent problems with the UK’s carbon dioxide supply, needed for a significant amount of food production.

Writing in today’s Daily Express, Iceland boss Mr Walker said: “We have weathered this storm for some time now and although we are currently reliant on a three-week ‘sticking plaster’ deal, the Government acted swiftly to resolve the CO2 shortage in the short term.”

No 10 has insisted fuel and food supplies are “very resilient” and warned against stockpiling, saying there is a “robust supply chain”.

It said there is no petrol shortage in the UK and urged people to “continue to buy fuel as normal”.

A No 10 spokesman said: “We obviously recognise the challenges faced by the industry and we’re taking steps to support them.

“We acknowledge there are issues facing many industries across the UK, and not just in terms of HGV drivers.”

Industry leaders and MPs have called on the Government to take swift action to keep supplies moving and customer bills down.

Inflation is tipped to exceed four percent by the end of the year and the country has been warned it should brace itself for a tough winter.

Esso owner ExxonMobil said a “small number” of its Tesco Alliance petrol forecourts have been hit.

The Government has tried to speed up the process for drivers trying to gain their HGV licences. But trade association Logistics UK has said they must now provide up to 10,000 temporary work visas for trained EU drivers to paper over the cracks.

A spokeswoman said the ­shortage is “very serious” and needs “urgent Government and industry action”.

Rod McKenzie, of the Road Haulage Association, said: “This is a cocktail of chaos, and I’m afraid it’s getting worse because the ­attrition rate is against us. We have got more drivers leaving than joining, so as every week goes by there’s something new in the supply chain that’s creaking and crumbling.”

Overseas drivers deciding to return home during the pandemic and test centre closures over the past 18 months have made the ­situation worse. Customers were also warned yesterday that the energy price cap could rise in spring if wholesale prices remain high beyond a “short spike”.

Households whose suppliers have gone bust face an immediate rise in bills after the Government said it could not guarantee they will remain on the same tariff.

Business Minister Mr Scully said: “Clearly, as Government, we need to make sure we are planning for the worst-case scenario because we want to make sure we can ­
protect consumers.”

Mr Scully said the issues could prove to be short-lived but ministers are putting plans in place in case they persist.

When asked if Britain was heading back into a winter of discontent, a reference to the 1978-79 winter when inflation and industrial action left the economy in chaos, he said: “Look, this isn’t a 1970s thing at all.”

The energy price cap will rise on October 1, hitting around 15 million customers with a 12 percent rise in bills.

It is reviewed twice a year, with the next change due in April.

Mr Scully said the Government and energy regulator Ofgem are having “conversations” about increasing it in the spring.