Britain’s prime minister has stuck by a pledge to lift restrictions on gatherings between Dec. 23 and 27 despite growing calls to do so as cases surge. 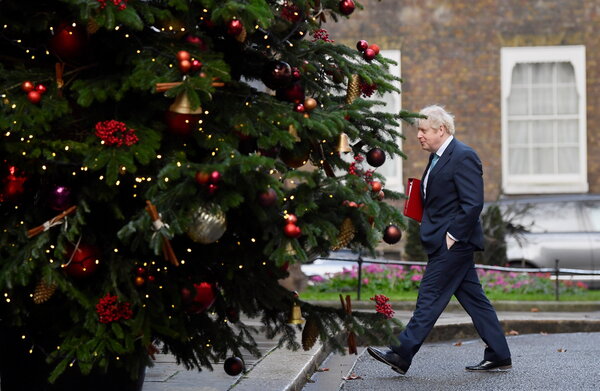 LONDON — In a year of hard decisions about how to confront the coronavirus, perhaps none has proved as anguished for Prime Minister Boris Johnson as whether to ban Britons from getting together for a little Christmas cheer.

For weeks, British tabloids have speculated darkly that Mr. Johnson would be forced to “cancel Christmas.” Some noted he would the first British leader to do so since Oliver Cromwell tried to stamp out Yuletide merrymaking during the ascetic days of the Puritan movement in the mid-17th century.

On Wednesday, Mr. Johnson stuck by his pledge to lift some important restrictions for a few precious days between Dec. 23 and 27 — a decision that attests to his deep-seated desire not to be seen as the Ebenezer Scrooge of Downing Street, as well as to the atavistic appeal of the Christmas holiday in this otherwise secular country.

Mr. Johnson has not wavered even after new cases surged in London, which prompted the government to put the capital under stricter rules between now and Dec. 23. Nor has he backed down after two British medical journals warned of the potentially dire consequences of easing the measures over Christmas.

His decision sets him apart from leaders in other European countries that cherish the season every bit as much as Britain does.

In Germany, Chancellor Angela Merkel imposed a nationwide lockdown that will extend over Dec. 25, snuffing out hopes for a reprieve after the country’s beloved Christmas markets were shuttered earlier this month. The Netherlands and the Czech Republic have also imposed lockdowns, while Italy is leaning toward one. 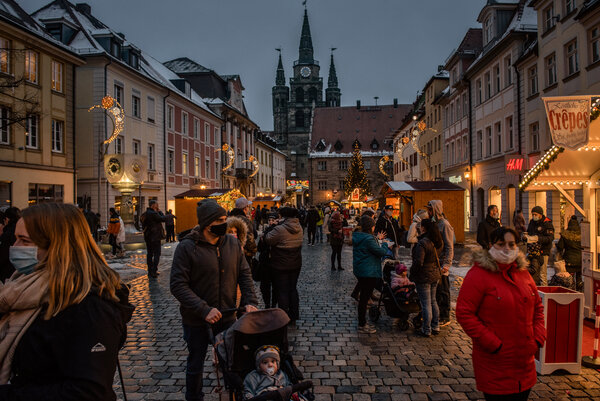 “The Christmas debate has really brought out the argument between those who believe it is all about preventing deaths and those who believe there have to be other considerations,” said Jonathan Sumption, a historian and former justice on Britain’s Supreme Court who is a vocal critic of the lockdowns.

Christmas, he said, “is now largely a nonreligious festival, but it has a lot of the resonance of family reunions that Thanksgiving has in the United States,” making it a celebration that cuts across cultural and religious boundaries.

Gathering children and grandparents around a Yuletide table — aglow with a brandy-soaked pudding; alive with the pop of Christmas crackers — exerts such a pull on the British popular imagination, Mr. Sumption said, that even if the government were to impose a lockdown, many would simply flout it.

Mr. Johnson seemed to acknowledge that reality. In a news conference, he pleaded with Britons to show caution in their social interactions by keeping family gatherings small and brief, and by putting off visits with grandparents and other elderly people until after they are vaccinated. But he said he did not want to “criminalize” those who have already made plans to spend time with their families.

“We don’t want to cancel Christmas,” he said. “That would frankly be inhuman and go against the instincts of a majority of people in this country.”

It clearly goes against his instincts. The prime minister lamented having to take such a “prescriptive” approach, even invoking the dreaded example of Cromwell himself. Back in March, he waited a week longer than most European countries to impose a lockdown. In November, he moved more slowly than other leaders in imposing fresh restrictions after a second wave of infections.

Reversing course on the rules at this late stage would only have deepened the confusion, Mr. Johnson’s defenders said. After 10 months of pandemic, they said, the public could be trusted to use common sense.

Still, the net result is a muddled situation, where the government’s rules and guidance on Christmas have diverged. The authorities in Scotland are advising tighter restrictions than their counterparts in England. In Wales, where a new lockdown looms, the law is being changed to enforce tougher measures over the festive period, too. All this is setting the stage for what medical experts fear could be a post-holiday surge in infections.

The British Medical Journal and Health Service Journal published a joint editorial this week urging Britain to follow the example of Germany. They projected there could be nearly 19,000 people in hospitals by year end — comparable to the levels in early April, at the height of the deadly first wave of the pandemic.

“We believe the government is about to blunder into another major error that will cost many lives,” the journals said.

Medical experts pointed to the explosion in cases in the United States after Thanksgiving as an omen for what Britain could expect in January. The prevalence of infections in London and the south and east raised the specter of tens of thousands of people carrying the virus to less affected parts of the country.

While experts said they were sympathetic to giving people a reward at the end of a grueling year, the rollout of the Pfizer vaccine meant they would only have to endure one last stretch of deprivation before relief comes.

“I saw both sides of this of this debate a few weeks back,” said Devi Sridhar, the head of the global public health program at the University of Edinburgh. “Now I’m convinced it’s a bad idea.”

For Mr. Johnson, a leader who craves approval, the paradox is that the public seems to back a harsher approach. Almost half of people said they believed the Christmas rules were not strict enough, according to a recent poll by Ipsos MORI. About two in five said they were right and just 10 percent said they were too tough.

Those results might seem surprising, given Britain’s deep attachment to Christmas. The festivities sprawl over two days, with Dec. 26 also a national holiday, known as Boxing Day. Some date the extravagant celebration of Christmas to the Victorian era, when it started to symbolize some of the nation’s common values.

“It was seen to symbolize the British love of home and family, their respect for tradition and the past, and a shared way of life in a society divided by class and politics,” said Martin Johnes, a professor of history at the University of Swansea.

“During the Second World War,” he said, “some suggested it was important to celebrate Christmas because it summed up everything people were fighting for.”

Giles Fraser, the rector of St. Mary’s church in Newington, South London, agreed that Christmas plays “a central part in the cultural psyche” — so much so that he said he was not sure whether the politicians making decisions fully appreciated how central it was to people’s morale.

Mr. Fraser, who works in economically deprived parts of London, said the need for celebration was particularly acute this year after the deaths, illness and job losses of the pandemic. His own parish recently suffered a blow when its church hall collapsed after a suspected arson attack.

For Mr. Fraser, the pandemic has meant planning for compromises like moving carol singing outside the church. But canceling Christmas would be “an existential blow to peoples’ well-being in a way that perhaps might not be understood elsewhere,” he said. “That is why politicians are so reluctant to take it on.”

“I will feel very rebellious,” he added, “if I am told by the government that I am not allowed to do it.”

Emergency teams had to be scrambled to protect a warehouse filled with coronavirus vaccines from flood water. Mark Pritchard, leader of Wrexham Council, said they were alerted…