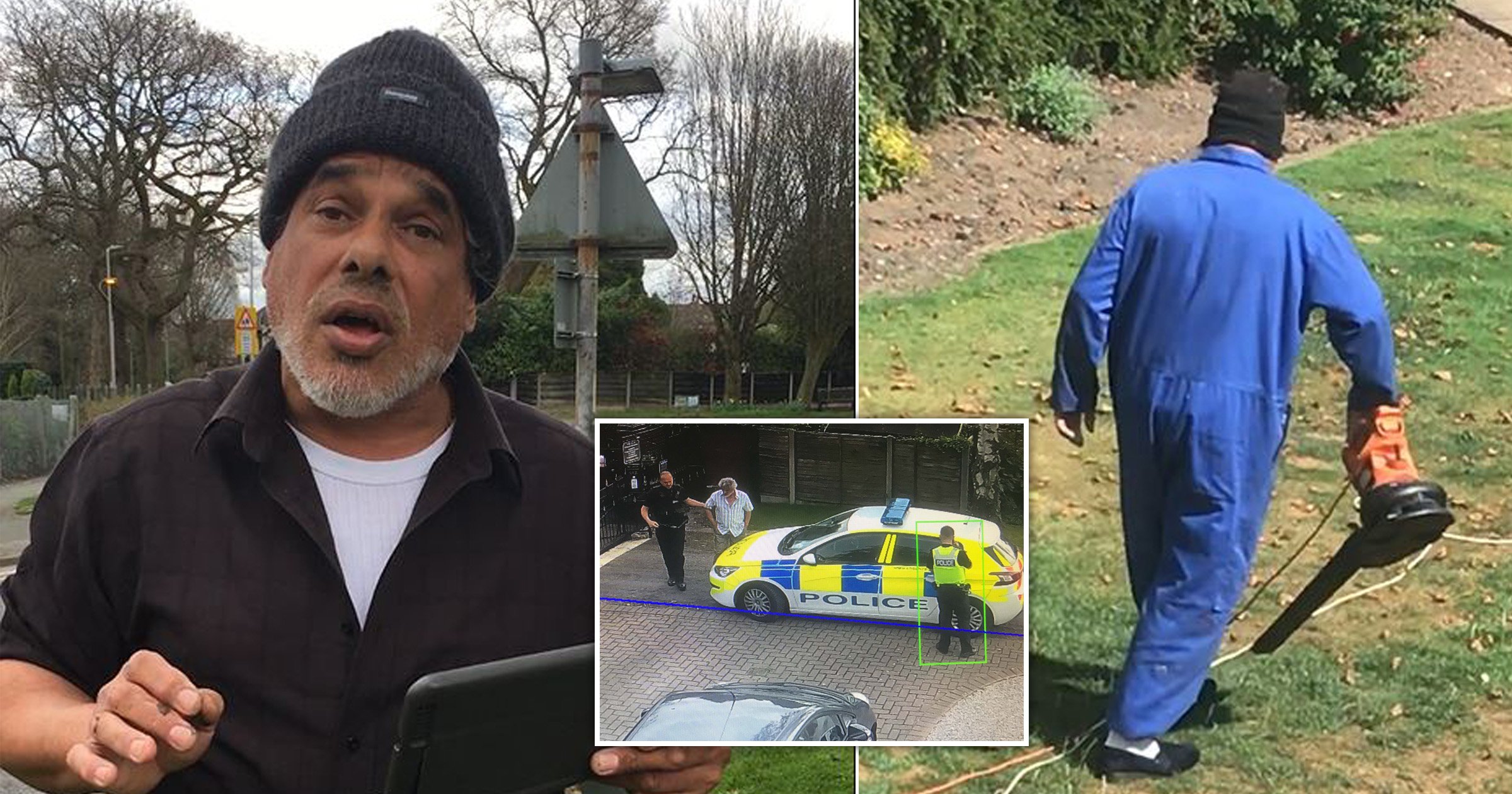 A noisy pensioner who made his neighbours’ lives a misery during a 20-year war in his cul-de-sac has walked free from court.

Michael Hall, 67, was found guilty of harassment and breaching a restraining order after launching a ‘campaign of noise’ in a quiet village street in Cheshire.

Nicknamed ‘Michael the Moron’, his frustrated neighbours said he used three leaf blowers at the same time ‘for hours’ – even when there were no leaves on the ground – and whistled paedophile Rolf Harris’ song ‘Two Little Boys’ loudly through his hedge.

Exasperated residents Timothy Royle, 54, and Peter Dean made a desperate plea to Stockport Magistrates’ Court to send the tormentor to jail.

But instead Hall was today given a one-year jail sentence suspended for two years and was ordered to do 100 hours of unpaid work.

Speaking after the sentencing, company managing director Mr Royle said: ‘It’s just a joke. He got away with it again. How many offences does he have to commit?

‘How much trouble does he have to cause? We have had twice the amount of witnesses this time – we have had statements from all the neighbours, we have so much incriminating evidence against him that’s overwhelming and yet he walks home.

‘He’ll just do exactly the same again and continue to play the game. I am absolutely frustrated and infuriated. We’ve not had a day of peace from him and to him it is just a game. 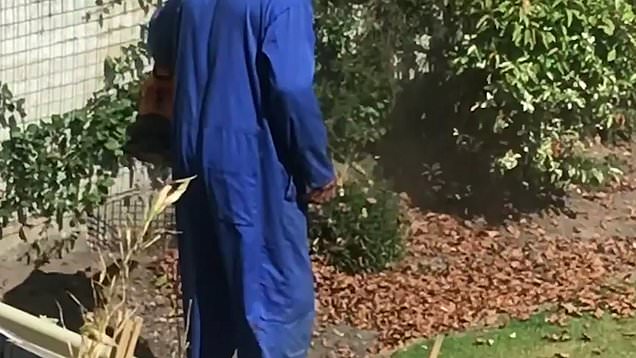 ‘He will look for other things to do to intimidate and harass me. He’ll still whistle, every time I go out and he’s out, he’ll be singing away. Nothing will change. It’s pathetic.’

Over a number of years Hall’s tormenting included routinely waking up residents of Thornton Drive, Handforth, as early as 4am by starting his noisy camper van or switching on his chainsaw and angle grinder to do some DIY.

Hall, who lives with his 73-year-old wife Pamela, also set up a number of CCTV cameras above an iron gate at their £250,000 property so he could illicitly film neighbours coming and going in the street outside.

Residents claimed one neighbour, who could no longer deal with the harassment, ended up selling his home for a reduced price just to get out of the area.

Mr Royle said he purchased his house in 2016 with a discount of £60,000 after being made aware of several problems with Hall.

‘I never thought the problems with me would arise and I never expected what would happen over the years,’ he added, ‘It has been relentless and soul destroying.’

The latest incidents took place between May and July last year – just 18 months after Hall had been given a two-year restraining order banning him from making noise during unsocial hours.

Mr Royle said: ‘The last time I was in court was when he was convicted for breaching a restraining order, it came as a great deal of surprise to me when he did not get a custodial sentence.

‘He was dancing and laughing in the courtroom in a tomfoolery manner because of his mild sentence and I even saw him doing this in the court room in front of the magistrates.

‘I was surprised they did not lock him up for this alone. They said any further approach by him to us would see him go to prison and admittedly his behaviour went quiet for a while.

‘But when we came back from a holiday in Australia, the antics started again and he started to harass myself and another neighbour and was rearrested.

‘Unless he gets a custodial sentence, I feel this will never end. He feels invincible. He still deliberately whistles and sings when I am at my house. I have suffered a great deal of distress from his disgraceful behaviour.’

In one incident he dumped hedge clippings on the driveway of Mr Royle, then called police to accuse him of ‘stealing’ them when the victim later swept them up.

Mr Royle made a number of videos documenting what happened, in which he accuses Hall of launching a ‘campaign to make as much noise as possible’ and calls him a ‘dirty, horrible, mad man’.

The dad-of-two added: ‘It is not normal behaviour. He is pathetic and so petty but I have no plans to sell my home or move away.

‘I call him “Michael The Moron” – but that was a nickname I created for my young children as otherwise it would be a lot worse.’

Hall denied the claims, and said he ‘only’ had two leaf blowers and played music through YouTube. He accused his neighbours of holding a ‘grudge’ against him.

Defence lawyer Joe Rawlings told the hearing: ‘This defendant has never been dealt with by way of a suspended sentence, so in my submission, I would ask you to step back from immediate custody. Not all matters have been exhausted yet.

‘The level of offending is very low and there is no dealings with threats or violence. The defendant is the sole primary carer of a relative, who has mobility issues. Sending him to custody would have a significant impact on that party.’

He added: ‘This is a sag and neither parties have any intention of selling their house, both are going to be remaining at their address for the foreseeable future. But my client is not at serious risk of harm to the public.’

Sentencing, JP Marilyn Gibson told the defendant: ‘You have shown no remorse at all and there has been a blatant disregard for court orders. But we are satisfied you can be rehabilitated in the community.’

As well as the suspended sentence and unpaid work, Hall was ordered to pay Mr Royle £300 compensation and another neighbour £100, and was given a new two-year restraining order. He was further told to pay £1,121 in costs.