Nadine Dorries confused her rugby union with the rugby league as she delivered a speech to mark the upcoming Rugby League World Cup scheduled for October. The Sports Secretary was recounting her favorite memory of the sport, citing the infamous drop-goal Jonny Wilkinson delivered to secure the World Cup in 2003. But fans were quick to erupt and question her preparedness as they pointed out the iconic moment was performed during the Rugby Union’s tournament.

Ms Dorries told attendees: “I’ve always quite liked the idea of rugby league. My long-standing memory is that 2003 drop-goal.

“I’ll let you into a secret, we were drinking Bloody Marys at the time, it was 11 o’clock in the morning. But wow, what a moment that was.”

The Tory frontbencher added: “I’m not going to stand here and pretend I’m an expert who watches it all the time, but it’s an incredibly physical, sometimes quite brutal sport and it often ends up in a scrum which actually reminds me very much of politics.

“I think we have a lot in common and given a lot of the media like to call me the prime minister’s attack dog, I wonder sometimes if I should give rugby a go.”

JUST IN: Boris Johnson and Erdogan square up to each other at NATO summit as Biden intervenes 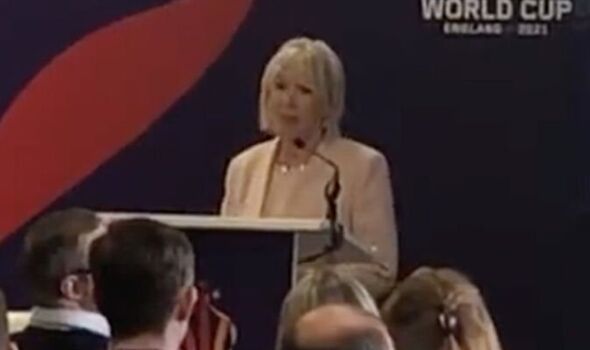 User @joekirrane wrote: “Simply moronic Ms Dorries. I’m sure you have no idea of the history of the games and how insulting that was.

“How is it possible to have no understanding of your brief?”

@pipspark added: “You should try football, own goals are your specialty.”

@crompono1 asked: “Don’t you lot have lots of backroom staff & in your case your daughter + advisors?

“You’re a Scouser, just down the East Lancs, RL is a religion. Pity you couldn’t get proper advice again….”

He wrote: “Jesus H Christ. On the day I got my tickets for @SuperLeague Magic Weekend in Newcastle this complete idiot goes to the launch of a major Rugby League event and says her top memory of the game is Jonny Wilkinson’s drop goal to win Rugby Union World Cup. Ffs sack her.

“She is supposed to be Secretary of State for Sport as well as media and culture where she is already beyond embarrassing.”

Ms Dorries later acknowledged the blunder, admitting she had followed the rugby league “much less in my lifetime”.

She wrote on Twitter: “Like Jason Robinson I may have switched codes in my speech… Both league & union have a rich heritage in the UK.

“Obviously I’ve followed rugby league much less in my lifetime, but I’m looking forward to watching England (& all the home nations) in the RL World Cup this Autumn.”