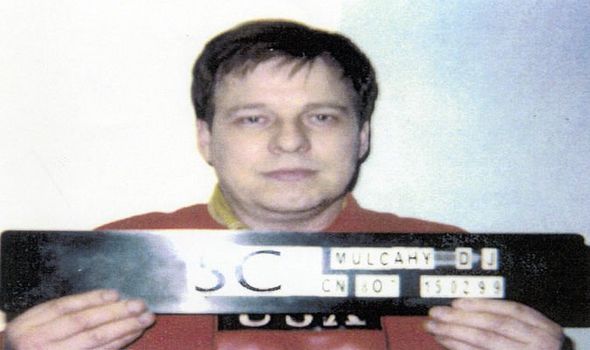 Lifer David Mulcahy, convicted 15 years after the first attack took place in 1985 from DNA evidence, wrote to the filmmakers after hearing the show was being made, calling his sadistic accomplice — John Duffy — “a monster”.

His pleadings though have been dubbed “pathetic” by police.

Senior investigating officer on the case, Mick Freeman reads the letter to camera.

“I continue to challenge my conviction for one single fact,” writes Mulcahy. “I did not commit these horrific crimes. It’s a very simple thing to say, but a very hard one for people to believe me. The mainstay of the evidence against me is from a self-proclaimed liar. He was my friend and I should have seen what he was — a monster. Yours truthfully, David Mulcahy.”

An angry Mick Freeman responds: “There’s no remorse in there whatsoever. It’s a letter from a convicted killer, a convicted rapist and these are the words he would have used back in 1999 [when interviewed by police].

“He’s clutching at straws. He knows what he’s done. It’s pathetic, really pathetic and I think it sums up him for what he is: a sad, pathetic person. And where he is at the moment is where he should stay for the rest of his life.”

The Railway Murders case dates back to December 1985 when Alison Day disappeared after getting off a train at Hackney Wick station.

Over the next six months, two more women – Maartje Tamboezer and Anne Lock were snatched at railway stations.

Rumours began to circulate that a serial killer was stalking the railways, and that he was also linked to a series of sex attacks across London.

Parents across the south-east were so fearstruck they began collecting their daughters from station car parks.

This new documentary uses dramatic reconstruction and testimony from police officers and the victims’ friends to tell every twist and turn in this disturbing case.

The landmark series also explores the devastating impact of these crimes, as well as the shocking revelation of the killers’ identity.

After the second murder, the police realised that the same horrific murder method had been used, with victims seized near stations and the use of tourniquet by the killers.

But with no DNA evidence to turn to, the police had to rely on crude blood groupings to try and narrow down their suspects.

They faced the daunting task of tracking down and interviewing over 3000 potential suspects who matched that forensic profile.

When police spoke to “number 1594” on the list of more than 3000 suspects, John Duffy’s behaviour was seen as suspicious but it would be another four months before he would ultimately pay for his crimes.

Then nine years after John Duffy has been sentenced to life for murder and rape, he started to talk in prison to forensic psychologist Jenny Cutler because he was suffering from nightmares.

He told her: “It was very much teamwork, even from school days.”

Duffy went on: “He’s not in prison; he’s never been arrested.

“I wasn’t alone in this. I was with my friend, David Mulcahy.”

One of the hallmarks of their sadistic campaigns was the playing of Michael Jackson’s zombie Thriller album in the car as they looked for their next victim.

Said Jenny Cutler: “David would play Thriller as they went out to rape. It was an unspoken agreement as their symbol for action.

“Offending was their trigger. They were buzzing — their adrenaline was going.”