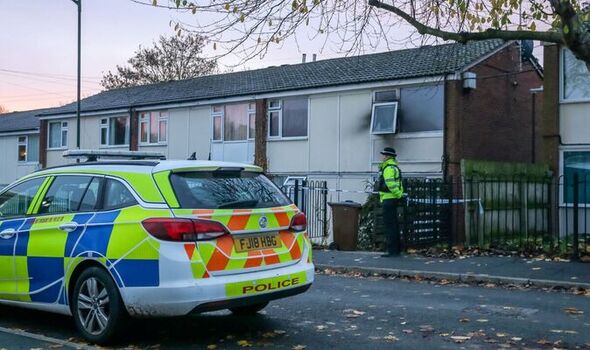 Steven Davies was in bed when flames swept through a flat above him. The girls aged one and three were rescued by fire crews but did not survive.

A woman named locally as their mother Fatoumatta Hydara, 28, was fighting for life last night.

Mr Davies said: “I just woke up and the house was on fire. I saw the fire brigade drag out the little kids.

“The smoke was horrendous. They had no chance. She was a lovely lady, she was really kind. I used to see them in the backyard. They were lovely.”

The fire in the Clifton area of Nottingham erupted early on Sunday.

Ms Hydara’s distraught husband Aboubacarr Drammeh flew in from the US.

He said yesterday: “I am just grieving. I have come straight here from the airport. I don’t know what has happened here.”

Mr Drammeh, 40, added: “This is just so upsetting.

“I haven’t started to come to terms with what has happened.”

Floral tributes in memory of the two children were laid next to a police cordon around the burnt-out flat.

A murder probe was launched after an investigation concluded that the fire was started deliberately.

Inspector Karl Thomas, from Nottinghamshire Police, said: “This was a tragic and traumatic incident and understandably residents in the area have been left distressed and deeply saddened by the deaths of two young children in their community.”

He added: “As the investigation continues, we are working closely with members of the local community, Nottinghamshire Fire and Rescue Service and other partners.

“We have also increased patrols so that the extra police visibility serves as a message of reassurance.We appreciate the support that we have been given by the local community already and would continue to urge anyone with information about this incident to get in touch.”

In a statement, the force said: “A 31-year-old man from Clifton remains in custody after being arrested on Sunday on suspicion of murder and attempted murder.”

Det Chief Insp Greg McGill, leading the investigation, said: “This is a deeply tragic incident and we have a large team working tirelessly to understand the full circumstances.”

He urged anyone “who has even the slightest bit of information, or even CCTV or dashcam footage” to call Nottinghamshire Police on 101, quoting 0110_20112022.