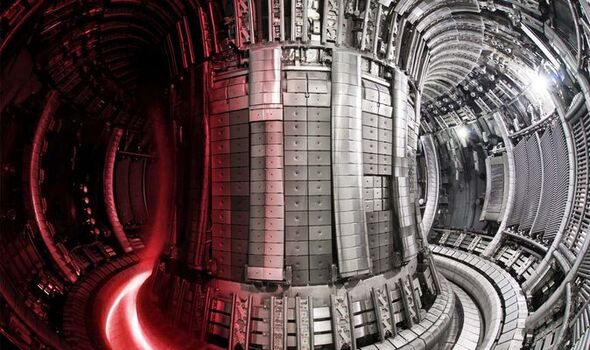 Scientists produced 59 megajoules of energy in a five-second experiment – enough to power around 10,000 homes.

And some say the technology could be commercially available within 10 to 20 years.

The energy emits no greenhouse gas emissions giving scientists hope it could eventually become a safe and sustainable part of the world’s power supply.

The Joint European Torus experimental fusion machine near Abingdon in Oxfordshire, has more than doubled previous records from 1997.

“We’re building the knowledge and developing the new technology required to deliver a low carbon, sustainable source of baseload energy that helps protect the planet. Our world needs fusion energy.”

The source is based on the same principle by which stars create heat and light.

Atoms are combined, rather than split like in a nuclear reactor, and special forms of hydrogen are used as fuel.

But harnessing and reining in the forces involved is a huge challenge, as at the heart of a fusion reactor is a scorching cloud of electrically charged gas, or plasma, many times hotter than the sun’s core.

Ian Fells, Emeritus Professor of energy conversion at the University of Newcastle, said: “The production of 59 megajoules of heat energy from fusion in five seconds is a landmark in fusion research.

“Now it is up to the engineers to translate this into carbon-free electricity and mitigate the problem of climate change.

“Fusion was initiated with the explosion of the hydrogen bomb in 1952, its potential was realised but it has taken until now to achieve five seconds of fusion.

“Ten to 20 years could see commercialisation.”

The test findings will aid the development of a larger nextgeneration version in France.

The energy is unlikely to make a significant contribution to power supplies until the second half of the century.

It is thought unlikely to be a gamechanger in helping the UK become net zero by 2050.