Engineers have solved a mystery which left villagers with broadband problems for 18 months.

Connectivity could be poor along with slow speeds from 07:00, causing issues for households trying to get online.

Openreach engineers replaced cables at Aberhosan, Powys, but it did not fix the problem so they had to think again.

They then switched to a monitoring device and found the fault was due to electrical interference emitted by a householder’s second-hand television.

The owner, who does not want to be identified, was “mortified” to find out their old TV was causing the problem, according to Openreach.

“They immediately agreed to switch it off and not use again,” said engineer Michael Jones.

Engineers walked around the village with a monitor called a spectrum analyser to try to find any “electrical noise” to help pinpoint the problem.

“At 7am, like clockwork, it happened,” said Mr Jones.

“Our device picked up a large burst of electrical interference in the village.

“It turned out that at 7am every morning the occupant would switch on their old TV which would, in-turn, knock out broadband for the entire village.”

The TV was found to be emitting a single high-level impulse noise (SHINE), which causes electrical interference in other devices.

Mr Jones said the problem has not returned since the fault was identified.

What else can cause broadband problems? 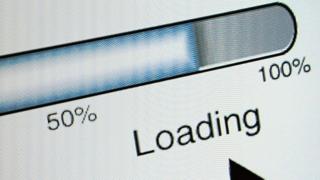 Suzanne Rutherford, Openreach chief engineer’s lead for Wales, said anything with electric components – from outdoor lights to microwaves – can potentially have an impact on broadband connections.

“We’d just advise the public to make sure that their electric appliances are properly certified and meet current British standards,” she said.

“And if you have a fault, report it to your service provider in the first instance so that we can investigate.”