Tory leadership hopeful Andrea Leadsom would secure a seven-point lead over Jeremy Corbyn if she led the Conservative Party to a General Election, according to Ipsos MORI. The survey of 1,074 adults conducted between June 7-10 on behalf of ITV found the former frontbencher would get the strongest lead on the opposition among all candidates to become the next Prime Minister. Discussing the poll on Wednesday evening, ITV Peston co-anchor Anushka Asthana said: “This is where people were asked, ‘who would you prefer to be PM if it was one of these Tory candidates or Jeremy Corbyn?’

“Andrea Leadsom actually has the biggest lead out of everyone on here, plus seven.

“Dominic Raab and Matt Hancock, are very low, not statistically different. Michael Gove doesn’t beat Jeremy Corbyn – everyone else does.”

The poll found bookies’ favourite Boris Johnson would also beat the leader of the opposition in the event of a new vote but by less than Ms Leadsom would.

Ms Asthana continued: “Boris Johnson, he has the highest positive vote in terms of people who think he could be a good PM, six points ahead of Jeremy Corbyn. 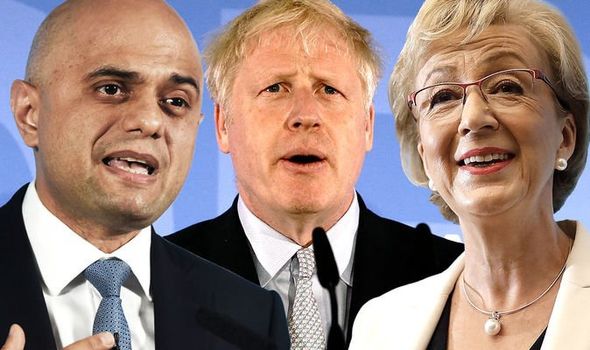 “Interestingly, the fewest people don’t know or have no preference because he is, by far, the most known. This is being driven by leavers.

“If you look at Remainers, Jeremy Corbyn has a 32-point lead over Boris.”

Ipsos MORI research director Kieran Pedley suggested Mr Johnson’s support may be driven by his popularity among the public.

Mr Pedley said: “The challenge for Johnson’s leadership rivals is that they are much less well-known than him.

“He can argue, with some justification, they as things stand he is the best places to win back disaffected Leave voters who may have deserted the party in recent times.”

The researcher however signalled a General Election could still pose a risk for the Conservative Party due to the “unpredictability” of the British political environment. 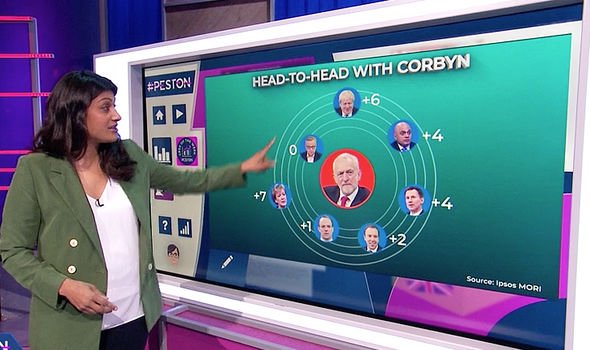 “Theresa May consistently led Corbyn on similar measures but still managed to lose her majority in 2017 and voting intention polling is currently very volatile.”

Andrea Leadsom has said she would seek a “managed exit” from the European Union on October 31.

The former Leader of the House insisted Theresa May’s Brexit Withdrawal Agreement in its entirety is “dead” but would seek to keep “elements” of the deal which is most favoured by parliament.

Asked how she would help resolve the Brexit conundrum, Ms Leadsom explained she would take elements of the Brexit withdrawal deal which can be agreed upon by both the EU and Parliament in order to achieve leaving the bloc by October 31.

She told the BBC: “It’s not having the Withdrawal Agreement which Parliament won’t accept.

“And it’s not running counter to the EU’s view that they won’t re-open the Withdrawal Agreement.

“It’s simply saying let’s take the elements that we can all agree on and implement them in all of our interests.”

The Conservative Party will hold the first round of votes on the next leader of the party on Thursday.