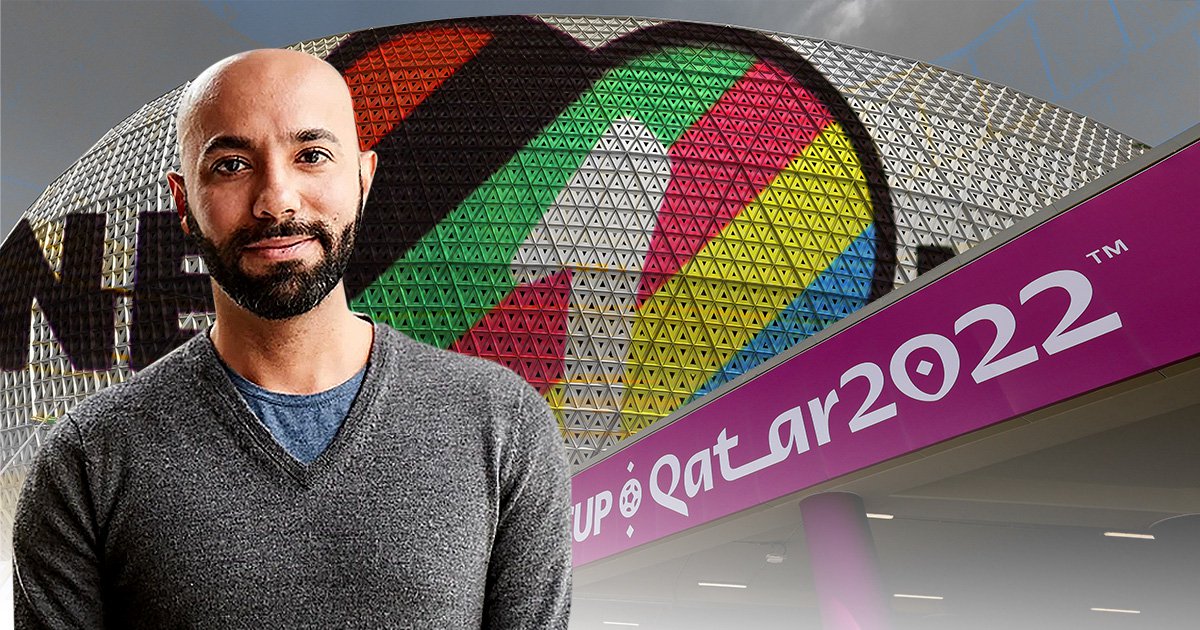 The only gay Qatari with a global profile has warned that the banning of rainbow armbands at the World Cup will have global repercussions for LGBTQ+ people facing hate and intolerance.

Dr Nas Mohamed reacted with dismay to the ‘dangerous and frightening’ move after England and Wales abandoned the show of solidarity in the face of possible yellow cards and suspensions from FIFA.

England captain Harry Kane had been expected to display the OneLove armband before the Three Lions’ clash with Iran yesterday.

However the England and Wales football associations, fearful of FIFA imposing sporting sanctions, decided to drop the show of solidarity.

Dr Nas, who now lives in the US, warned that the abandonment of the ‘simplest gesture of love and support’ would have worldwide repercussions for the LGBTQ+ community.

He told Metro.co.uk: ‘This issue is definitely global. We are all fighting the same mentality in different countries.

‘People are allowing it to happen on such a global scale in Qatar.

‘This is a hit against us everywhere.’

The associations have asked the captains not to wear the armbands, which feature the Pride colours and a striped heart, due to the sporting sanctions they could face from FIFA.

They said that world football’s governing body had been ‘very clear’ that it would take action which could include players being ‘booked or even forced to leave the field of play’.

The climbdown followed FIFA president Gianni Infantino making an indignant opening speech on Sunday in which he likened having ‘red hair and freckles’ to being gay, disabled or a migrant worker.

His words were a precursor to the body’s tough line on the armbands, which would have been a visible expression of tolerance and inclusion in a country where same-sex relations are illegal.

Dr Nas, 35, has previously described the oil-rich emirate as a ‘house of abused children’ in terms of its treatment of LGBTQ+ people.

Now living in California, the physician has received death threats and abusive messages on social media and accepts he will never return to Qatar.

He also referred to a gunman killing five people at an LGBTQ+ nightclub in Colorado Springs on Saturday night, at the same time as the World Cup was opening in Qatar.

‘I strongly believe that we, the global LGBT community, need to fight this together,’ Dr Nas said.

‘This is dangerous and frightening.

‘The president of FIFA gave an opening speech that was extremely dismissive. They followed that by taking away the simplest gesture of love and support. Sadly we had a shooting in a gay club in Colorado in the US on the first day of the FIFA World Cup as well.

‘Those that are silent globally on our rights in Qatar today have our blood on their hands when we are harmed anywhere.

‘Allowing hate speech against the LGBT community and allowing our rights to be taken away results in violence against us.’

Dr Nas, who runs Osra Medical practice in San Francisco, founded the Alwan Foundation, which aims to advance LGBTQ+ rights in the Middle East, with a focus on the Gulf region. He is also president of the Proud Maroons, Qatar’s first LGBTQ+ supporters’ club.

His messages of inclusion are increasingly at odds with events in Qatar, where Wales captain Gareth Bale also had to abandon the show of solidarity before the game against the USA yesterday.

The Netherlands, where the OneLove gesture began before Euro 2020, was another of the European teams which dropped the symbol.

Female Wales fans including the country’s former women’s football captain Laura McAllister were reportedly told by stewards to take off their rainbow bucket hats before the game at the Ahmad bin Ali Stadium.

And an American journalist said he was denied entry to the arena because he was wearing a T-shirt with an LGBTQ+ rainbow. Grant Wahl described being told by a security guard that the symbol was ‘not allowed’ before he was ‘detained for nearly half an hour’.

Two LGBTQ+ fans’ group, 3 Lions Pride and The Rainbow Wall, issued a joint statement saying they had ‘no trust’ in FIFA or the World Cup.

They said: ‘In seeking to censor European FAs and players by forcing them to abandon the OneLove armband aimed at tackling all forms of discrimination, FIFA are guilty of crushing the basic human rights to freedom of speech and of expression that every single one of us should have without question. In doing so, FIFA are also guilty of silencing anti-discrimination work within the game and of giving a platform to hatred.

‘This abuse of power by those who have chosen to remain silent for so long is a gross betrayal of trust and cannot be allowed to stand.

‘We have no faith in FIFA, no trust in this World Cup.’

FIFA has brought forward its own ‘No Discrimination’ campaign, allowing all 32 captains to wear a more muted armband ahead of its planned introduction at the quarter-finals.

The logo was worn by Kane, Bale and Netherlands’ skipper Virgil van Dijk during their sides’ opening games yesterday.

In a statement, the England and Wales football associations said: ‘Our players and coaches are disappointed – they are strong supporters of inclusion and will show support in other ways.’

FIFA did not directly explain its stance on rainbow armbands but reiterated the existing rules as it announced the No Discrimination move yesterday.

The governing body said: ‘FIFA is an inclusive organisation that wants to put football to the benefit of society by supporting good and legitimate causes, but it has to be done within the framework of the competition regulations which are known to everyone.’