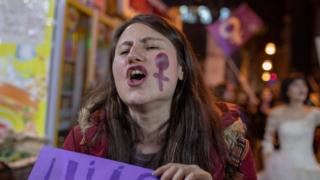 The killing of a mother by her ex-husband in front of her child has sent shockwaves across Turkey.

Emine Bulut, 38, was stabbed to death in a cafe on 18 August in Kirikkale.

Video posted to social media shows the mother screaming and holding her neck as her 10-year-old daughter begs her not to die.

According to “We Will Stop Femicide”, a women’s rights platform, 245 women have been killed in Turkey in the first seven months of 2019.

The mother brought her daughter to the cafe to meet her ex-husband Fedai Veran where he attacked her.

Testifying in court, Varan said: “After she insulted me while talking about the custody of our child, I stabbed her with the knife I brought along.”

He then got into a taxi and fled the scene. Ms Bulut later died in hospital.

In the video footage from the cafe, the mother can be heard screaming “I don’t want to die” as her daughter begs her to live.

Buliut’s name and her last words are being used on social media to help reignite a debate about women’s rights in the country.

The mayor of Istanbul wrote on his Twitter: “We lost Emine Bulut because of male violence. We stand by women and children in the fight against violence and we will continue to.”

A message from the Besiktas football team said: “We are not silent against this savage. We wish the killings of women to come to an end and the perpetrators will be tried with the most severe penalties. We won’t get used to it, we won’t shut up.”

Gulsum Kav, representative of We Will Stop Femicide, told the BBC: “The fact that her last cry was asking not to be killed is the symbol of how little, we as women, want. In Turkey, our demand, as women, is not to be killed.

“This was Emine’s last cry. And the fact that her child cried ‘Mum don’t die’… I don’t think anyone in the world can turn a blind eye to it whatever their world view.”

According to We Will Stop Femicide, 32 women were killed in July alone.

Ms Kav said that people in Turkey are beginning to become more aware that “there is a femicide problem”. Femicide is the killing of a female on account of her gender. She says this began with the murder and attempted rape of Ozgecan Aslan, a student, in 2015.

A report by Hecettepe University found that 36% of married or previously married women have been subjected to physical violence at least once in their life time.

“Since then more people have been joining the movement for women’s rights. Our fight for it has been spread to all parts of society. Women’s demands of not to be killed or subjected to violence has become a widespread social request,” Ms Kay said.