The distinctive timepiece – with the letters of the Spanish artist’s name replacing numbers or Roman numerals – had been expected to fetch £10,000-£15,000. But the hammer fell when bidding reached £188,418. Jonathan Darracott, auctioneer Bonhams’ global head of watches, said: “This was an extraordinary find and we are so thrilled at this well-deserved result for such a special timepiece, which was also a superb example of the 12-digit name tradition.” 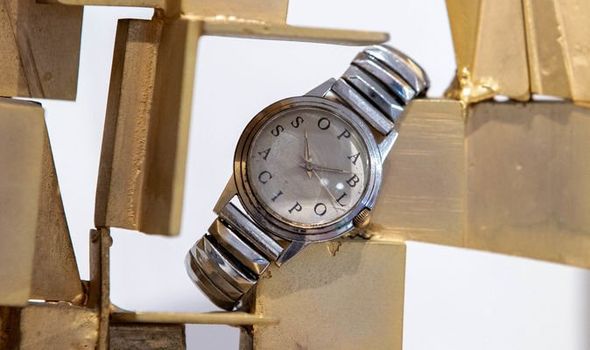 Picasso was often photographed wearing the steel bracelet wristwatch, made in about 1960 by Swiss manufacturer Michael Z Berger.

The prolific painter gave it to his friend, the late Greek sculptor Lela Kanellopoulou, as he was so taken by her beauty.

Lela, who Picasso called “La Belle Helene”, treasured it for the rest of her life. It was sold at Bonhams in Paris by her family.

The watch is one of only three the founder of the Cubist movement, who died in 1973 aged 91, is known to have owned with his name on the silvered dial.

Mr Darracott added: “I have had a chance to hold history in my hands and this has to be one that will make a lasting impression, the like of which I am unlikely to see again.”