A charity that cleans up beaches says the coronavirus pandemic has caused a new wave of plastic pollution.

Surfers Against Sewage says it has seen an “explosion” of discarded masks and plastics on beaches and in rivers.

The group claims businesses are using the pandemic to revert to using huge amounts of single-use plastic.

From September, it plans to name and shame on social media individual companies whose waste its members most regularly find. 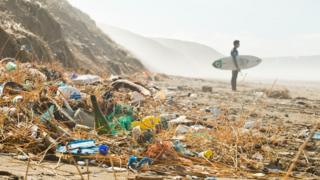 Jack Middleton from Cornwall-based Surfers Against Sewage said: “Since lockdown has started to be lifted we’ve witnessed a new wave of plastic pollution littering our beaches in the form of disposable masks and gloves.

“While the PPE has helped to save lives over the past few months, we now need to consider how we dispose of it properly to prevent it from flowing into our rivers and oceans and destroying our beaches.

“We’re used to seeing plastic bottles and bags when we’re surfing but this new type of plastic pollution is something that no-one could have foreseen.”

Mr Middleton encouraged people to use reusable face masks and said measures introduced to help businesses during lockdown were undermining the battle against plastic pollution.

“We have seen the government roll back on the progress we have made in tackling the plastic pollution crisis,” he said.

“The 5p plastic bag charge has been waived for food deliveries and the ban on straws, stirrers and cotton-bud sticks that was just weeks away from being introduced has been postponed.”

From 5 September to 18 October, Surfers Against Sewage will be launching a campaign called The Generation Sea: Plastic Protest aimed at encouraging grass-roots action across the UK.

As well as 600 beach and river cleans, the campaign will also involve highlighting the brands whose packaging is found most regularly.

Under a measure called Return to Offender, plastic items will be displayed on social media to name and shame the companies responsible for the products.

Charlotte England takes part in mass clean-ups in Bristol along the River Avon through the city centre.

The 32-year-old says she has noticed increasing amounts of PPE, particularly face masks, among the litter she cleans up.

“You see the masks everywhere, on parks and in the streets,” she said.

“This is a big problem because before lockdown these items weren’t ever really in circulation among the general public, they were limited to the medical industry.

“I think what’s needed is clear guidance from the government on the promotion of reusable masks.

“They have said they are safe to use but I don’t think the fact that they are an [environmentally friendly] alternative to the single-use masks has been widely communicated.”