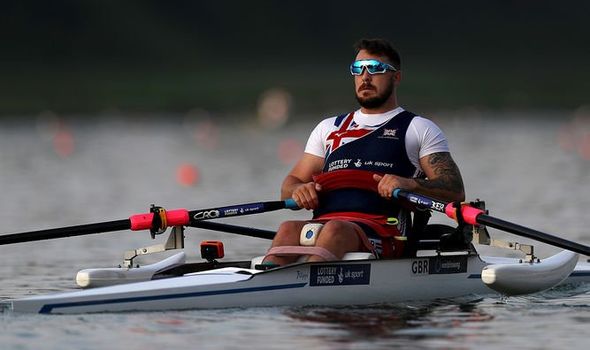 Sporting success is often determined in the blink of an eye, but so is the hunger to succeed. It’s what turned around the life of Paralympic rower Ben Pritchard, a former triathlete and cyclist who was paralysed from the waist down in a cycling crash five years ago.

He “hated” his first attempts at rowing during his post-accident rehabilitation in Stoke Mandeville hospital – until everything changed in an instant.

“I was told of a leaderboard of rowing times behind the physios’ door in the hospital,” the Welshman, 29, says. “As soon as I heard that I wanted to try and top it.”

Ben, who was progressing through the ranks of amateur cycling in time trials until his accident, spent three weeks training as hard as his injured body would allow.

“When I left the hospital I was third on the leaderboard -– but the two people above me could walk, so I’ll take it as a win,” he says.

Now Ben doubts he would be one of Team GB’s 220 para-athletes competing from tomorrow across 19 sports at Tokyo unless it was for that “pivotal moment”.

He missed out on a medal by one second in the 2019 World Championships in the PR1 men’s single sculls, but dogged determination saw him win silver at this year’s European Championships.

It was in September 2016 that his life changed forever after he hit the ground at full speed on a bend in a road race.

“I got onto my feet and I collapsed,” he says. “I thought it was a dead leg. I didn’t realise it was as serious as never being able to voluntarily move my legs ever again.”

In the ambulance, he texted a picture of himself pulling a funny face to his boss to let him know he wouldn’t make work the next day.

“My teammate came with me in the ambulance and I said to him, ‘Oh, don’t forget, we’ve got racing next weekend. Can you make sure my bike gets back to the house? It was only later on when the feeling in my legs drained away that I thought, ‘Oh no, this is pretty serious’.”

After a week and a half in hospital, Ben, then just 24 years old, was told he would never walk again – but he says it was at this point he learned to become “comfortable in who I am”.

“Having the accident was the worst and best thing that’s ever happened to me,” he says. “It took away my ability to do what I loved, which was riding my bike in the countryside and racing up to four times a week, but it’s given me a whole new life and confidence in myself. If it wasn’t for that, I probably wouldn’t be who I am now.”

Rower Ellen Buttrick, from Leeds, shares Ben’s positive mentality. A two-time world champion in the PR3 Mixed Coxed Four, Ellen, 26, is part of the hugely successful eight-strong GB para-rowing team that has won 50 percent of the gold medals awarded since the sport’s introduction in 2008.

“I’m hoping we will be champions and we’ll be disappointed if we get anything below that,” she says. “We’ve said as a crew that we’re going to win since day one.

Ellen has Stargardt disease, a degenerative disorder that blurs vision in the centre of the eye.

“I can’t see the person in front of me when I’m rowing but I can see the blades on the sides,” she explains.

She was 19 when she was diagnosed in 2014 after four opticians struggled to get her prescription right.

When doctors told her she was losing her sight, her first question was: “Does that mean I could row at the Paralympics?”

They were surprised, but Ellen says that “straight away” she focused on the positives. “I had watched the 2012 Games and said to family and friends, ‘That’s so cool, isn’t it’,” she recalls.

“If you have a disability then why wouldn’t you try and go to the Paralympics?”

She was inspired to start rowing after watching Helen Glover and Heather Stanning win gold in the women’s coxless pair in London. She was encouraged even more when she discovered that Helen had only rowed for four years.

Ellen selected her university — Northumbria — mainly for its rowing credentials. But initially she didn’t reveal her diagnosis to her university rowing teammates.

“It meant I kept getting put in single sculls in the river Tyne,” she says. When she was ready to talk openly about her condition she attended a Para-rowing Talent ID day in August 2017 but nearly bungled it after instructors asked her to do a press-up and she couldn’t.

“They said, ‘Come on, you can do a press-up – get down and do one. I just fell to the floor and they realised I really couldn’t do one,” Ellen laughs.

She fared even worse attempting a pull-up and mild panic set in. “I’m losing, I’m not getting through,” she thought.

Thankfully, she was a whizz on the rowing machine, and won her first world championship 12 months later.

The two-time gold medallist at the 2017 World Para Athletics Championship didn’t have the strength to hoist her body into her racing chair the first few times she tried.

She recalls: “I watched everyone else and wondered how they got their legs in it. I fell out a lot — and I mean a lot — trying to get in it,” she says. “The first time I succeeded, I sat up and fell backwards.”

Sammi was 14 when she lost the use of her legs while playing with a friend on her family farm in the Borders. She had climbed onto her father’s forklift truck and was crushed as he lowered the beam, unaware she was beneath it.

“There was a genuine moment where I was pretty certain I was going to die,” she recalls. “I can remember closing my eyes, and thinking, ‘You idiot’. I was so angry with myself.”

Incredibly, her first thought, before feeling pain or fear, was guilt for her father Neill. “I thought I’m going to take away two of the most precious things in his life – his job and me. It was an incredible amount of guilt and I was only 14,” she says.

She spent the next six months recovering in a spinal injury unit in Glasgow hospital, where she befriended other patients.

“I met people who were paralysed from the neck down and started thinking, ‘I am really lucky’. I realised I could get upset every night and be sad about what had happened but if I woke up tomorrow and was still paralysed then what was the point?”

She is thankful to her dad and mum, Elaine, who have supported her wheelchair racing ambitions.

“My mum genuinely hates sports but will watch me for hours, that’s how passionate she is about whatever I do,” she says. As for her dad, who has had to live with the trauma of that accident, a win would make him “ecstatic”, she says.

Sammi is trying to keep her excitement about competing in check. “I’d love to win a medal, and any colour medal – I’m not picky,” she laughs.

Family and friends are central to all three at three athletes’ lives. Ellen, who trains six days a week, has seen her family once this year in April because of the pandemic.

“As the country opened up, we closed down because we didn’t want to get infected or jeopardise our games,” she says. “We’ve not seen anyone else.”

She plans to fly to Leeds for a big family reunion the day she returns from Tokyo. Before she moved down south to train full-time, she worked for the Refugee Council helping Syrians to resettle in Yorkshire.

If you have a disability then why wouldn’t you try and go to the Paralympics?

She is an assistant Brownie leader and credits the guiding movement for giving her confidence from the moment she joined at the age of seven.

“Girlguiding has taught me to overcome challenges, to have self-belief and determination,” says Ellen. “I believed I could be on the GB rowing team when I had barely taken any strokes.”

Ben is close to his parents and two brothers, who will be watching at home in Mumbles, West Swansea. His brothers are playing together in a local rugby sevens tournament for the first time and it falls on the final day of Ben’s event.

“They’ve said, ‘You’d best do well so we can get back to bed quickly to wake up and go to the tournament’.

“I thought, ‘Thanks for comparing a Paralympic final to some rugby tournament!'”

Now, the Paralympians face the last-minute adjustments and butterflies before their events.

Sammi was sick with nerves before every race at the Rio games in 2016. “I’d love to say that I’m not sick anymore, but I still am,” she says.

She has adapted to it like all the other challenges she has faced. “Without the adrenaline and nerves, I wouldn’t be as fast or care as much and it’s not in my nature to be that way,” she says.

Ben wants to enjoy his Paralympics debut as “it’s the one time where you can perform freely and enjoy it before the pressure and expectation starts to build”.

He was due to marry his fiancee, Megan Lowri Jones, ten days after the Paralympics finished but their wedding venue has been turned into a vaccination centre.

“The only thing I haven’t ticked off is the family life but I’m sure that will come in the years after we marry and get settled down,” he says. “I’m proud of what I’ve achieved and hope this is only the beginning.”