The 14-year-old victim needed to go to hospital for concussion after the youths behaved like “feral rats” in the unprovoked beating. The group, who had reportedly been drinking, kicked and punched the teenager, reports Liverpool Echo.

It’s also alleged the thugs poured vodka on the girl’s head and face on Crosby beach in Merseyside on Wednesday afternoon.

Police are now investigating the assault, which was filmed and quickly shared on social media.

A relative of the victim, who is from nearby Bootle, Merseyside, said: “She went to Crosby beach with a couple of friends and was then attacked by a group of girls and boys. She was punched and kicked during the attack.

“The group that attacked her had been drinking spirits. They poured vodka on her head and face.

“Some of them filmed the attack on their phones and posted it on social media last night.” 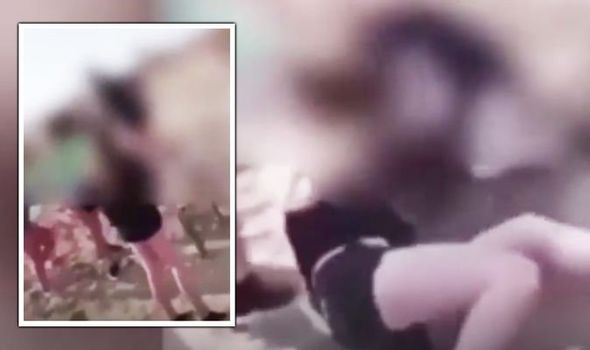 The group that attacked her had been drinking spirits. They poured vodka on her head and face

“I took her to Alder Hey after the attack where she was treated for concussion. We think she was knocked out.

“She was discharged during the early hours of the morning. We were told to keep an eye on her.

“The attack was unprovoked and we have reported it to police.”

Hundreds of people – including many parents – have shared their fury at the attack after watching footage online.

One woman posted: “Absolutely disgusting behaviour makes me feel sick to the stomach. I hope their parents see this video and I hope they get what’s coming to them. Hope the girl is OK, scary.”

Another wrote: “This makes my blood boil. Absolute cowards. I hope the young girl is okay. Sending love to her and her family.”

One Facebook user said: “Vile creatures think they’re all big in their gangs, they wouldn’t do or say anything if there was only one or two of them, always need an audience. Hope that poor girl is okay.”

Another posted: “What’s wrong with kids? They’re literally acting like feral rats and they get away with it. Hope the girl recovers well.”

One woman shared: “Let’s hope the parents see this and make sure their children are punished, hopefully the police will get to them too. Disgusting.”

Another parent said: “I cant watch or read as it will break my heart. What is wrong with teens these days?”

A spokesman for Merseyside Police said: “We can confirm that officers are investigating following an assault on Crosby beach reported yesterday, Wednesday 31 March.

“At around 3.30pm, we received a report of a teenage girl being assaulted and receiving a head injury. She was later taken to hospital as a precaution.

“If you witnessed this incident or were passing and captured anything else on any devices, please contact us on @MerPolCC on Twitter, ‘Merseyside Police Contact Centre’ on Facebook or anonymously via Crimestoppers on 0800 555 111, with reference 21000206256. “