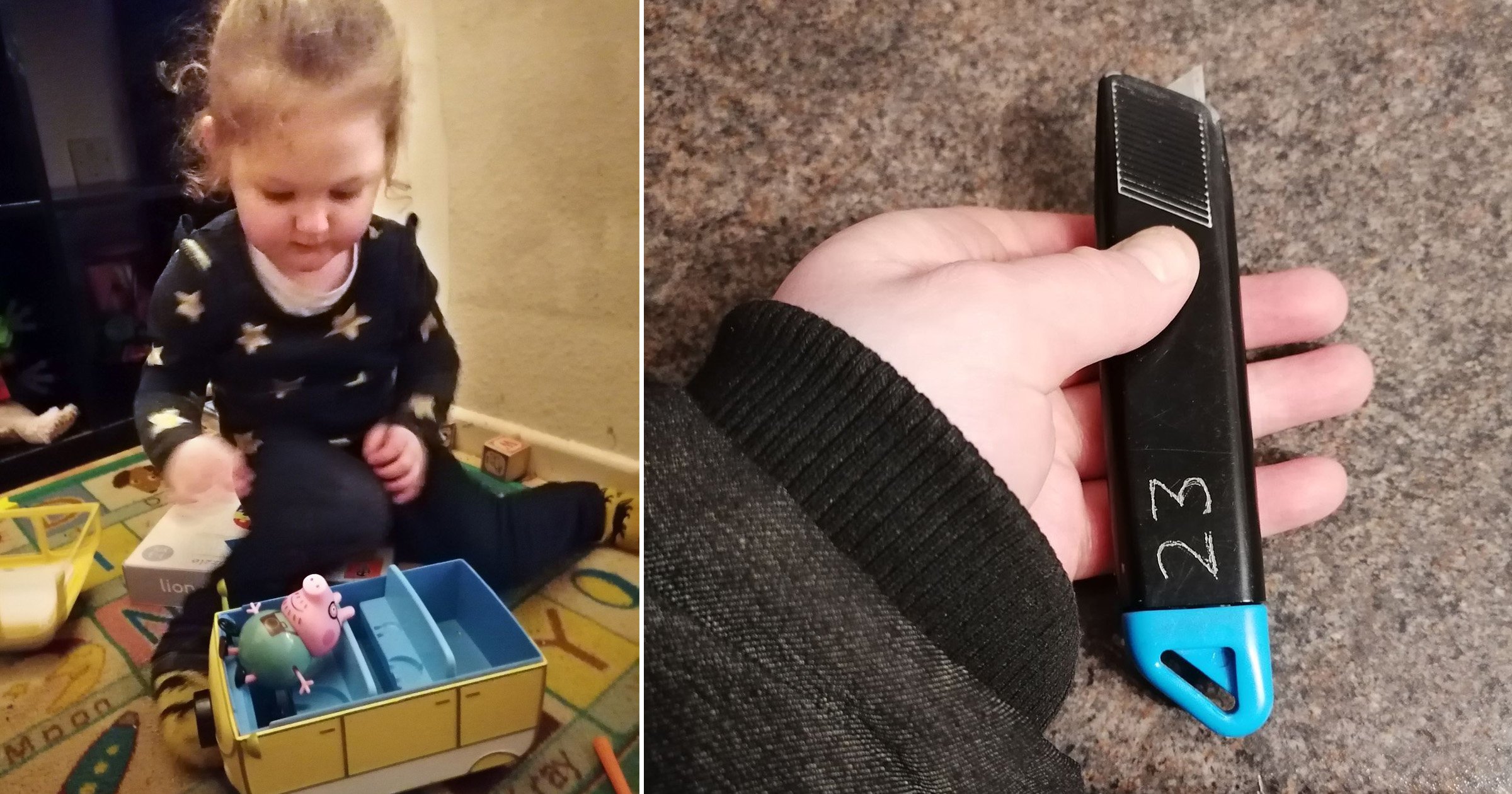 A family were left horrified after a rusty knife fell from the box containing a brand new Pepper Pig gift.

Martin Sexton, 36, and fiancé Kelly Francis, 31, had been enjoying Christmas with daughter Maggie, 2, and son Archie, 3, at their home in Brackley, Northamptonshire.

But unwrapping presents took a shocking turn when the toddler turned to a yellow Pepper Pig-themed campervan toy.

The family claim a rusty retractable knife fell from the box.

Dad Martin says he just managed to grab the sharp object before Maggie placed it in her mouth.

‘It could have been horrific,’ he fumed.

‘As both our children are autistic, we have to be particularly vigilant when opening boxes that contain plastic ties. Parents with more developed children might have just let them get on with opening their own presents.

‘When something fell out from a void in the cardboard packaging, initially I thought it was just a plastic component.

‘As Maggie reached for it, I saw it was a blue knife. The blade was rusty and the retractable blade didn’t have a safety catch, so it could just slide in and out.

‘I managed to grab it just before Maggie did. It was just as well I did, as it’s pretty likely Maggie would have put it in her mouth.’

Sharing photos of the knife on Facebook, Kelly said the incident had left her ‘absolutely fuming’.

She wrote online: ‘So lucky and thankful Martin opened it with her and found it first!’

After re-checking their receipts, the couple confirmed they had ordered the gift from Studio, an online retailer that’s owned by the Studio Retail Group.

The complaint surrounding the incident has been passed to the company’s investigation team.

The wooden Peppa Pig campervan was manufactured in China and Martin suspects the blue Martor knife was accidently lost when the item was being packaged.

Though shaken, both parents were determined the incident wouldn’t spoil Christmas for their young children. They continued to open their children’s presents – albeit very carefully.

Martin added: ‘We have played through the various horrible what-if-we-hadn’t-seen-it-when-we-did scenarios.

‘What if our other child had picked it up? What if the dirty work blade had cut someone, particularly with so many emergency services currently on strike? But the prevailing feeling is a sense of relief that nobody got hurt.’

Digital retailer Studio was approached for a comment by Metro.co.uk.