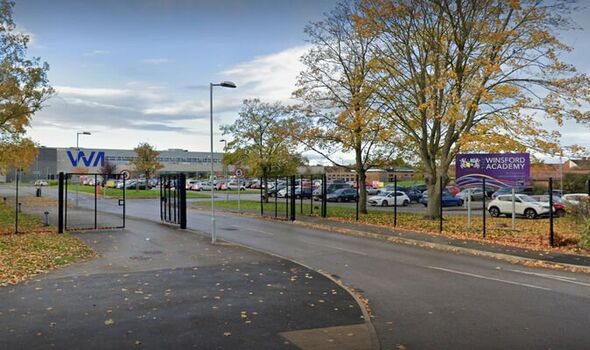 Eighty students have reportedly been barred from attending the end-of-year prom at Winsford Academy on June 30. An email sent to parents said that their children – who are currently sitting their GCSE exams – had not met the school’s “criteria to attend”. The school stood by its decision in a statement.

It explained that students had been monitored based on attendance and punctuality figures, as well as their exhibiting “positive attitudes to learning”.

However, some parents argued their children had to take time off for medical conditions, which they suggested had not been accounted for, as well as Covid absence.

According to CheshireLive, which first reported the claims, there are around 200 students per year – meaning around 40 percent of the school’s Year 11 students will not be able to attend.

Danielle Sendall, mother of Tyler Knight, was stunned to find out that her son would not be allowed to attend the prom while he was preparing for his exams.

She said: “They’re sitting their exams at the minute and we all got an email saying whether your child would be going to the prom or not, which came as a shock to a lot of parents to be honest.

“Tyler had time off due to injury as he suffers with a condition with his kneecap. Unfortunately for him that’s not his fault.

“Then he also had pneumonia so he was off for a good couple of weeks with that. And then, of course, the children have not been in school because of Covid too.

“I’ve spoken to quite a lot of parents who have said: ‘My daughter can’t go because she’s missed days and she’s had a few lates’.

“Many parents will be paying on a monthly basis for the dresses.”

Ms Sendall said she had been “excited” for her son as “they’ve had nothing for two years” due to the pandemic.

Meanwhile, Casey Wakefield’s mother Julie accused school staff of shouting at her daughter about her uniform.

She said: “We only found out on May 18 that she’s been excluded and with that she can’t go to the prom.

“I went in for a meeting as she’s been struggling to deal with her uniform. She went in with socks on instead of tights and she’s been shouted at for not wearing the correct uniform.

“It was quite harsh. I went in and said: ‘You can’t shout at children who are just walking into doing GCSEs’.”

In spite of the punitive prom prohibition, parents of children excluded from the event are not letting their children finish the school year without celebrating their hard work.

They have reportedly arranged an alternative prom at a bar in Winsford, clubbing together to provide a disco, buffet, goodie bags and a flower wall.

In a statement provided by the Fallibroome Trust, a multi-academy trust that runs ten schools across Cheshire, the school’s headteacher Gary Evans said: “The school leadership and staff at The Winsford Academy work hard to set and maintain the highest standards across the school.”

He claimed it is “common practice in many schools for students to have to meet certain standards to be able to attend the annual prom and other school events.”

“This was presented to Year 11 in school assemblies and has been communicated to parents through our weekly newsletter for several months.

“Parents have received two updates via a letter since February half term to let them know if their child was meeting the standards.

“Staff have also had regular conversations in school with students who were at risk of not meeting the standards. It was made clear to students and parents that the final decision would be made in May to give students as much chance as possible to meet the standards.

“The large majority of students in Year 11 met these standards consistently over the last few months and have been invited to the prom.”