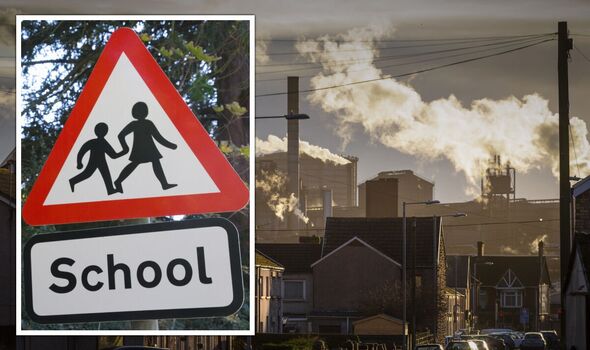 Jemima Hartshorn, co-founder of Mums For Lungs, says it shows how people are increasingly aware of the impact of filthy air.

She said: “We know of people who’ve turned down placements. It’s something people are thinking about when they apply for places.

“We hear from more parents wanting advice and being concerned and saying friends are concerned.

“It is an issue that’s rising up the agenda.”

At least 88 per cent of schools are in areas breaching new World Health Organisation (WHO) limits for the gaseous pollutant nitrogen dioxide, figures from Global Action Plan (Gap) show.

This rises to 99 per cent of UK schools exceeding WHO guidelines for deadly PM2.5 particles – tiny particles from burning fossil fuels.

Marcella Madden, deputy head at Loughborough Primary School in Lambeth, south London, said air pollution levels near schools would increasingly be a deciding factor. She told how dirty air has “absolutely” worsened some children’s asthma at her school.

Ms Madden said: “We have a warning that comes through Lambeth [Council] to make us aware air quality might not be so good, especially in the ­summer months. And you notice an increase in the number of children using asthma pumps during those times.”

The risks of filthy air were laid bare when nine-year-old Ella Adoo-Kissi-Debrah was the first person to have air pollution listed as a cause of death in 2021.

She died from an asthma attack in 2013 and her mum Rosamund is campaigning for the Clean Air (Human Rights) Bill or “Ella’s law”.

Sarah Woolnough of Asthma + Lung UK said: “Childhood is a vital window of opportunity for healthy lungs and exposure to toxic air when lungs are still developing can set someone up for a lifetime of poor health.”

‘Friends moved due to dirty air’

Architect Ben Paul has told how he “still feels guilty” for keeping his son at a school surrounded by unsafe levels of dirty air.

The father, 55, considered moving Isaac, 13, elsewhere when he was around five.

Ben explained: “It was a really difficult one because campaigning friends of ours did move. We decided not to, ultimately, for financial reasons.

Ben, of Camden, London, added: “We’re pretty fit [but] if I or my wife develop dementia, COPD, dementia or asthma, is that going to be because of air pollution?

“There are times I feel I want to scream outside Parliament: ‘Why aren’t we doing something about it?’”