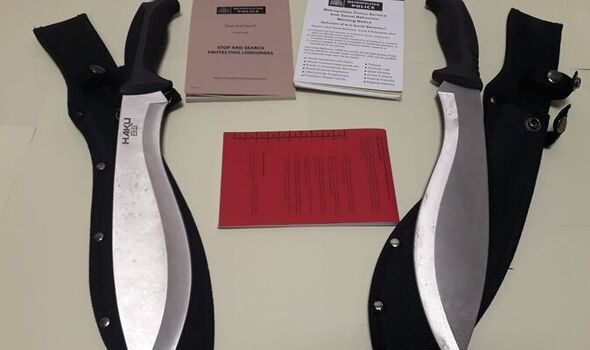 The officers, in Hackney, East London, were abused and shouted at by two passers-by who accused them of harassment on Friday night. During the search, the Homerton Policing Team found two sheathed blades, each about 30cm long. They issued a photo of the weapons and wrote on Twitter to explain why their actions were necessary.

The officers wrote: “To the two members of the public who tried to obstruct us whilst we were dealing with a group of youths in Retreat Place E9 tonight, shouting at us & accusing us of harassing the youths, if you tried to listen to us we may have been able to show you what we found.”

Earlier that evening, the policing team had also used the social media site to explain that officers were out in force in the area carrying out high visibility reassurance patrols, intelligence lead weapon sweeps and block sweeps.

The aim of the operation was to deter crime and fireworks linked anti-social behaviour.

The incident comes after data revealed that a total of 6.5 million crimes were recorded in the 12 months to June 2022, up from the previous all-time high of 6.3 million in the year to March.

And Home Office figures published in July revealed that in the year to March, just 5.2 percent of violent offences resulted in a suspect being charged.

And more than 40 percent of victims of violence give up on justice by refusing to support the prosecution, it was said.

In London, which accounts for between a fifth and a quarter of all knife crime, just one in six offences involving a knife has been solved over the past two years.

London Mayor Sadiq Khan has been tasked by ex-Chief Constable Stuart Hyde to announce a plan for protecting Londoners amid forecasts of a winter crime wave in the capital.

Fears of a sharp rise in criminality on the back of the cost-of-living crisis have seen the Labour mayor come under increasing pressure to act.

Mr Hyde told LBC: “We need much more investment in the ability of police officers to use forensics, digital forensics, and to get people on our side.

“How is the relationship between the new Home Secretary and the Mayor are going to improve to ensure that the policing of London is both accountable, and I agree with that, but also effective, they’ve got to work together and there’s no sign that they’re doing that at the moment.”

Detective Chief Inspector Yasmin Lalani told the Daily Telegraph: “I understand that there is a lot we need to do to rebuild the trust of our communities and it can be alarming to a passer-by to see officers exercising some of their lawful powers.