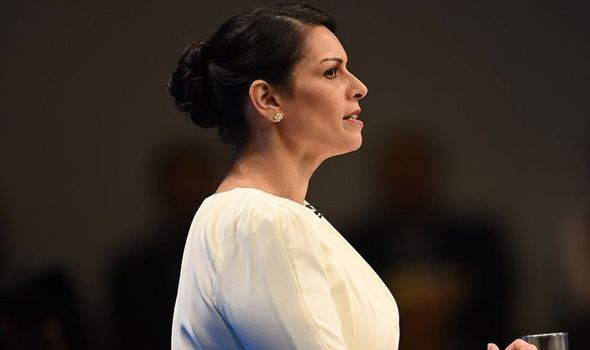 A spokesman for Ms Patel said “The Home Secretary has asked all police forces to review security arrangements for MPs with immediate effect and will provide updates in due course.”

MPs have also been told to step up their protection after Tory Sir David, 69, was fatally stabbed at a surgery in his Southend West constituency.

Describing Sir David as a “loyal friend”, Ms Patel tweeted: “Questions are rightly being asked about the safety of our country’s elected representatives.

“David served the people of Southend with endless passion, energy and integrity. That he was killed while going about his constituency duties is heartbreaking beyond words.

“It represents a senseless attack on democracy itself.”

After holding his constituency surgery, Sir Lindsay said last night: “We cannot afford for democracy to be smashed. The people who do not accept our values will not win.”

Asked whether yesterday’s killing highlighted a problem with the security of MPs, Prime Minister Boris Johnson said: “I think what we need to do now is let the police get on with the investigation.

“I am sure that all those issues will be considered in the proper time but I think this is a moment for us to think of Sir David, his wife, his family. Our thoughts are very much with them.”

The attack has shown how extremely vulnerable MPs can be when they meet the public at advertised surgeries.

House of Commons deputy speaker Dame Eleanor Lang said: “All elected representatives must be able to go about their work without the fear of physical or verbal attacks.

“What has happened to Sir David Amess in Essex today is unforgivable.”

Former Tory MP Harvey Proctor said: “It’s now time to consider again the security of MPs, especially when they are present at fixed events and times such as constituency surgeries.

“Our parliamentary democracy is under threat and Parliament must respond.” The Archbishop of Canterbury, Justin Welby, said: “Our elected representatives must be able to live and work without fear of violence or intimidation if we are to maintain our democracy.”

Ms Cox was murdered in the street as she went to a constituency meeting.

At the time, there were calls for better security, although MPs were reluctant to take any measures which put “barriers” between them and the people they represent.

But in the wake of yesterday’s tragedy in Leigh-on-Sea, MPs will be forced to rethink their personal protection at their homes, offices, constituency meetings and on the campaign trail.

A source said: “The MPs will not like it but they will all have to have a long, hard look at their security arrangements and ask themselves, ‘Am I, my family and my staff as safe as I can make it?’.

“Sadly, in the overwhelming majority of cases, the answer is likely to be, ‘No’. These are dangerous times and MPs will have to move with them.”

The Parliamentary Liaison and Investigation Team, set up by the Metropolitan Police in 2016 after Ms Cox’s death, received 582 reports of malicious communications and handled 46 cases of harassment. Nine cases were classified as terrorism-related.

There were also seven reports of MPs receiving threats and three cases of common assault.

Separate figures, released under the Freedom of Information Act, show a sharp rise in reports since 2018. There were 34 incidents that December and 128 in January 2019.

There were also three threats to kill in the four months for which figures were provided.

At the time, Met commissioner Dame Cressida Dick said: “The current context, in our policing time at least, is unprecedented.”

Dan Norris, Bristol’s metro mayor and a former Labour MP for Wansdyke, Avon, called on politicians to change the way they work.

He said: “I had experiences of violence as a Member of Parliament. It’s a modern part of the job for some of us. But too many politicians have now been attacked or killed.

“Politicians are often reluctant to make changes that will make them safer because they want to be available to the public. Unfortunately that makes them vulnerable.”

He added: “I think it will have to happen now or more instances like this will occur.”

Mr Norris said of Sir David: “This was just a man doing his job. And his family and friends will have to bear the scars of what happened to him.”

Labour MP Stephen Timms survived a similar attack when he was stabbed twice in the stomach by a young woman at a constituency surgery in Beckton, east London, in 2010.

His attacker had taken two knives into the meeting, both of which would have been detected if she had gone through an airport-style security scanner.

Measures such as knife arches, bag searches, security guards and stab-proof vests and scanners are an anathema to politicians, particularly around election times. But security experts say politicians must now accept they are all at risk from terrorists and lone wolf fanatics.

One specialist said: “There were days when any member of the public could stroll along Downing Street and pose for pictures outside Number 10.

“The doors of the Palace of Westminster were open to all and voters could walk into the lobby of the House of Commons and buttonhole their MP.

“Those days are long gone. Westminster is guarded day and night by police officers with submachine guns, people have their bags checked and have to wear passes while inside the building.

“There are similar arrangements at party conferences, but not in constituencies.

“MPs and their staff are so very vulnerable.”