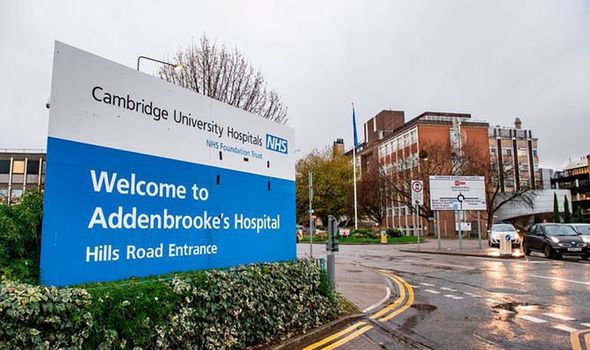 Paramedics rushed the patient with a “serious medical condition” to A&E on Sunday at around 10pm. However, the patient remained in the vehicle after the team arrived at Addenbrooke’s Hospital in Cambridge because it was an “extremely busy night”.

A registered nurse assessed the patient but their condition deteriorated, and just before 11pm they died after a cardiac arrest.

The hospital has now launched an investigation following the death but said it had experienced “significant pressures” on Sunday evening.

No further details, including gender and age, have been shared about the patient at this stage.

An East of England Ambulance Service spokesperson said: “Shortly after 8pm on Sunday (Oct 24) we were called to an address in Cambridge following reports of a patient with a serious medical condition.

“Our crews assessed the patient at the scene before transporting the patient to Addenbrooke’s Hospital.

“Sadly, the patient’s condition deteriorated while being transferred from the ambulance to the hospital and the patient died.

“The Trust has begun an inquiry to see if any lessons can be learned from this incident.

“We would like to extend our deepest sympathies to the patient’s family and would invite them to contact us directly to discuss the case.”

A Cambridge University Hospitals NHS Trust spokesperson said: “During an extremely busy night in our Emergency Department, a patient was brought to Addenbrooke’s by ambulance with chest pains.

“They were assessed by a registered nurse on arrival and remained in the ambulance, due to significant pressures on A&E, where they were monitored by paramedics.

“Our Emergency Department staff supported the paramedics when the patient’s condition deteriorated, but sadly they died following a cardiac arrest.

“An investigation has now been launched by CUH and our thoughts are with the family at this very difficult time.”