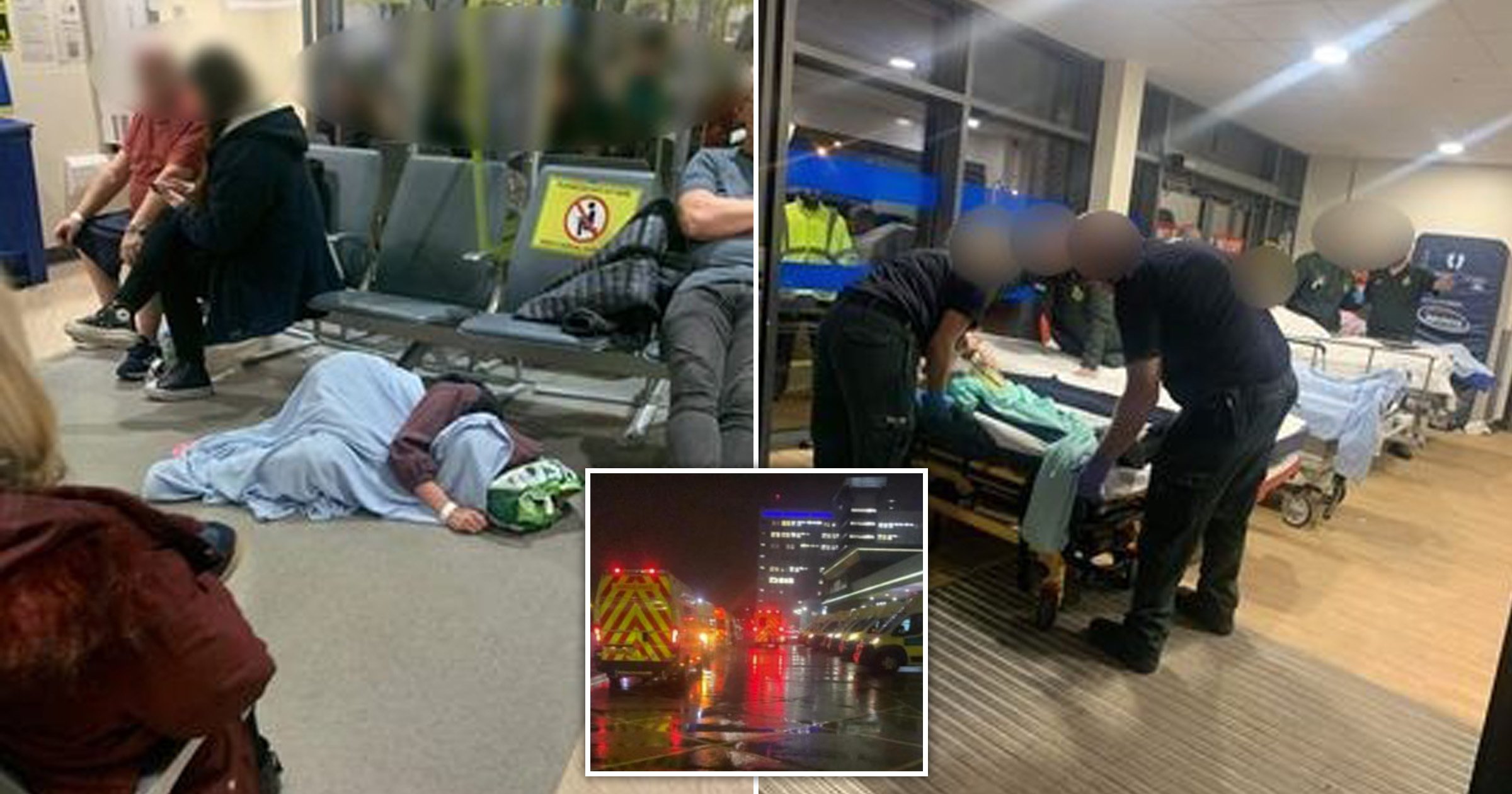 Patients have been left lying on the floor in pain at A&E waiting rooms as they are forced to wait for up to two days for a bed.

NHS Trusts in Merseyside have told patients not to attend A&E unless their condition is ‘life-threatening’, with hospitals facing extreme demand this winter.

Eyewitnesses have painted a bleak picture of the health service, saying doctors have been forced to treat people in corridors and in the back of ambulances while surrounded by other patients.

A patient at Royal Liverpool Hospital told the Echo: ‘There was a woman in the waiting room who was vomiting into bowls, but there were no staff around to help her so other members of the public were helping her to clear it up.

‘We were told by a staff member that there was a 30-hour wait for a bed. He had a big three-page list of all the people who were waiting for a bed.’

Elsewhere at the hospital, reports have circulated claiming a man was forced to wait for over 24 hours for a bed after suffering from a stroke.

An elderly man also had to wait on a trolley in a corridor for over 30 hours before he was able to be seen, it’s claimed.

Meanwhile, at the nearby Aintree Hospital, a fleet of around 15 ambulances could be seen queuing outside the entrance to the emergency department earlier this week, waiting to offload more patients in need of treatment.

One source said: ‘People were waiting up to 21 hours just to be seen and there were people lying on the floor, some because they were in that much pain.

‘People were then squeezed into rooms on drips and left. I have never seen anything like that.’

They said it was ‘soul-destroying’ to see staff placed under so much stress, and felt great sympathy for the nurses trying their hardest to do their jobs in such difficult circumstances.

At Arrowe Park Hospital in the Wirral, a clinical support worker explained the sheer scale of the problem, saying: ‘We are just completely overwhelmed.’

They continued: ‘The A&E has capacity for around 60 patients and we are getting 150 now at any one time. There are four or five corridors with trolleys full of patients because there are no beds, it’s just crazy, I have never seen it like this.

‘We have patients having heart attacks who we don’t have trolleys or beds for, so they are sat waiting in chairs. We are having to ration care, having to decide who gets the next trolley with 20-30 people waiting for it.’

The worker added that, although the system typically had a few rough weeks over winter, the scale of the crisis meant departments were starting to become overwhelmed all year round.

The dire situation has also led many healthcare professionals to quit their jobs after years of service.

In an attempt to manage the problem, hospitals throughout the country have declared ‘critical incidents’ in recent days, which allows them to take steps such as seeking aid from other services, diverting patients to nearby hospitals and deploying more staff to the front line.

Critical incidents are seldom used and typically only reserved for major incidents, but trusts have been forced to activate them for numerous days in a row in order to keep up with demand.

A Wirral University Teaching Hospital spokesperson said: ‘As is being experienced nationally we are currently seeing unprecedented demand in the number of patients attending our Emergency Department.

‘Staff are working tirelessly to provide the highest standards of care and ensure our sickest patients are seen first. While the safety of patients in the Emergency Department remains a top priority, we do have many patients who no longer need to be in hospital but who require ongoing community support.

‘We are working extremely hard with regional teams, partner organisations and North West Ambulance Service (NWAS) to facilitate the safe transfer of patients in and timely discharge of patients out of our hospitals.

‘Staff health and wellbeing remains a top priority especially during times of high demand for our services.

‘The Trust has a lot of support in place for staff such as counselling, health and wellbeing areas, Freedom to Speak Up Guardians, and pastoral teams to support staff with any concerns they may have.

‘While we do have robust plans in place to ensure the Trust can deliver all essential services during winter, we would ask patients to only attend the Emergency Department if it is an emergency.

‘If it is not an emergency, there are other more appropriate alternatives such as contacting 111 for advice, visiting a pharmacy or speaking to a GP.’