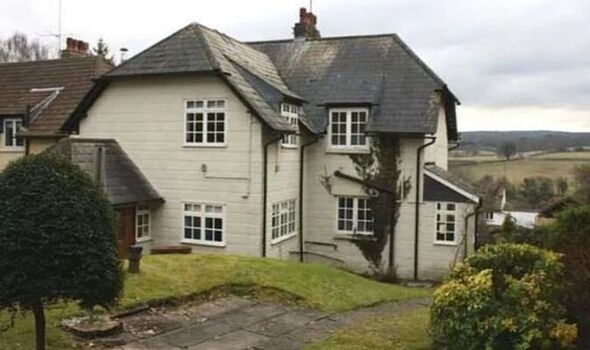 A pensioner is locked in a bitter court fight after being accused by a multimillionaire couple of setting fire to their garden fence and abusing their guests. Property tycoon Mark Randolph Dyer and his wife Clare are suing David Baker and accusing him of “25 years’ harassment”. They have alleged the fence between the gardens of their homes in Surrey was set alight in June 2021. Mr and Mrs Dyer, whose £2.6million house has a swimming pool, tennis court and at one stage, its own helipad, have obtained an interim injunction against their 79-year-old neighbour.

They want a permanent injunction against the pensioner and have asked a judge to find their neighbour in contempt of court, which can carry a jail sentence. But Mr Baker has “strenuously denied” the accusation of setting the fence on fire and is fighting the claim.

Mr and Mrs Dyer, both aged 64, moved into their home multi-million-pound home in 1997 and, since then, have made 37 planning applications relating to that home and a large field at the back of their garden, which they also own.

But neighbours have not taken too kindly to the huge number of applications, and some have been turned down following objections. A decade later in 1997, the couple were found to have made a ‘permanent helipad’ in the field but were ordered by the local council to remove it via an enforcement notice.

In the High Court this week, Matthew Hayes, who is representing the couple, told Mrs Justice Hill after a “period of calm” spanning several years, issues between the neighbours took a massive turn when their fence caught fire in June 2021.

Days later, at the High Court, Judge Mark Gargan granted Mr and Mrs Dyer an interim injunction stopping Mr Baker from storing “explosive or combustible materials” within three meters of the fence between their properties as the court looked further at the evidence.

But Mr Haynes wants the pensioner to be found in contempt of court nd face a possible jail term for allegedly breaching the interim injunction,and told the High Court: “The parties are neighbours. This contempt application is made against a background of 25 years’ harassment by Mr Baker of Mr and Mrs Dyer, ever since they moved into their house in 1997.

“Historical issues have related to the poisoning of dogs and trees, malicious letters and phone calls, abuse to visitors arriving by helicopter [and] rubbish such as tyres and Tango can[s] put in the field.

“After a period of calm from 2012, matters culminated on June 6, 2021, when Mr Baker deliberately set fire to the boundary fence between the parties’ properties – and it was only fortuitous that Mrs Dyer was present to take steps to extinguish it.”

But Lina Mattsson,representing Mr Baker, branded the claims “false allegations” and that the facts of the matter are still due to be decided at a county court trial. Mr Haynes claimed there is “a video of the fire showing Mrs Dyer having to deal with it”, adding: “This came against a background of a history of many incidents over a period of 25 years.”

He told the court Mr and Mrs Dyer have pictures and video showing ‘combustible or explosive materials’ stored within three metres of the fence by Mr Baker – despite the fact a temporary injunction had already been issued.

The barrister continued: “Here one has the ingredients for a bonfire: a number of petrol canisters, a bundle of tied lengths of wood, bags containing wood chippings and, just for kindling, you can see a bundle of twigs. It’s perfectly clear that there are combustible materials here”, before adding the pictures also show a “pile of tyres” near the fence.

Mr Haynes said: “In the context of such a serious incident of a fence burning down, it does amount to harassment. It is provocative, if not downright dangerous.

DON’T MISS
Mum left in tears after no one turns up to her daughter’s birthday [REPORT]
‘Outrageous’ Scotland to lose 2 MPs but England gains 10 [LATEST]
Woman, 34, found out she had stroke after husband spotted serious sign [COMMENTS]

“Mrs Dyer has been extremely distressed by events and is fearful of leaving her house. Mr Dyer simply seeks to achieve safety and uphold the court order.It is submitted that the breach has been established beyond all reasonable doubt. Mr Baker knew of the terms of the order. As set out above, he acted, or failed to act, in a manner which involved a breach of the order.”

But Ms Mattsson, for Mr Baker, told the judge her client Mr Baker denies breaching the injunction or doing any of the things his neighbours have alleged. She said: “The claimants’ conduct is outside the norm, it has been utterly unreasonable,’

“It is the defendant’s case that the claimants have over the years made various false allegations against both him and his neighbours and used the threat of litigation and ‘substantial’ costs orders as a means of intimidation to stop the neighbours objecting to the claimants’ various planning applications/breach of planning law.

“In June 2021, after almost a decade without any contact between the parties, the claimants issued these proceedings alleging that the defendant had set fire to the wooden fence separating the parties’ properties.

“Mr Baker strenuously denies doing this and there is not a shred of evidence to support the allegation which appears to be based on pure conjecture. It is Mr Baker’s case that the historic claims against him are untrue and spurious.”

Ms Mattsson also told the judge that at the time the interim injunction was made, Mr Baker lacked lawyers and didn’t attend court or oppose its making.

She continued: “Save for Mr Dyer’s assertion that a bag of wood chips is combustible, no items have been identified by the claimant as combustible or explosive. Wood cannot be considered combustible when the fence itself is made of wood.”

Ms Mattsson told the judge Mr Baker has made an “offer to move any item identified” and also asked the judge to adjourn the contempt hearing until the main county court trial, at which the Dyers are seeking a permanent injunction over their fence claims.

The pensioner had not attended court because he has health issues and needs to have time to be medically assessed before the full trial.

The judge agreed to the application from Ms Mattsson and ordered the Dyers to pay the £6,750 costs of the hearing. The couple’s lawyers said their own costs for the hearing were around £20,000.