An unruly pensioner was dragged off a plane after allegedly hitting an air steward because he took her gin and tonic away from her.

The woman, who appears to be in her 70s, was hauled off by police to rounds of applause from other passengers who shouted ‘auf Wiedersehen, pet’.

Because of the alleged assault, the Jet2 flight, originally due to fly from Manchester to Rhodes on Monday, had to be diverted to Munich, Germany.

The video, which has been shared with the MailOnline, shows nine German police officers escorting the woman off the aircraft.

It is claimed she had already become frustrated during the flight because her request for free champagne was denied.

Despite having allegedly hit an air steward, the pensioner appears distressed as she is dragged towards the back of the plane, saying ‘help me’.

One police officer can be seen picking up the woman’s legs while the other police officers carried her off the flight head first. 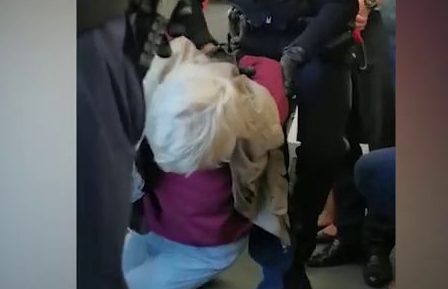 Video footage taken earlier on in the flight appears to show the pensioner slapping the air steward.

The air steward is seen leaning over her trying to calm her down.

A passenger, who wished to stay anonymous, claims the woman urinated in her seat before being taken off by the police.

‘A woman on the flight repeatedly asked the flight attendants for free champagne,’ they said.

‘She started swearing and having violent outbursts. At one point she got up and tried to open the cabin door mid flight.’

The passenger added: ‘At this point she was sat back down with two male passengers trying to hold her down as she was punching people.

‘She urinated over three seats and repeatedly had bursts of violent episodes until we had to make an emergency landing in Munich.’

The passenger, who said they had to wait in Germany for over two hours, added: ‘Jet2 handled this situation really well and the captain of the plane gave everyone complimentary drinks.’

A Jet2 spokesperson added: ‘We can confirm that flight LS819 from Manchester to Rhodes was diverted to Munich Airport yesterday so that a disruptive passenger could be offloaded.

‘We would like to apologise to customers for this unforeseen delay and any inconvenience caused.

‘The health and safety of our colleagues and customers remains our number one priority and, as a family friendly airline, we take a zero-tolerance approach to disruptive behaviour.

‘We will not hesitate to vigorously pursue any costs incurred as a result of this diversion.’