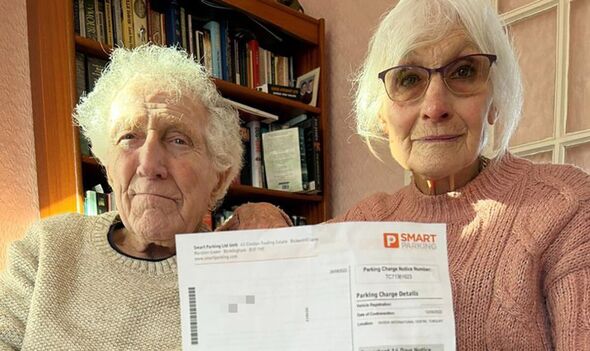 A pensioner on palliative care received a “ridiculous” parking ticket when he got his Covid booster vaccine.

Bob Pye, 86, now has seven days to pay up or legal action will be taken.

The grandfather, who has mobility issues, says staff told him to wait outside the vaccination centre in his wife Marge’s car on a double yellow line where they would come out to administer the shot.

But an automated camera photographed the car parked on the double yellows by the clinic in Torquay, Devon.

Appeals have since been made to Smart Parking and MP Kevin Foster, but it culminated this Monday with Debt Recovery Plus sending Mr Pye an ultimatum of paying the fine or legal action being taken.

Speaking today to Devon Live, Mr Pye’s grandson said: “It’s very ridiculous. We thought it had been dropped due to lack of communication but then I received the letter saying I owe £170 and if I don’t pay them that they will take me to court.

“Bearing in mind they’ve addressed this to me although I wasn’t even in the car, I’ve just been fighting it on behalf of my grandparents because they’re not exactly tech-savvy. It’s been going on for a while and it has caused quite a lot of anxiety.”

After calling Debt Recovery Plus, Mr Pye’s grandson said: “I rang them yesterday to say I wasn’t the driver and also just to see why it’s gone to threatening to take me to court. In the five-minute conversation we had, they asked me ‘are you going to make the payment’ a minimum of five or six times.

“We’re not the only people who have been stung by this as well. I do believe other people that are in similar situations have received fines as well from what I’ve heard.”