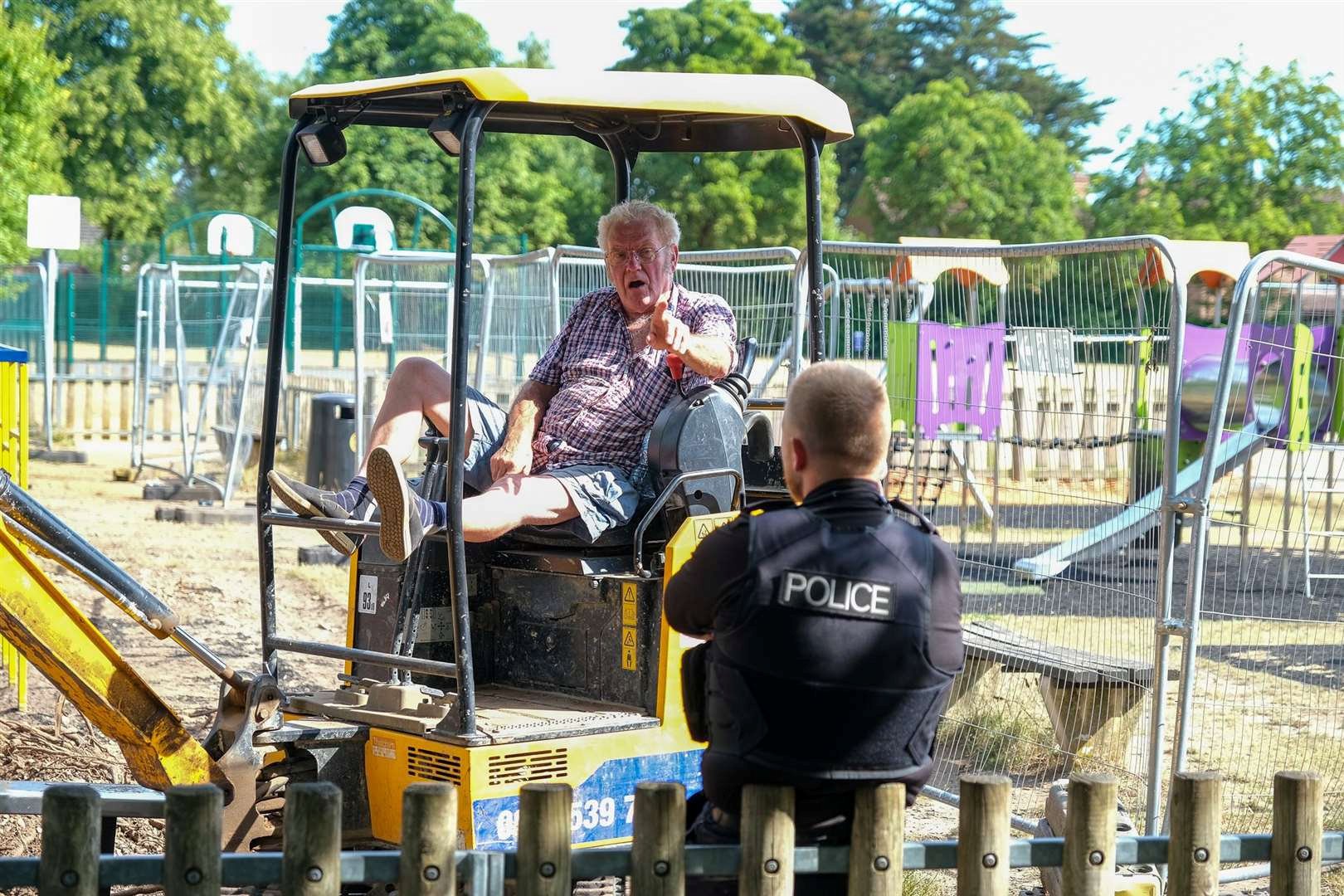 A pensioner hijacked a digger and staged a four-hour long protest to ‘protect’ nearby cherry trees from a council.

Retired tree surgeon Lea Awbery, 66, refused to leave on Monday when he saw contractors digging up roots – something that he believes will leave them dying of starvation.

He claims the move is designed to kill the cherry trees so that Burghfield Parish Council can create an entrance to a proposed controversial café that has divided Burghfield villagers in recent weeks.

But officials insist they removed the roots to prevent a disease spreading after a badly suffering tree had to be taken away two years ago.

They say it was a good opportunity to tie this in with the re-surfacing of the children’s play area on the corner of Burghfield Common’s Recreation Ground, near Reading, Berks.

A crowd of villagers gathered to watch and police tried to convince Lea to get down from the digger, but he said: ‘The trees will not be able to survive the damage [the parish council] have done.

‘Somebody has got to make a stand for the village and the trees. It’s as simple as that and that’s why I am sat on this digger.

Lea’s family have been living in the village since the 12th Century. ‘My roots are here, unlike these tree roots which are not connected to the trees anymore’, he says.

The pensioner, who suffers from lung disease, osteoarthritis, diabetes, and hyperglycaemia, blocked contractors from working from around 1.30pm.

He demanded a promise in writing that the council would re-plant the trees if they died – but was forced to leave around 5pm as he needed to take some medication.

His protest was also directed at the parish council’s proposed temporary café development, which he claims has been proposed so ‘they don’t have to pay rates or rent and they get a cheap pub in the village’.

More than 130 letters of objection have been put in, with opponents claiming it will lead to more anti-social behaviour in the area.

But there have been more than 70 letters of support from others, who think it would be a much-needed social space for people in the community.

Speaking of the protest, Tim Ansell, chairman of the parish council, said: ‘I think it’s quite sad to be honest.

‘He’d already phoned up the clerk and hurled abuse at her this morning, which is unforgivable and there is no reason for that.

‘It’s sad and depressing that people get it in their minds that this is the way to do it.’

He added that the council’s priority is ‘the safety of the other trees and getting the children’s play area ready for the school holidays’.

‘I find the division [over the cafe plan] very sad’, Mr Ansell added. ‘I also know that a lot of that division is caused by a minority who have been spreading untruths.

‘Their tactic on a number of things has been to create a divide so that ideally they think the parish council will give up, whereas it’s our job to do what the majority of the people require.’