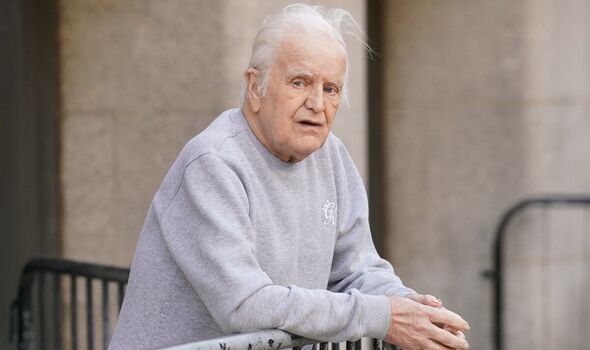 Edward Turpin has been spared jail time after being called back to court for refusing to wear an electronic tag. The 90-year-old was handed two years imprisonment suspended for two years earlier this year after stabbing his wife, Joan Turpin, also 90, in the chest four times. Turpin attacked his wife at their home in Orpington, south-east London, after nearly 70 years of marriage, saying he “couldn’t take it anymore”.

Mrs Turpin recorded a video while she was in hospital detailing what happened to her.

She said: “He woke me up with the knife in my chest, telling me he couldn’t take any more.

“It made him ill and then the knife went in. I was screaming for help.”

Upon sentencing, Turpin was also handed an electronically monitored curfew between 9pm and 7am for three months.

But prosecutor Alistair Richardson told the Old Bailey a number of attempts had been made to install the tag.

Mr Richardson said the first two had been at 10.48pm and 11.48pm and Turpin did not answer the door.

Following that his niece requested a daytime appointment but Turpin refused to have the equipment installed.

Mr Richardson said that because there had been a breach of the suspended sentence the court must activate the prison sentence unless it would be unjust to do so.

Simon Gledhill, mitigating told the court that the late-night attempts had been “traumatic” for Turpin.

Judge Alexia Durran spared Turpin saying sending him to prison would be “unjust”.

Judge Durran told the defendant: “There may have been some confusion about what the order was and I can well understand why you were distressed by people arriving very late at night, it’s not nice for anybody and particularly for someone of your age.

“Strictly speaking I am meant to send you to prison today because you have not complied with the order I have made.

She added that it is “important” Turpin comply and let them install the tag, extending the order to three months and seven days.

Following the attack on his wife Turpin called the emergency services and said: ‘I can’t take any more of it…she’s been ill and it’s got right on top of me.’

He denied it and was cleared of attempted murder and wounding with intent to cause grievous bodily harm.

He was convicted of unlawful wounding.